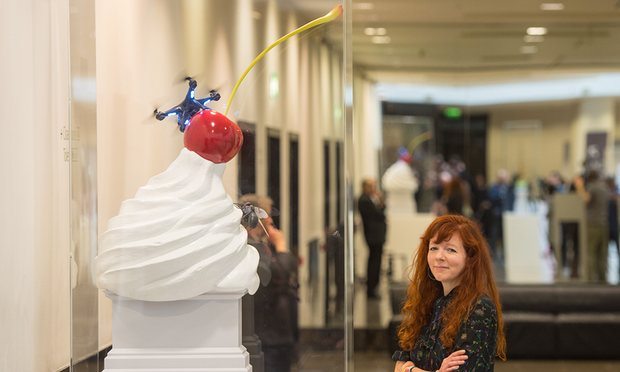 Artist Heather Phillipson with a model of The End, her fourth plinth proposal, at the National Gallery in London. Photograph: Dominic Lipinski/PA

A huge splodge of cream with a cherry on top and a recreation of an ancient winged bull destroyed by Islamic State are among proposals for the next fourth plinth artwork.

Organisers of the popular contemporary art commission revealed a shortlist of five ideas. From those, two will be chosen to occupy the plinth in Trafalgar Square, central London, in 2018 and 2020.

This year’s shortlist is more international than it has ever been, said Justine Simons, London’s deputy mayor for culture, with proposals by artists from Pakistan, Mexico, India, the US and the UK.

She said the plinth artworks always delighted and divided opinion – and that was a good thing. “We love the way the project turns everyone into an art critic.”

The sole British artist on the list is Heather Phillipson who is proposing a giant fibreglass model of a dessert being eaten by a fly. There will also be a drone flying overhead with a camera and the idea is that onlookers will be able to watch the live feed on their phone or tablet.

“You are taking the place of that omnipresent eye,” said Phillipson. “There’s an element of surveillance but also broadcast so you can watch it back and view other people.”

She chose whipped cream because it is an extravagance, but also unstable and always on the verge of potential collapse, she said.

The winged bull is the idea of Iraqi-American artist Michael Rakowitz who for 10 years, with a team of assistants, has been reconstructing artefacts looted from the National Museum of Iraq after the US-led invasion.

The fourth plinth is about 14ft long, which he realised was the same size as the lamassu, a protective deity that stood at the entrance to Nergal gate into the city of Nineveh from about 700BC. In 2015 it was destroyed by Isis along with other artefacts in Mosul Museum.

“There used to be 30m date palms in Iraq when it was the leading exporter of dates in the world in the 70s. After the Iran-Iraq war it fell to 16m, and since the 2003 invasion it is less than 3m.

“The hope is that this project intersects not only the cultural tragedy but the human tragedy and the ecological tragedy, so it becomes an effigy for all those things and it haunts. It is supposed to be a ghost more than a reconstruction.”

Rakowitz said Iraqi date syrup was the best in the world and to prove it he proposed offering onlookers samples in plastic cups. “It’s good for you; it gives you energy.”

Perhaps the most amusing proposal came from Mexican artist Damián Ortega, who wants to recreate an image he spotted in a magazine.

He saw a photograph of a truck on which a scaffold and ladders had been put to enable workers to change lightbulbs over a highway. To get the ladders higher, some oil drums had been inserted.

“Do not try this at home, it is insane,” said Ortega. “I always love these events when people need to transform one object into something else and it has a double life. I like how these guys found their solution, I thought it was a beautiful example of surviving and imagination.”

The proposal from Raqs Media Collective, a Delhi-based trio, is a work called The Emperor’s Old Clothes. It is inspired by a British empire relic statue which stands in Coronation Park, Delhi.

The body has been removed in the proposal for London, leaving just an empty robe. It represents the ghost of the past and a warning for the future, the artists said.

The fifth proposal is by the New York-based Pakistani artist Huma Bhabha, who wants to create a figure from brown cork and white polystyrene that looks like it could feature in a science fiction movie.

All five proposals can be seen at the National Gallery for the next two months and the winners will be announced in March.

The winning submissions will follow on from the present incumbent, a 7-metre high thumbs-up by David Shrigley, which is on the plinth until March 2018.

• Maquettes are on display in the National Gallery’s Annenberg Court until 26 March.