A second coat: why painting is the comeback art of the 21st century - FAD Magazine
Skip to content 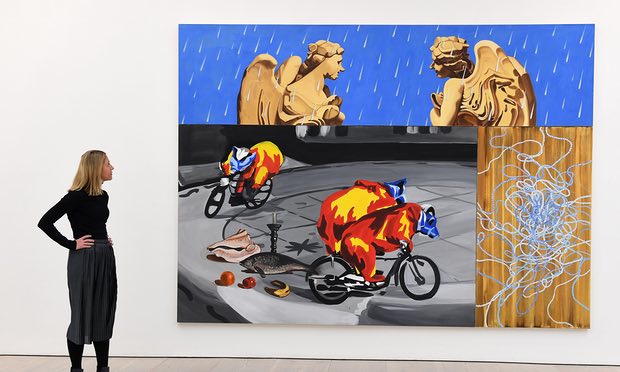 Could just as easily be painted on a wall in London or Cairo … David Salle’s Angels in the Rain (1998) at the Saatchi gallery. Photograph: Andy Rain/EPA

This article titled “A second coat: why painting is the comeback art of the 21st century” was written by Jonathan Jones, for theguardian.com on Thursday 1st December 2016 16.13 UTC

It seems only yesterday that painting was “dead”. Now it’s everywhere. In London, galleries east of Spitalfields are full of the stuff. Recently, visiting an exhibition by a painter friend, I was chatting to the young artist who runs the gallery – which doubles up as his painting studio. Opening a hidden cupboard, he took out some of his big, sprawling canvases, great stuff full of political imagery and existential angst. And that’s just inside galleries. Never mind the paintings in the streets that are so much a part of 21st-century life. Painting dead? If so we must be suffering the attack of the zombie painters, because this old art is invading every corner of the modern world from the coolest corners of the art world to underneath your local railway bridge.

One place you won’t find it is the Turner prize. This year’s Turner is one of the most paint-free ever. Get with it, daddio – don’t you know the gooey stuff is where it’s at? As if to show up the out-of-touch Tate – which also pretty much excluded painting from the opening displays in its otherwise excellent Switch House at Tate Modern – the Saatchi Gallery has just opened a show as full of paintings as the Turner prize is free of them.

Its show Painters’ Painters is also brimming with visitors. Maybe, after years of being told by po-faced curators that we “should” revere video art and various live interactive post-artistic phenomena, we just wanna have fun. Because the paintings in the Saatchi really are a lot of fun. Even the artists I don’t much rate here look as if they are enjoying themselves, and the good mood is infectious.

One thing that strikes me is that new painting in galleries now looks very like street art. The big, playful paintings in this exhibition, from Dexter Dalwood’s fantasy landscape mash-ups to David Salle’s postmodern explosions of thought and colour, could just as easily be painted on a wall in London or Cairo as on canvas.

That is the secret of painting’s big comeback. In the 1990s, conceptual and new media art looked like the future, but such art has one huge drawback. It is inherently elitist. It depends on the framing device of the white cube gallery or museum. Show a video art masterpiece on telly and it’s just another TV programme. When the lights go on and off in your front room, it means the electricity is on the blink. There is something very fragile about all this neo-conceptualism, which can only exist within a finely tuned curatorial apparatus.

Painting, by contrast, works wherever you put it. From the National Gallery to an ice age cave to the wall of a chippy, it’s simply paint that has been used by a human to make meaningful marks. That’s why painting is everywhere – because it can go everywhere, and still be some kind of art. So painting, with its long history and high cultural status, its tradition that includes Titian and Rembandt and Rothko, has become the popular art of our time.

At the Saatchi, it is the accessibility and lightheartedness of painting today that is so joyously impressive. These paintings make you want to pick up a brush and have a go. There are clearly no rules any more. Told by postmodern theorists that painting cannot be a serious art for our age, painters have taken these bores at their word and decided not to be heavyweight or anxious, just free. The results are hugely varied in quality but magnificently exuberant.

Oh yes, and the Saatchi exhibition has one genius in it. Ryan Mosley shares the others’ humorous abandon but adds a manic, mysterious imagination and brilliance of colour all his own. I wafted pleasantly through other rooms but was held in a different way by Mosley. His bizarre characters evoke a carnival world of surreal nightlife and macabre theatre – monsters that can only live in a painting, or maybe Francis Bacon’s Soho. Their grotesque faces, tragicomic anatomies and enigmatic postures make for freakishly compelling images. What makes them live as painting is, however, Mosley’s extraordinary, subtle, kaleidoscopic sense of colour. He was born in Chesterfield in 1980, so he’s well within the age limit for next year’s Turner prize. I’d like to see him in it, or a residency at the National Gallery, or decorating a car park wall. It doesn’t matter. Painting as good as this is magic wherever it is.