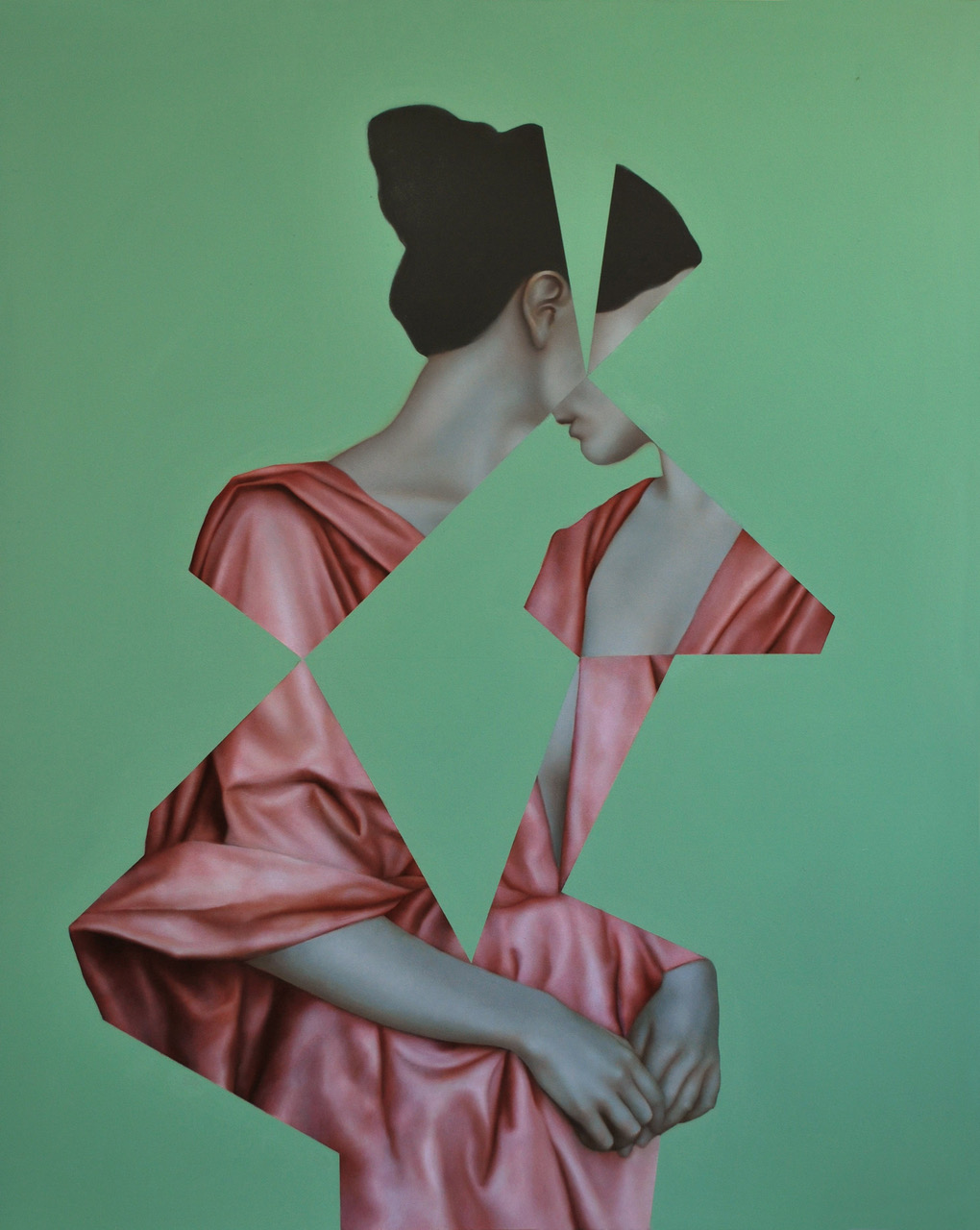 Women run, float, and appear suspended mid-action amidst dramatic swathes of colour – blue, teal, pink and gold. Classical features and smooth marble-like skin are draped in fold upon luscious fold of silken fabric. We, the viewer, feel we are intruding on private moments.

The characters recline, or move like dancers, they turn their head so their gaze never falls upon us. “Pax Romana” by Juliette Mahieux Bartoli at Kristin Hjellegjerde presents an exploration of hybrid or amalgamated identity, of a 21st century state of mind, with roots in our collective history. For, while these protagonists are spliced, diced, cut up and blotted out, it is in this very fragmentation that the artist finds unity. 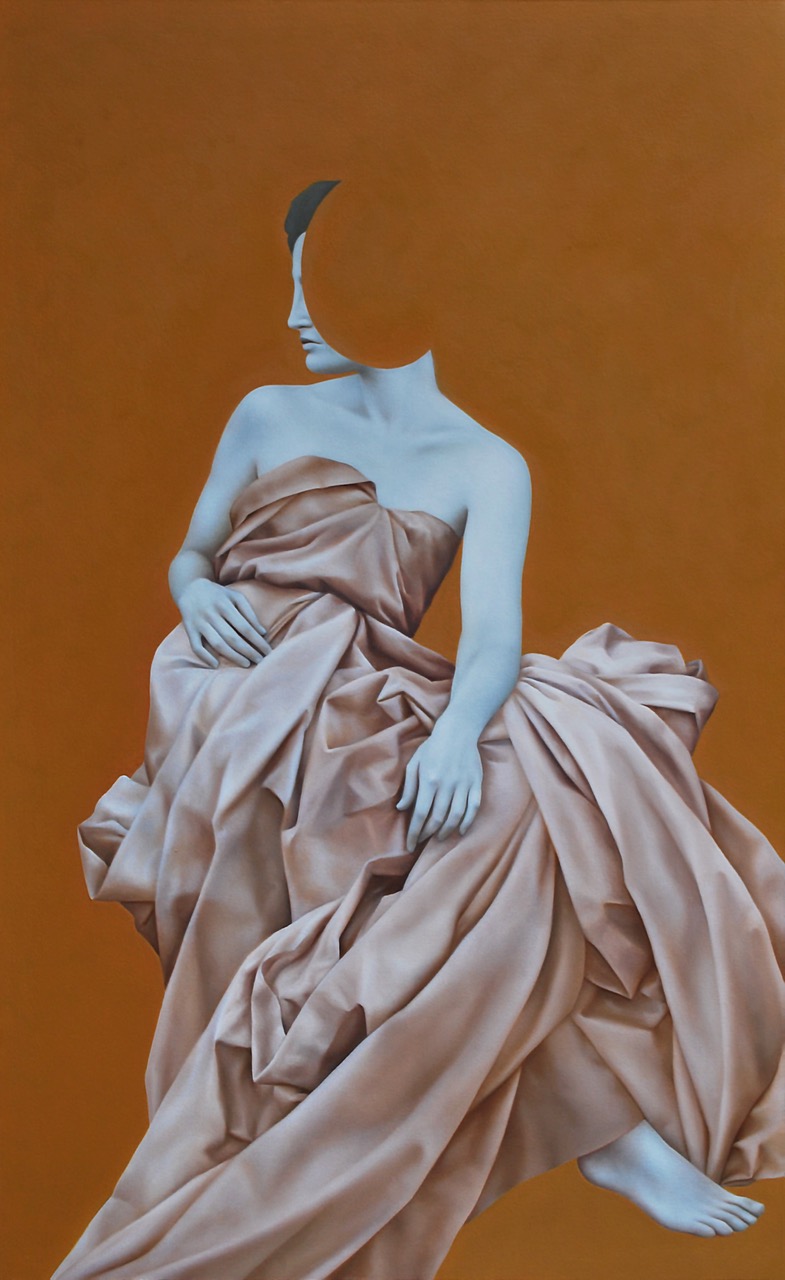 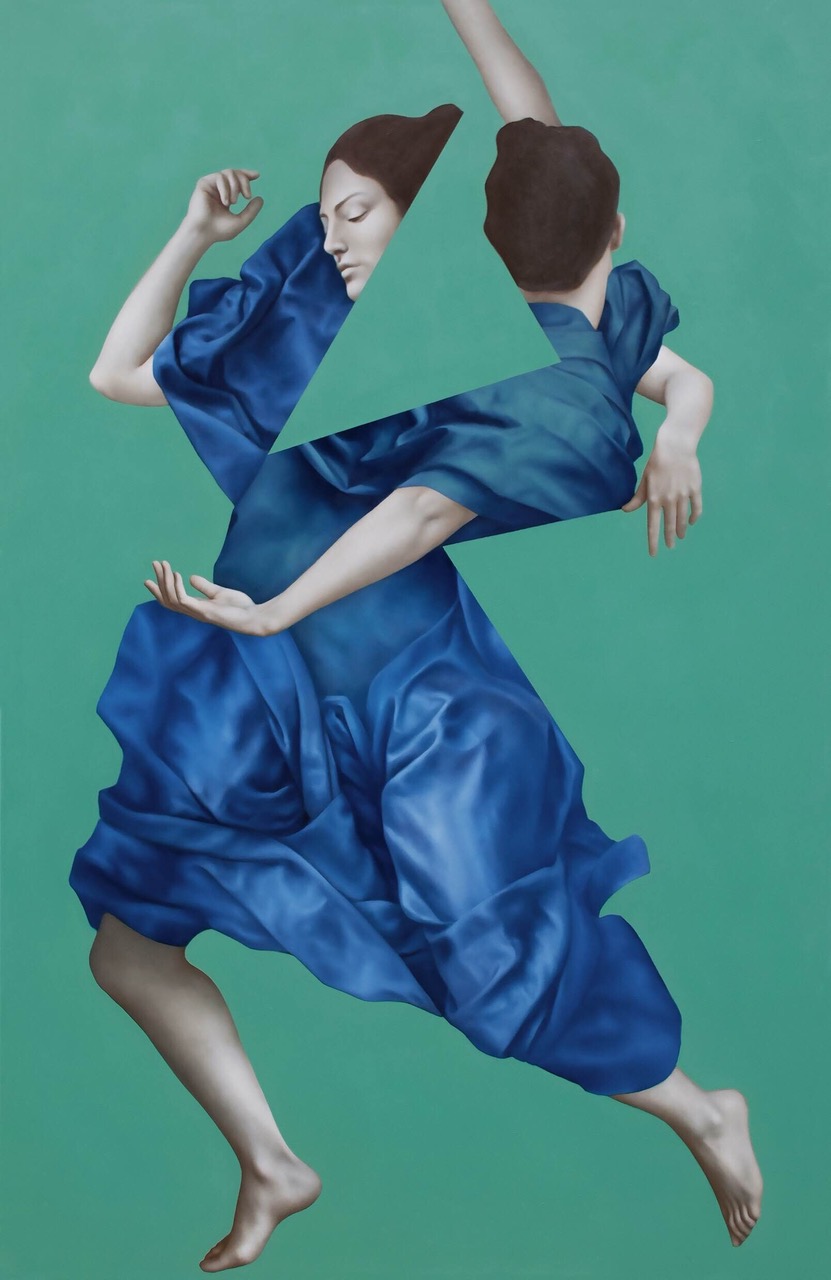 The Pax Romana marked a 200-year peace that existed in Europe under the Roman Empire. Ancient Rome was responsible for much of the cross-fertilisation of cultures, languages and peoples in the Ancient World. Fast forward a couple of thousand years and while much has changed, we face many of the same issues as globalisation creates an ever-larger melting pot. Working by combining Renaissance painting techniques with abstract geometry, Mahieux creates fragmented figures designed to reflect individuals who are made up of multiple cultural facets while remaining a coherent whole. She argues that this is ubiquitous to 21st century life, where few people are truly culturally singular.

As such, while splintered, the characters in Mahieux’s paintings are unified in their multiple facets, a compound of awkwardly harmonious limbs and heads and gaps. They form a single intelligent entity moving within a universe of flat, bright colour. Mahieux imbues these characters with a sense of confidence, strength and purpose. She explores the flat geometry of fragmentation, using drapery as a compositional device which, for the artist, bridges elements of abstraction and representation. She uses these sharp-edged pieces of drapery to create contrast, drawing attention to their tactile sensuality and keeping a focus on their colour and form.

Mahieux’s making process seeks to reflect the complexity of 21st century existence. She photographs herself while playing – in a return to child-like make-believe, and these accidental poses reveal archetypal gestures. This process reflects the way in which cultures exist both within and without us. “When we are children we are unaware of the broader constructs and events around us: history, politics, literature and art,” Mahieux explains. “Yet they influence the narratives we play out because they are our context.” She then chooses, combines, and cuts these images into a composition. This is then executed in oil paint, using an aesthetic language infused with the Italian Renaissance. To illustrate the cultural diversity of each character, they are each given a first and a last name. The first is after a figure from Greek or Roman mythology which echoes their personality – a proto-name, a paradigm, as it were, harking back to some of the earliest roots of civilization and mythology. The last name is the colour of the background. Mahieux wishes the last name to be translated when the pieces are shown or spoken about in other languages, but the first to remain: Eos Red can become Eos Rosso or Eos Rouge, for example, reflecting the adaptable nature of identity: parts of us change, parts remain the same.

Mahieux explores the nuances and subtleties of cultural difference, and the subconscious and conscious moments integral to the formation of our selves. We are like sponges, she argues, absorbing influences from a young age – and in the case of displacement, incorporating multiple cultures. The way in which these figures are delicately spliced together reflects the eclectic nature of so many people’s identities. We live in a global world, where centuries of travel, exchange, conflict and migration have shaped new, rich and diverse identities – where the whole is greater than the sum of its parts.

About the artist
Juliette Mahieux Bartoli is a French-Italian artist born in the United States. She grew up between Washington DC, Paris, Geneva, and Rome. Mahieux Bartoli attended classes at the Prince’s Drawing School, from where she went on to complete an MA in Fine Art at City & Guilds of London Art School in 2012, as well as a BA (Hons) in History of Art and an MA (Cantab) from the University of Cambridge in 2010. Recent solo exhibitions include Mise en Abîme, Art Bermondsey, London (2014), while group shows include Made, Chance Gallery, London and Four Seasons, Kristin Hjellegjerde, London (both 2013). She currently lives and works in London.