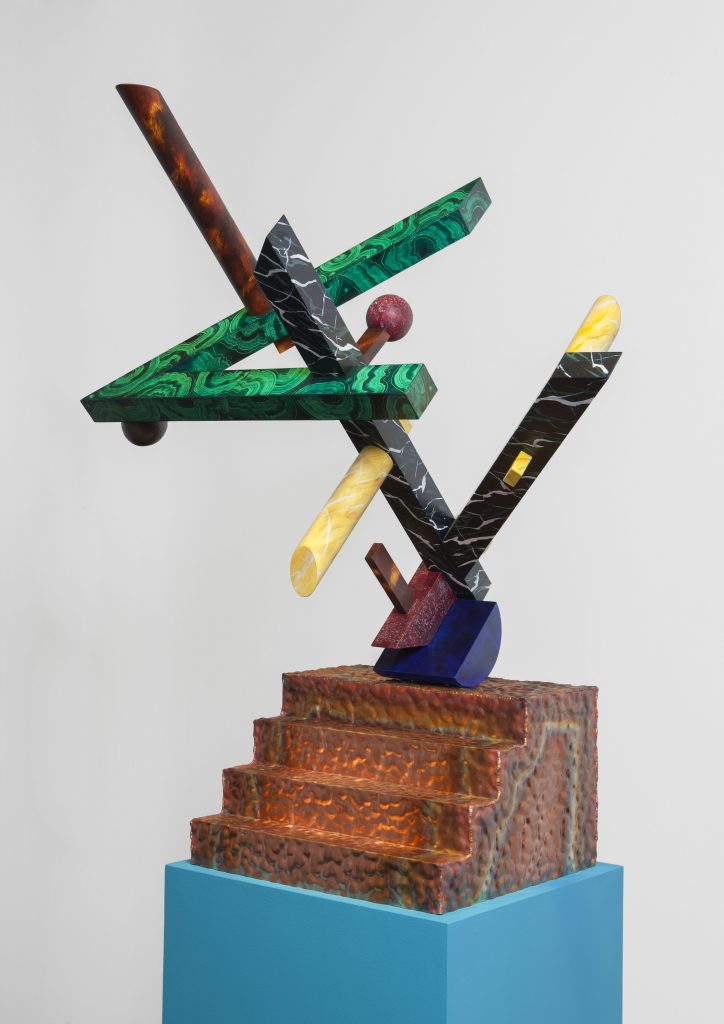 Coco Crampton’s current solo show in London takes place in a bespoke jewellery store in Mayfair called Belmacz (until 23rd December 2016). Close to Claridge’s and Cipriani’s on Davies Street, there is a petite glass storefront – a tiny gem of a shop run by the talented jewellery designer Julia Muggenburg who has curated art exhibitions alongside her precious stones since 2011.  Cleared of all evidence of a retail establishment (except for a small glass display case along one wall), three custom-made turquoise plinths can be seen through the window, holding up the most exquisitely constructed sculptures that combine beaten copper, glazed ceramics and wood painted in various faux finishes that replicate the appearance of materials such as marble, wood and stone.  A black and white knitted jumper and trousers, complete with pink glazed ceramic nipples, hangs on the wall next to the display case. 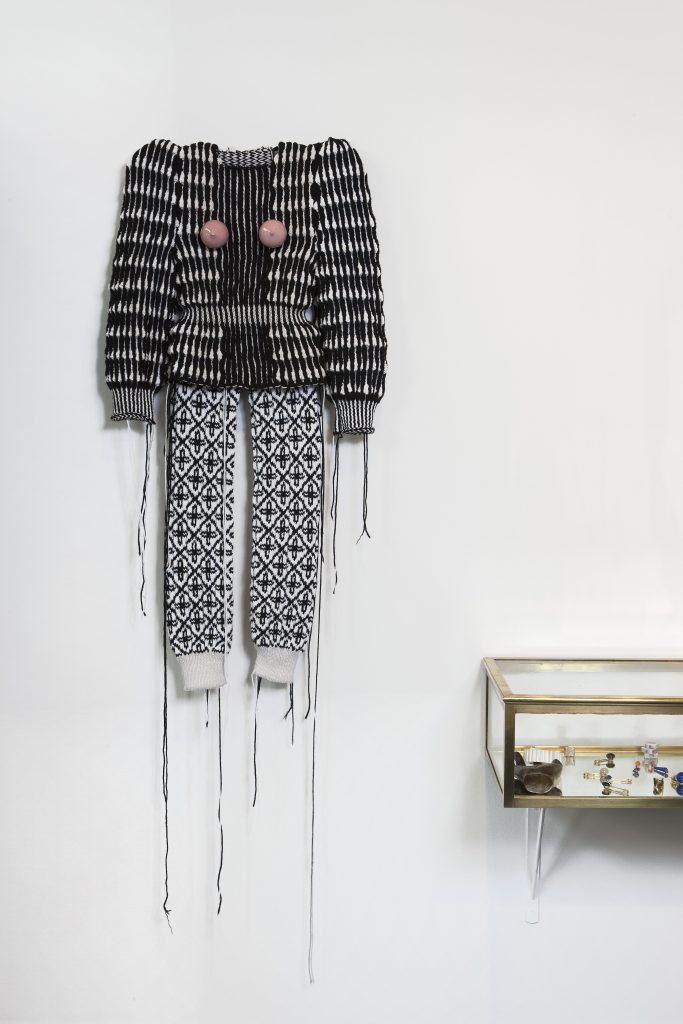 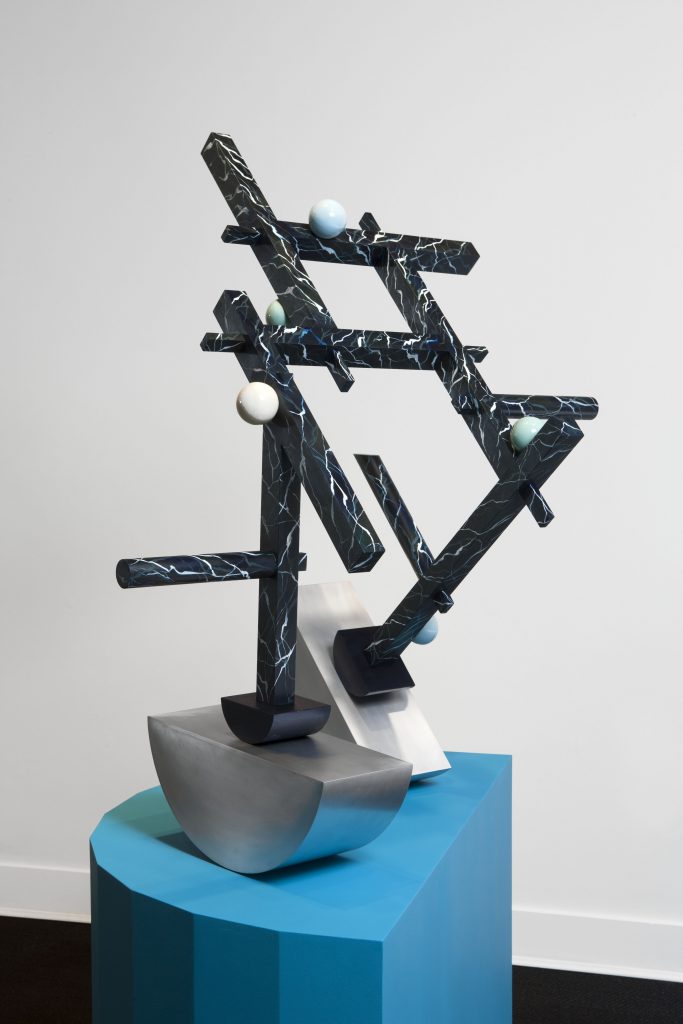 Crampton’s approach to craft and making is a perfect fit with Muggenburg’s finely crafted pieces of jewellery on display. The structures that Crampton has built for the presentation of her sculptures also mimic the display strategies often employed by high-end boutiques and fashion brands. Reminiscent of the work of the Memphis Group of designers in Milan in the 1980’s, in colour, form and materiality, Crampton’s new works slyly straddle the line between craft and fine art, hinting at functionality and playing with various textures and materials. Since she graduated from the Royal Academy Schools in 2014, Crampton has continually surprised viewers with her mastery of new skills – from welding steel and beating copper to woodworking, designing light fixtures, throwing pots and knitting, embroidering and upholstering various textiles.

Featuring three sculptures that resemble shade trees spreading their branches in all directions, the exhibition entitled “Bowers: from form to public” invites the viewer to perform a dance of sorts under the arbour created by these sculptural forms, like a bird fluttering around a garden looking for its hatchling.  Accompanying this exhibition are three commissioned poems by Daniel C. Blight. Picking out a few choice lines of verse, Crampton’s work comes alive.

“In movement we will live

A place in the garden

With her unique sculptural language, Crampton is a confident young artist whose work demands to be seen. 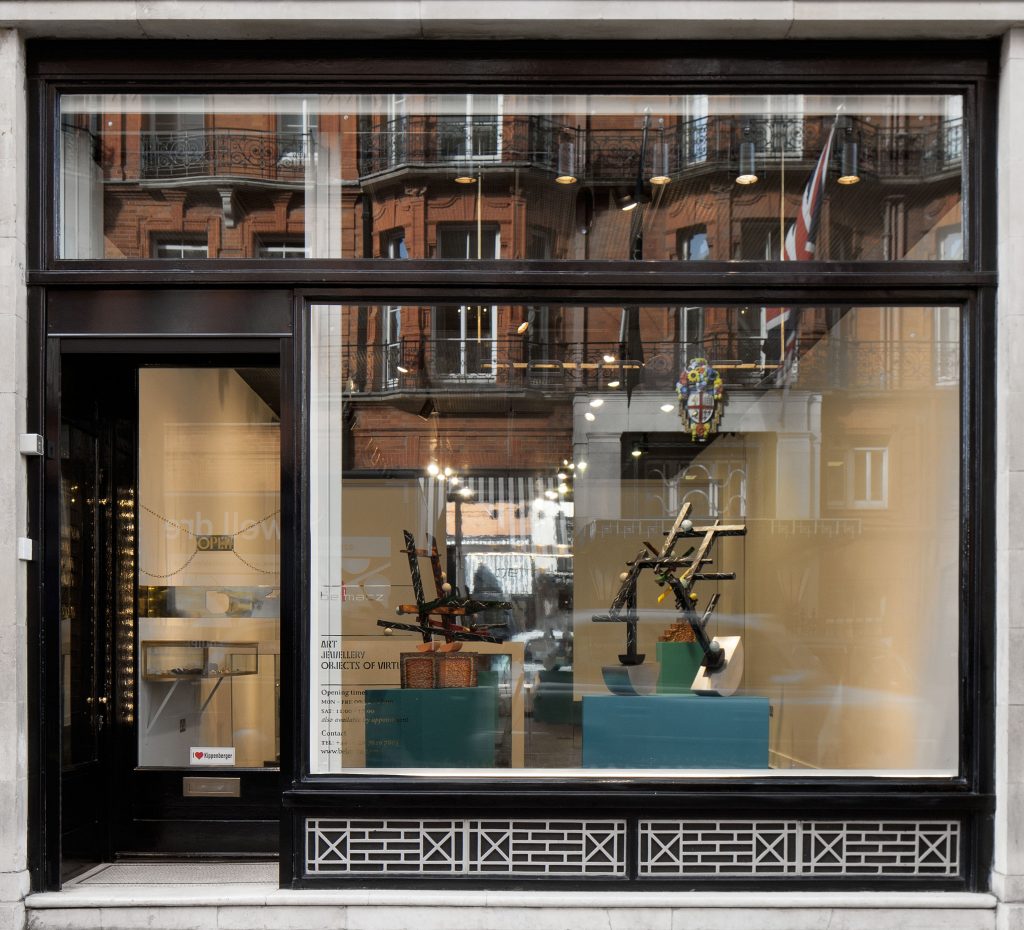