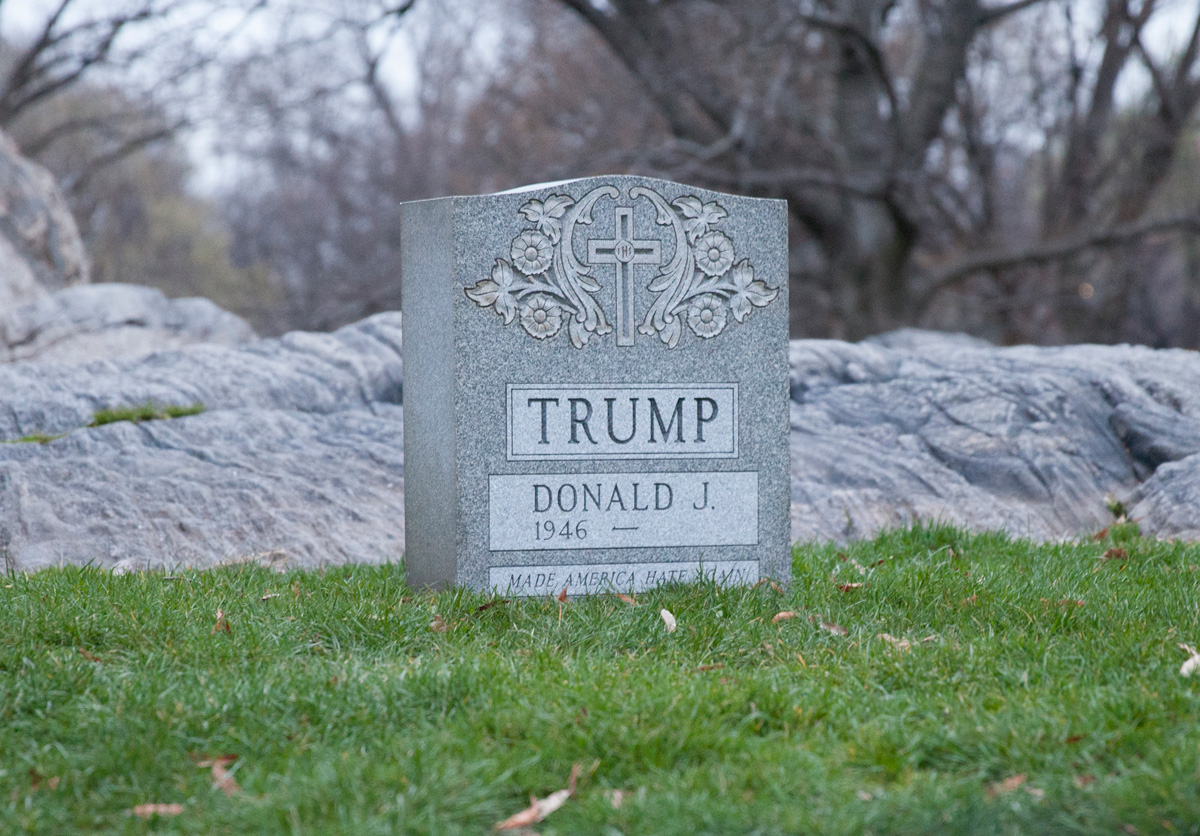 Curated by gallery artist Alfred Steiner, Why I Want to Fuck Donald Trump will open October 13th, and run concurrently with the 2016 presidential election. This curated group of artists thematically tied to JG Ballard’s 1967 essay

“Why I Want to Fuck Ronald Reagan”

, will be a visual discussion of this satirical piece which not only predicted Regan’s presidency, but in many ways, Donald Trump’s candidacy. Using Ballard’s essay as a springboard for political discourse, Why I Want to Fuck Donald Trump includes numerous artists whose work collectively comments on the intersection of American politics and the over-sexualized cult of celebrity, as well as the sensationalism surrounding politics, crystallized in this election. 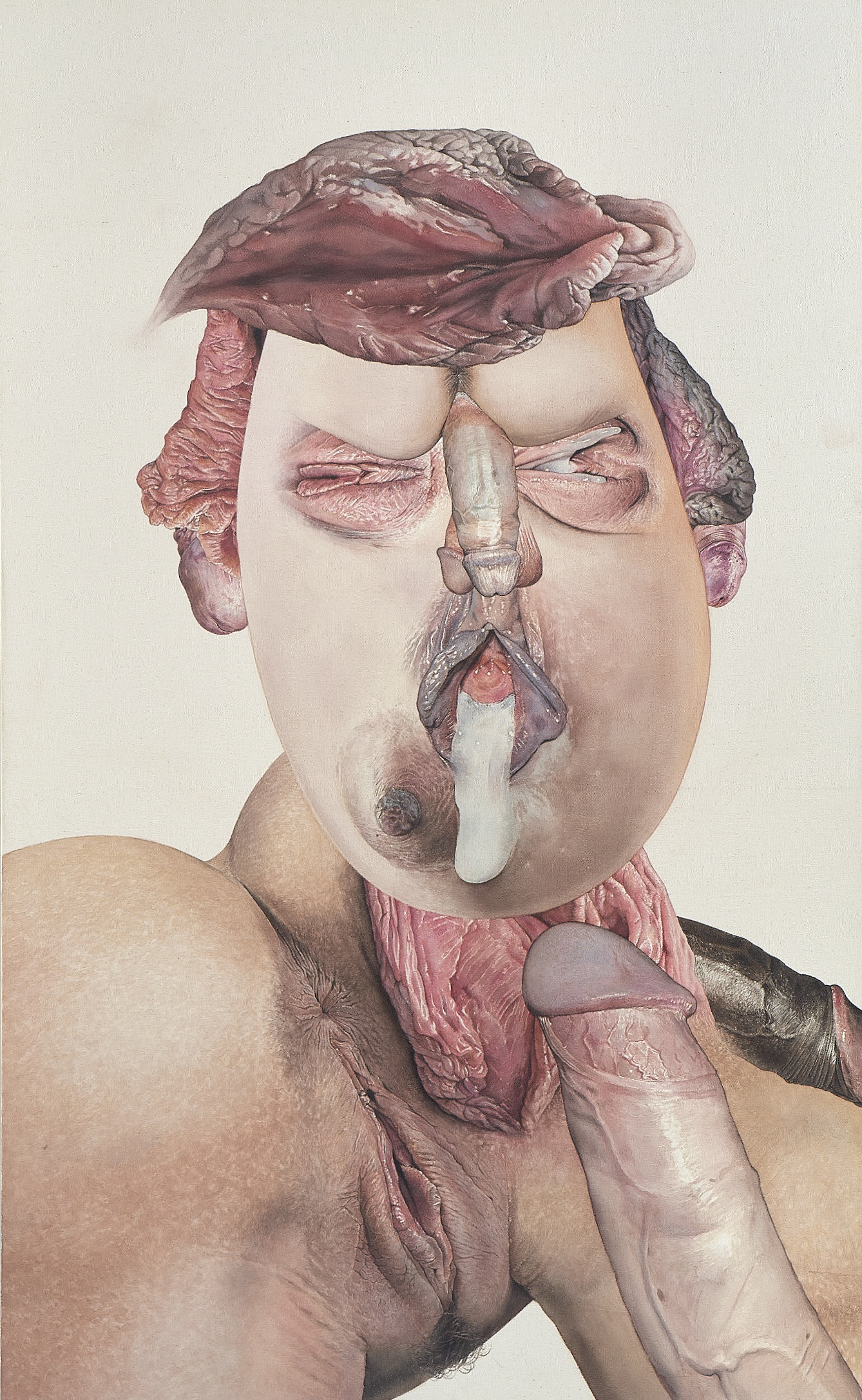 The exhibiting artists discuss these heroes and idols within this critical context, exposing the fragility and fantasy we apply to politicians, in the same way these facades are constructed for celebrities. Taking these public figures off their soap boxes and pedestals, forces us to question our own understanding of the constructed “truth” that we surround them with. Utilizing caricature, parody, and social and political pastiches, these artists highlight a pervasive critique of the current political climate as one that has dangerously welded politicians and celebrities as one. 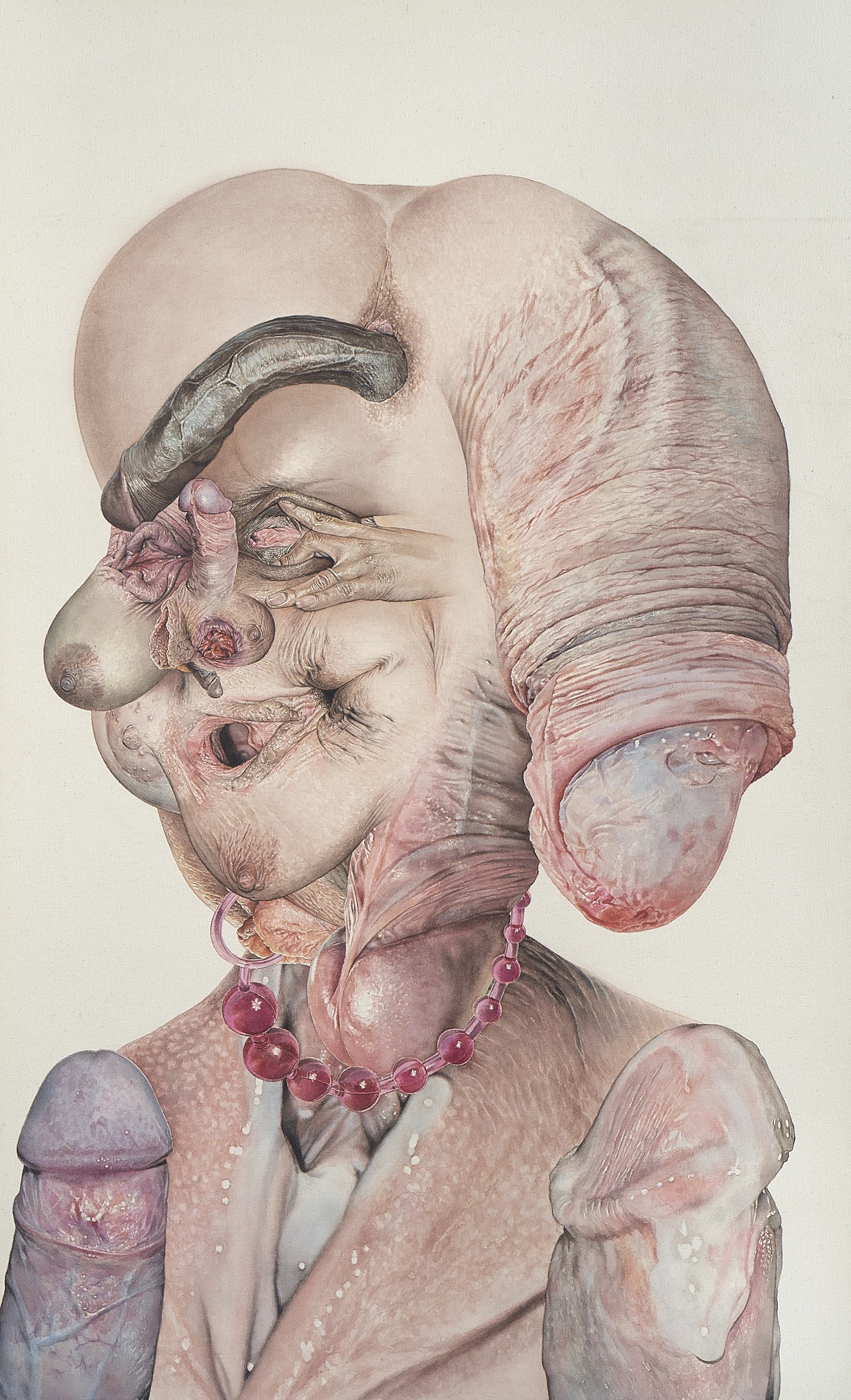 Alfred Steiner’s grotesque caricatures of Donald Trump and Hilary Clinton combine numerous hardcore pornographic images of male and female genitalia to build the facial structures of each politician. Literally illustrating Ballard’s speculation of “the probability of presidential figures being perceived primarily in genital terms,” the uncanny watercolor portraits create a sense of recognition. Similarly, in a response to the presence of over-sexualized imagery in Western culture, Jonathan Yeo’s unauthorized portrait of George W. Bush is pieced together from clippings of pornographic magazines, while Tom Sanford’s caricatures Trump Mao and Clinton Mao superimpose hair and facial features of the American figures over an official portrait of Chairman Mao, converging their influence and values.

Using various forms of parody, artists Rebecca Goyette, Aaron Johnson, Tim Davis, and Lamar Peterson employ a satirical approach to expose the constructed truths surrounding public figures. Goyette’s video Ghost Bitch USA stages a revenge witch hunt, with Trump playing the role of the persecuted. In Johnson’s reverse painting The Burial of Liberty, a ghoulish Trump is depicted alongside Uncle Sam, Marilyn Monroe, and JFK burying the Statue of Liberty: a beacon of hope and freedom. Continuing this approach, Tim Davis’ Seven Entertainers equates American politics with sex and celebrity, with Hillary Clinton sandwiched between over sexualized presidents and fictional characters: Bill Clinton, JFK, Xena Warrior Princess, Buffy the Vampire Slayer, and others. This juxtaposition of their photographed image as flattened, cardboard figures creates a lack of humanity and substance. Assisting in creating these constructed identities, Lamar Peterson points a finger at the newscaster’s role in spinning sensational stories, illustrated via his portrait of an anchorman with a disfigured mouth. 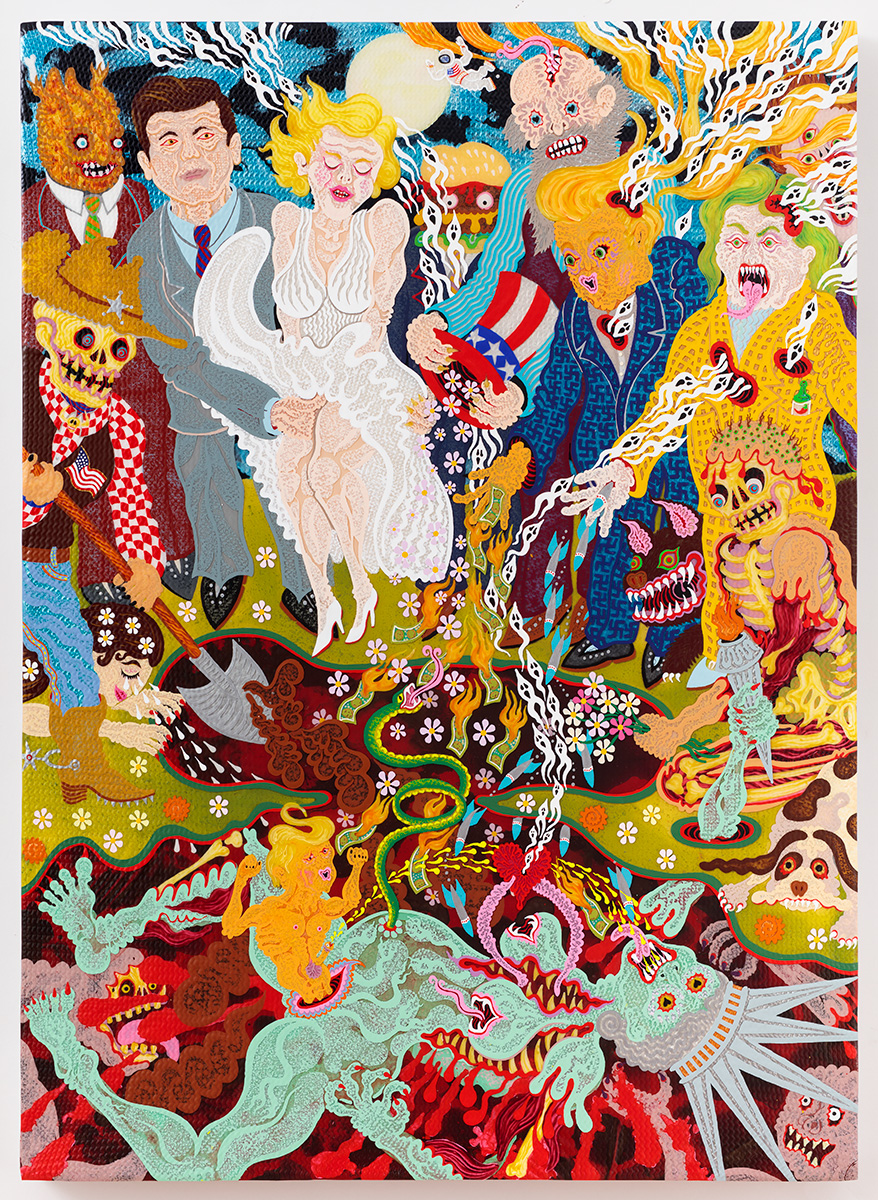 Giving voice to marginalized groups, Ana Wolovick’s painting You Are Leaving the American Sector suggests a world where Trump has succeeded in erecting a wall between Mexico and the United States. Adding to this bleak prediction, Brian Andrew Whiteley’s The Legacy Stone Project (The Donald Trump Tombstone) depicts Trump’s tombstone with the epitaph “Made America Hate Again.” The unauthorized original installation of the tombstone in Central Park in early 2016 was not intended to call for the death of Trump, but instead to urge him to rethink his legacy during this tense election year. The work will be installed in the Gallery with evidence tags attached from its earlier seizure for criminal investigation. Sergio Muñoz Sarmiento will exhibit a new work: Here I Sit, Lonely Hearted, Came to Shit but Only Farted, a discarded inverted Obama HOPE rally sign penetrates a stack of car tires and a girl’s tyke bike with a hand scrawled sign reading “FREE.” The choice of items in Sarmiento’s piece suggest the class conflict and loss of faith that has characterized recent presidential contests, while their arrangement suggests the sexual scandals that plague Democratic politicians. Continuing with sculpture, Kris Kuksi will release a bronze edition of Bank Tank, a monolithic bank atop a war tank, pointing the finger at the bureaucratic nature of the American economy. 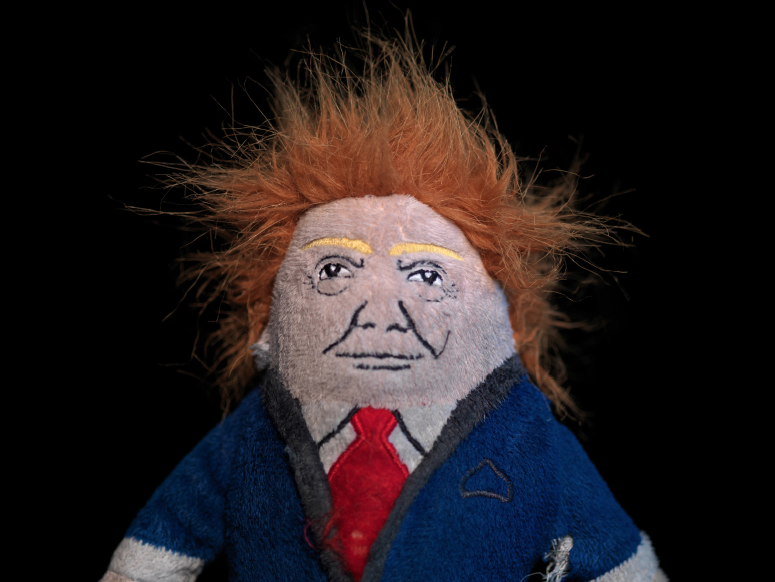 Other artists turn to Venn diagrams and data collection to address the perils of politics and public service. In Patrick Meagher’s The Most Notable and Selfless Profession, bubbles amass like pop up windows on a desktop, such as Liberalism versus Conservatism, while ironically in opposition to the artwork’s title, “pretending to be something you’re not” intersects three circles reading “SATAN,” “HALLOWEEN,” and “POLITICS.” In this vein, William Powhida will interject his wry criticism with a new text-based work. 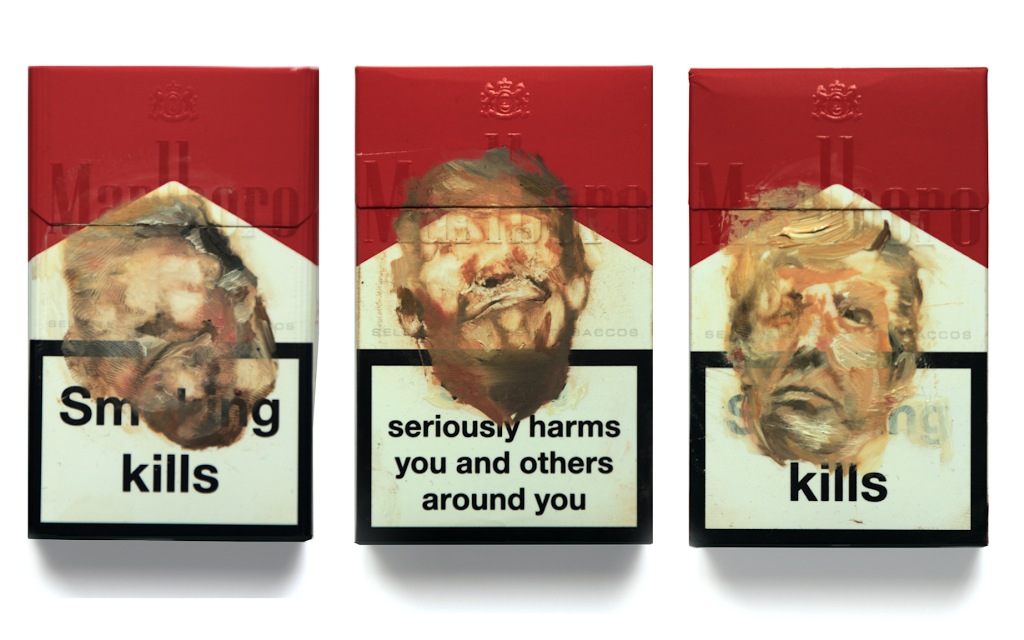