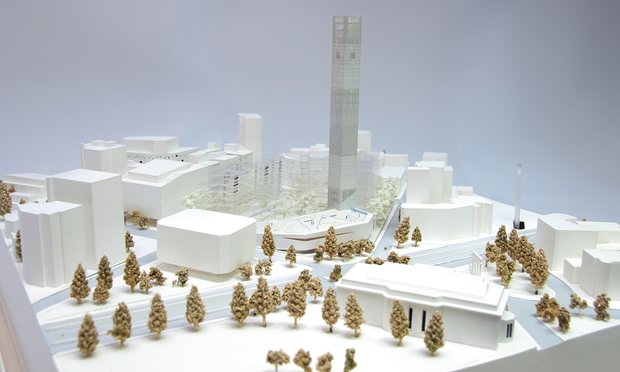 An architect’s model of the Beirut Museum of Art. Photograph: BeMA

Beirut is to get a new modern art museum with a design inspired by Italian campaniles and Arabic minarets.

BeMA, the Beirut Museum of Art, will feature a slender tower rising 124 metres into the sky, according to designs by the winner of an architectural competition revealed on Thursday.

An international jury has selected the Paris-based Lebanese architect Hala Wardé to oversee the complex on what the project backers describe as “a symbolically charged site that once marked the dividing lines in the Lebanese civil war”.

The art will be drawn from 2,300 works from the early 1900s to 2015 including pieces by 470 Lebanese artists collected by Lebanon’s ministry of culture, and the first exhibition is scheduled to open in 2020. One thousand works have been chosen to form the basis of the museum’s permanent collection.

Many of the works are currently hanging in Lebanon’s presidential palaces, parliament and on the walls of government buildings. They will undergo cleaning, with the help of the German embassy, before being rehung in the new galleries at the base of the tower.

The architectural competition jury was led by Lord Palumbo, the chairman of the Pritzker prize for architecture, and included Lord Rogers, the co-architect of the Pompidou Centre in Paris, and the late Zaha Hadid, the Iraq-born British architect.

In a statement, the jurors said Wardé’s design was a “totemic tower” that would “act as a beacon, evocative of the historical structures of treasury, lighthouse, outlook tower, belvedere and campanile”.

The tower will be divided into a dozen 12-metre cubes. The lower three will act as circulation spaces for the main galleries while the rest will house a library, temporary exhibition spaces, artists in residence and classes.

It will be located on a site owned by the Université Saint-Joseph and includes a sunken garden at its base.

“It is on an exceptional site facing the national museum,” said Wardé. “It is on the Damascus Road which links this port city to the rest of the Arab world.”