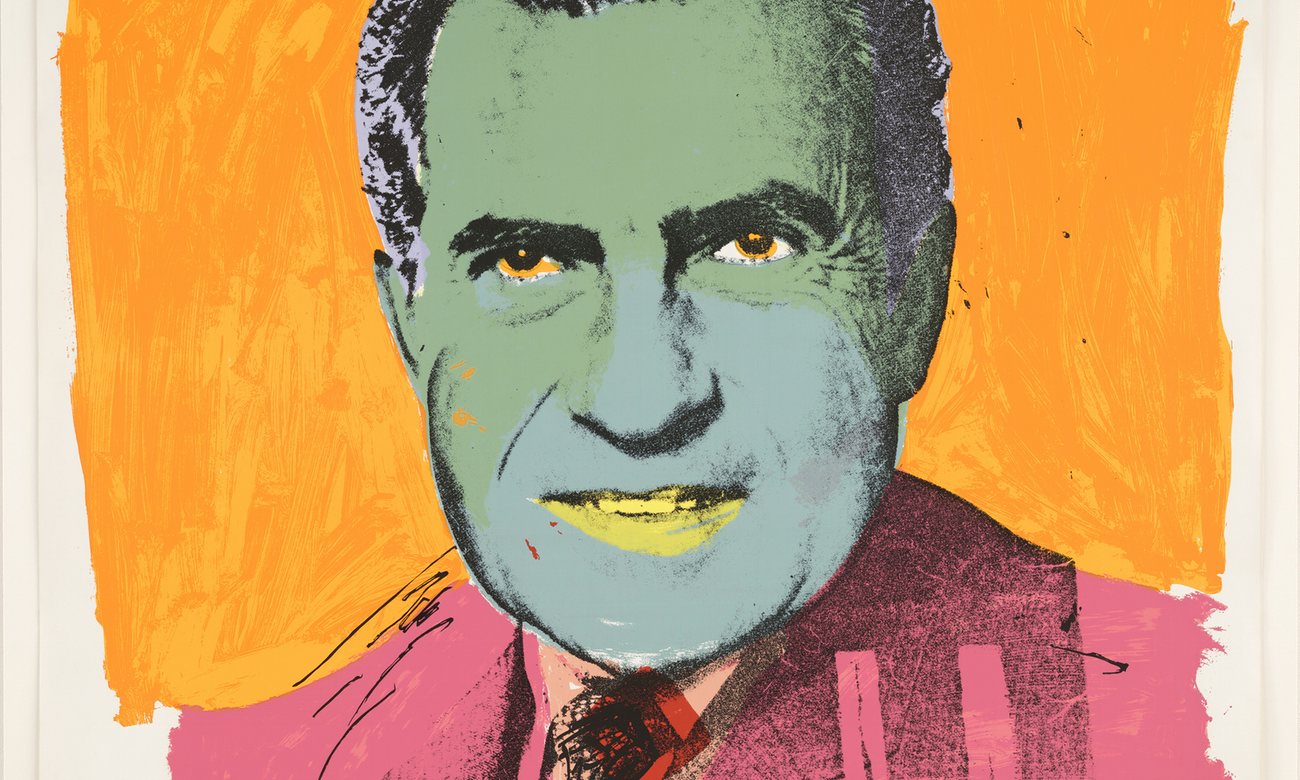 Andy Warhol’s Vote McGovern, 1972, will be part of American Dream at the British Museum. Photograph: Scala

This article titled “London exhibition puts US on show as postwar creative superpower” was written by Maev Kennedy, for theguardian.com on Wednesday 12th October 2016 15.03 UTC

On the eve of the most bitterly fought US presidential election in decades, the British Museum has unveiled a print created by Andy Warhol in 1972, a demonic Richard Nixon urging the viewer to vote for George McGovern – a spectacular and spectacularly unsuccessful campaign image that preceded a landslide victory for Nixon.

Warhol used a bland official photograph of Nixon and his wife Pat, taken from the cover of Newsweek, and doctored it to give him glaring yellow eyes, lipstick, and a eerie face the colour of his wife’s top. It will be be a star exhibit in the museum’s major spring exhibition of prints made in the US since the 1960s, including some gigantic recent acquisitions that have never been displayed because they are too big for any of the prints and drawings galleries.

Warhol believed the image, created to be sold as a fundraiser for the Democratic party, made him a marked man politically, with the tax authorities poring over every cent of his income tax returns for the rest of his life.

Stephen Coppel, joint curator of the exhibition, said Warhol’s subsequent lifelong battle with the revenue service was the true reason for the much-mocked revelation that he kept scrupulous daily notes in his diaries of every taxi fare and other expenses – “he knew his accounts would be crawled all over”.

Coppel’s department has for years been planning and acquiring works specially for an exhibition, The American Dream, which will open in March, knowing it would come close to a US presidential election – but with no idea how bitterly fought that contest would be.

Although many of the recent acquisitions and loans from major collections, including the Museum of Modern Art in New York touch on campaign issues including racism, feminism and immigration, Coppel said they would not be making any changes to reflect the outcome. “I think we will let the viewers draw their own conclusions,” he said.

After Vikings, Celts, and Egyptian underwater archaeology, the exhibition will be the first contemporary art show in the museum’s new Sainsbury exhibition gallery, and will include more than 200 works by 70 artists including some of the biggest names in American art, such as Jasper Johns, Louise Bourgeois, Edward Ruscha, Claes Oldenburg and and Robert Rauschenberg. Almost half the works have been acquired by the museum in the last eight years, which the director Hartwig Fischer described as “a fantastic achievement” given the stature of the artists and the soaring art market prices.

Related: As Aleppo burns in this age of lies, Picasso’s Guernica still screams the truth about war

Although some of the earliest pieces include Warhol’s images of Jackie Kennedy after the assassination of her husband, and the artist’s electric chair series, generally the works from the 60s have a more optimistic air. One of the largest will be Rauschenberg’s towering Sky Garden, more than 2 metres tall, an explosion of joyful colour from his Stoned Moon series when he was invited by Nasa to go to Cape Canaveral to witness the launch of the Apollo 11 mission. It includes an image of the footprint Buzz Aldrin later left on the surface of the moon.

Another, coming on loan from MoMA, is a 1966 vision of an immaculate filling station by Ruscha, the petrol pumps gleaming under a blue sky, the open road waiting.

The mood has darkened dramatically in many later pieces, including Willie Cole’s huge woodcut Stowage. Cole, who comes from an African-American family, was inspired by a famous 18th-century image he saw as a child in a schoolbook, of the human beings packed like barrels into the hold of a Liverpool slave ship, which was widely used by campaigners for the abolition of slavery.

Cole reinvented it to reflect the grinding drudgery of domestic service of his mother and grandmother, embedding a real ironing board into his printing blocks to represent the ship, surrounded by the soleplates of steam irons evoking African tribal masks.

Only 16 copies were printed, almost all now in museum collections in the US. Coppel recently managed to buy the 16th copy in New York for the collection, and it will go on display for the first time in the exhibition. “It was in astonishing mint condition,” he said fondly; “when we unrolled it, it still smelt of printing ink.”

The American Dream: Pop to the Present will be shown at the British Museum in London from 9 March to 18 June 2017