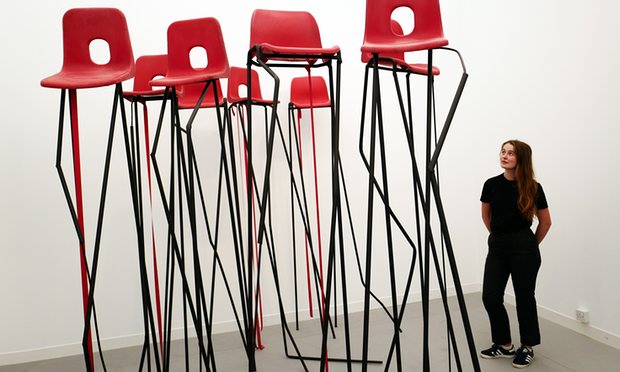 This article titled “Frieze art fair 2016 review: Everyone’s a performer in the boozy, fruity house of fun” was written by Adrian Searle, for The Guardian on Wednesday 5th October 2016 18.12 UTC

They are all at the 14th Frieze art fair – which opens in London on Thursday – among hundreds of other things, lovely paintings and silly sculptures (a stag covered in glass baubles, anyone?), not counting the people, some of whom are performers. Everyone is a performer at the fair. Even attempting to write about it is a performance.

A white-faced waiter in an empty restaurant proffers a small blackboard, with some sort of schematic face drawn on it. The paintings on the wall behind revolve, and there’s not a table to be had. My Heart Will Go On, reads the neon over the door at Frutta gallery, from Rome. Not your usual trattoria, then. The guy does his mime artist thing, lifting an eyebrow and twisting his mouth when I ask if he’s the dealer or the artist, and if there’s a table. The restaurant is a stand at the fair, and has nothing to sell except perhaps the set, or possibly the whey-faced goon with the board.

There are several quasi-real stage-sets here, with method-acting gallerists and collectors trying hard to be someone important, a worthy recipient of the things on show. Art fairs are always like this, the art reduced to the status of stage-prop. More usefully, artist Julie Verhoeven has taken the role of concierge in a suite of the fair’s toilets. Ask if she does assisted toilet-breaks, and her eyes light up as she bustles about, saying she loves a bit of debauchery.

But I don’t see much cottaging going on in the pink for a boy, blue for a girl lavatory décor, with its croched scatological toilet seats, the embroidered turds on her trolley (these are an acquired taste), and the tasselled fringe of bright white tampons down by the Harpic bottles, cleaning rags and Toilet Duck.

Verhoeven has turned the loos into an infantilist’s fun-house, making the usual business of closed-door deals and sobbing collectors more an entertainment than usual. I suppose you could call her project social sculpture. I call it a laugh.

A Gentil Carioca from Rio de Janeiro fills its stand with its own trolleys or work stations, by Brazilian collective Opavivara!. These too have social purpose. A wheelchair provides the base for amplifier, speakers and a karaoke machine, there’s a pram-cum-barbecue unit, and best of all a wet bar set up on a supermarket trolley, with all the booze and fruits. Mine’s a caipirinha, but there isn’t time, either for a drink or a song.

If you want respite, there is Dominique Gonzalez Foerster’s remade 1970s room. With its period brown walls, daybed and mirrors, it corresponds to a description of film-maker Rainer Werner Fassbinder’s own bedroom. The things this room might have seen, but hasn’t. But it is full of a kind of lassitude.

Gonzalez-Foerster’s R.W.F is an imaginary as well as a real space, a transposition of somewhere she has never seen. It has been built (at Esther Schipper’s stand) as part of a section called The Nineties. Several galleries are presenting works and installations from the period including early Maurizio Cattelan (a spoof Lucio Fontana painting, cut with Zorro’s mark) and a Carsten Holler infant’s cot, elevated on ridiculously high rods above a set of wooden wheels. One breath of wind and the kid would be flung to its doom.

Anthony Reynolds Gallery, in the same section, has a show of the candid, intimate photographs of Richard Billingham’s dismal family life in a Birmingham high-rise. They remain wonderful, awful images, and have more bite than much at the fair, or anywhere else come to that. Billingham has spent much of the past 20 years escaping the success these images had. Sometimes early success – and a great body of work – can pursue an artist down the decades in unforeseeable ways.

The best thing about the fair is to encounter works for the first time, or that one had only known by rumour or reputation. Seeing things for oneself matters, in an age where art often gets bought on the strength of an internet image.

Betty Tompkins has for years been painting the female body, oft in stark, in your face detail. Turn a corner at the P.P.O.W stand and there is her Ersatz Cunt Painting, a kind of pink glow. Next to it are a series of small canvases called Women’s Words, each emblazoned with often derogatory names given to women and parts of their bodies, from the affectionate Love to the Village Bicycle, from Bit of Crumpet to Dirty Old Slapper. They jostle over the wall, like a crowd of leering blokes.

Some art works need seeing only once, and sometimes even that is once too often. There are fewer novelty sculptures of people in abject and ludicrous contortions of human distress than previously. Gagosian shows potter Edmund de Waal, but no matter how good his books might be nothing convinces me about his precious little pots. Hauser & Wirth has a mad and outragiously crowded stand dedicated to the impossibility of recreating an artist’s studio. This is great fun, as you work your way through the stagey, cluttered salon finding the real and fake artworks of a fictitious artist, all made by the gallery’s own roster of artists – from Mark Wallinger to Phyllida Barlow, Leon Golub to Martin Creed.

And then, at the far end of the fair, I come across Jesse Darling’s March of the Valedictorians, a group of mutually-supporting chairs on bent-legged stilts, a kind of wavering community not sure of its place. Just like an artwork, just like a human crowd. It sticks in the head and stays there.

London’s Seventeen gallery has a snake eating its own tail as a seating arrangement, where you can sit and watch John Rafman’s virtual-reality video, in which, apparently, you begin in an art fair and drift into a horror movie. You don’t need VR for that, and in any case the art market is itself an Ouroboros.

Art fairs can give art its lame name. But work at it and things stick out. Some works, one feels, are only made to be hung on an art fair wall, the bearers not so much of ideas or a sensibility but of a fashionable name and the glamour of the gallery that tried it on and moved it along. Some things are destined for a museum, while others get resold in the parking lot or in a hotel bedroom, or back in Verhoeven’s loos, the unlucky and unlikely dupes of a moment’s enthusiasm or a passing whim.

Some things arrive on their stands cosseted in bubble-wrap, only to be embalmed again at the end of the fair, then unwrapped once more a few days, weeks and months later at another fair – in Paris in a week or two’s time, at Art Basel Miami, or, if they get lucky, at Frieze Masters a few years down the road, where they will be rediscovered as the works of a hitherto unacknowledged genius. By which time their price has quintupled and a critic like me will be cursing the blindness with which they reacted the first few times around.

These thoughts had me pressing the buzzer next to the ornate bronze elevator doors Ryan Gander has installed in a wall at Johnen Galerie. “Elevator to Culturefield,” reads the sign. But the doors don’t open and the lift is going nowhere. It is nothing but a dream of escape. There isn’t one.