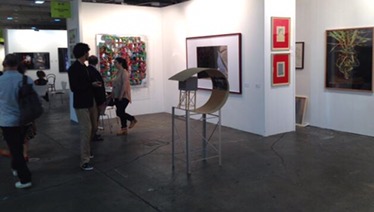 The opening of Crossroads art fair in the Truman Brewery provided a nice contrast to the gloomy stories issuing from Frieze www.ft.com

While foot traffic appeared light, dealers and gallerists at the Spanish-owned Modern and contemporary art fair spoke of strong early doors sales and strong attendance from museums and major collectors, many of whom came from Spanish speaking South America. London gallerist Kristen Hjellegjerde told us

“It’s been good for us so far. We sold three works by Soheila Sokhanvari to a new client, and have had interest from international museum curators that we haven’t encountered at other fairs.”

Galleries participating came from across the world, with strong Spanish, German and South American representation. Works on show at the fair included a number of works by Miro, Hans Hartung and others alongside newer artists such as Simon Mullan.

FAD will be keeping a close eye on the fair as it progresses.

10 exhibitions to visit during Frieze Week 2021

At last lots of great art to see IRL, we can’t wait for Frieze London next week but even better […]