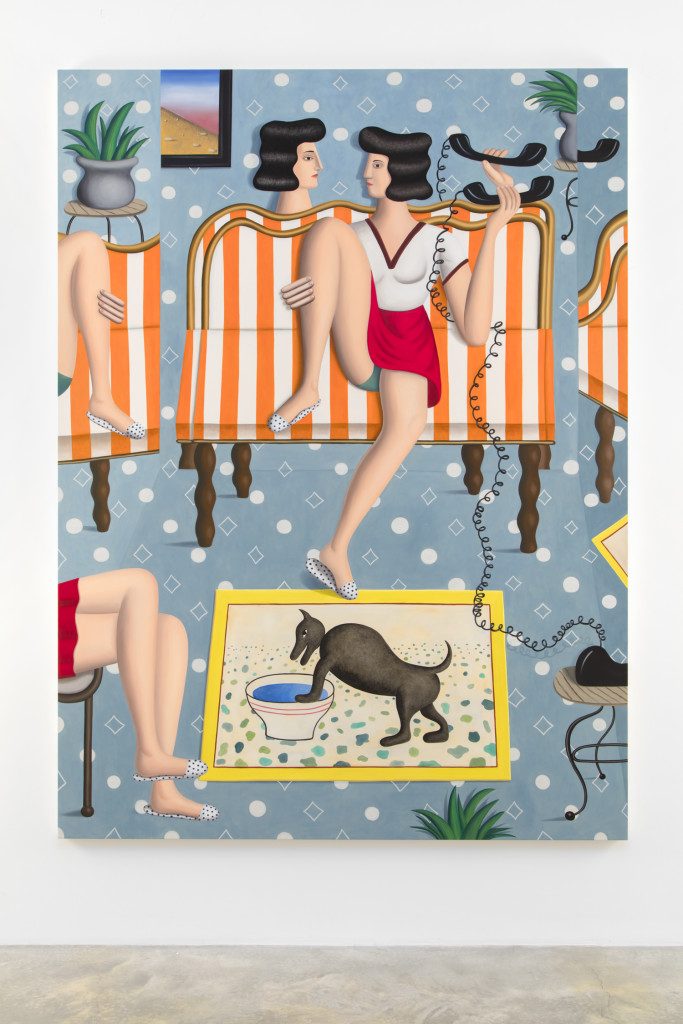 Casey Kaplan present the first New York solo exhibition by artist Jonathan Gardner. With a natural proclivity for figurative, still life, and landscape painting, the artist honed his idiosyncratic style at the Art Institute of Chicago, where he studied under Chicago-based artist Jim Nutt. Not unlike Nutt and the Chicago-Imagists of the late-1960s, who cultivated a distinctively surreal tone and took inspiration from all walks of life, Gardner’s compositions are guided by an internal meandering. Drawing from a cache of personal experiences and impressions left by art movements ranging from Neoclassical to Dada, Gardner’s mostly female portraits straddle both the hyperreal and fantasy. Traditionally painted with oil on linen, this premier exhibition at the gallery shows Gardner’s compositional strengths, balancing – in a nonhierarchical delineation – form and background as his elusive renderings are collapsed into a single plane. 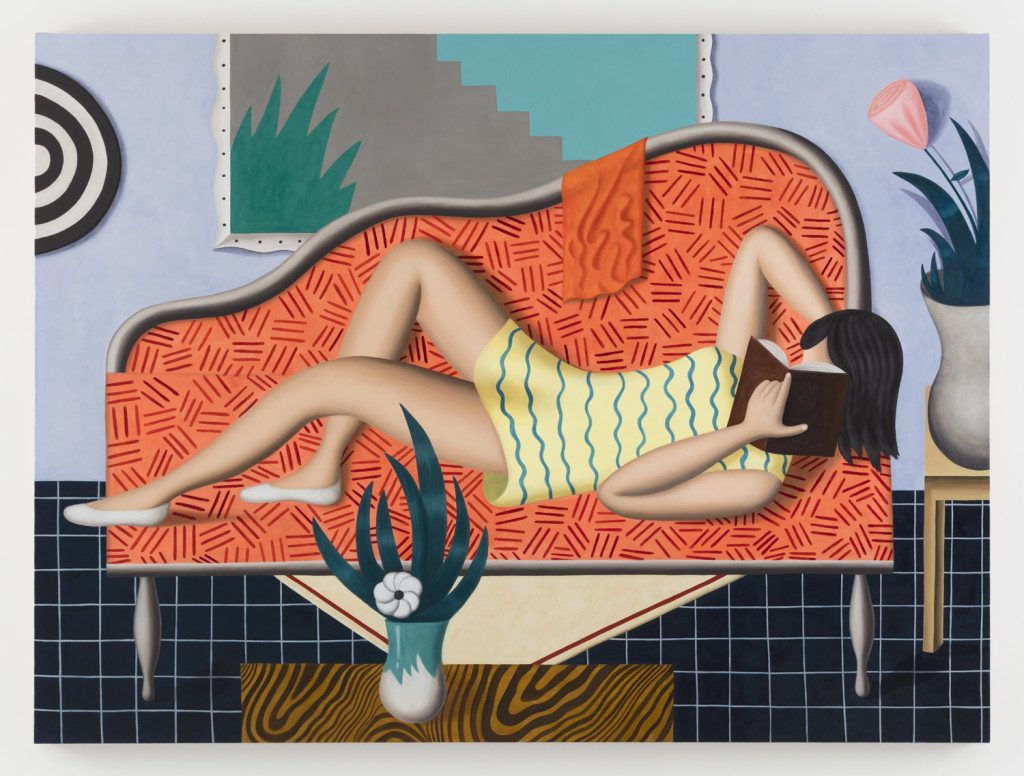 Established within a mise-en-scène of iconographical histories, the paintings introduce an ambiguous space that fluctuates between a reverence for art history archetypes and the memory of a lived experience. Anthropomorphic and inanimate forms exist beyond contextual or narrative associations. The initial suggestion of a storyline, ushered by the portrayal of leisurely pursuits, is thwarted by a reverie of crisscrossing allusions. Accounts ranging from the affable chatter on the opposite line of the telephone receiver to the image of relaxation in a women’s public bath are infiltrated with art historical tropes. In declining the use of a sitter or photograph for reference, Gardner frees himself from the confines of physical authenticity, favoring instead the outline of the shape of the female body in a highly distilled interpretation. 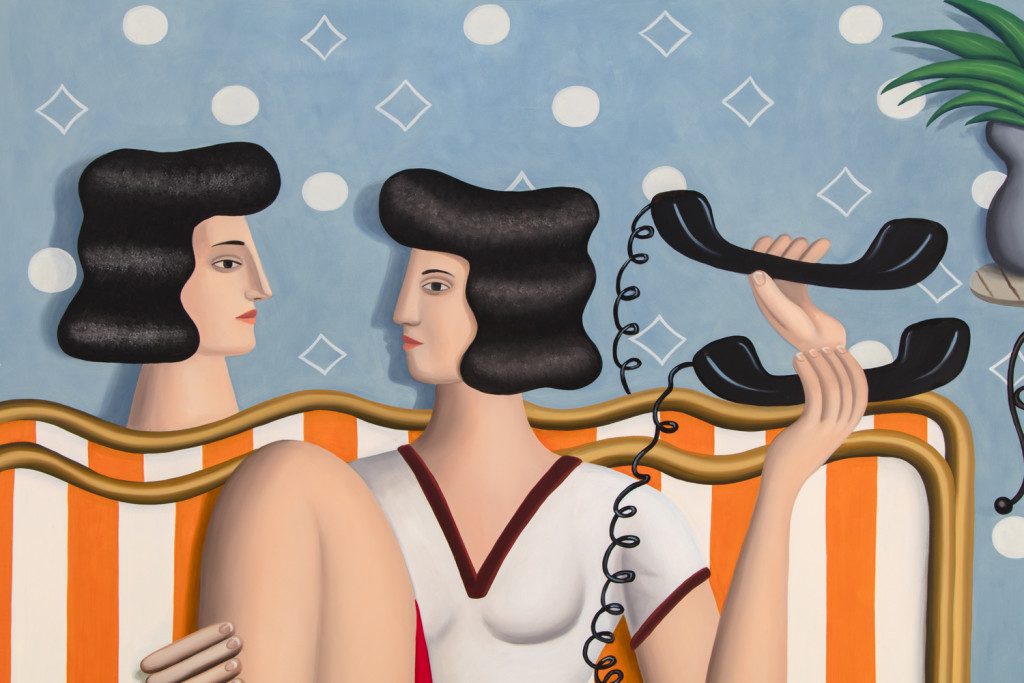 The potential for an idealized eroticism is impeded as Gardner levels all subjects with an analogous degree of deference in an extreme reduction of line and corporeal surfaces. Though the expressionless women seemingly relate more deeply to nearby inanimate counterparts, taking precedent in Fernand Léger’s 1949 seminal discussion of the plastic versus sentimental value of the human figure, a trace of consciousness lingers. The painting titled The Model (2016) presents an ironic setting for Gardner, as it is not one he would find himself in. This painting within a painting cleverly alludes to the time honored practice of painting from life and offers a diagonal disruption that gives way to other works in the exhibition such as Reclining Nude (2016) and Bather with Yellow Towel (2016). 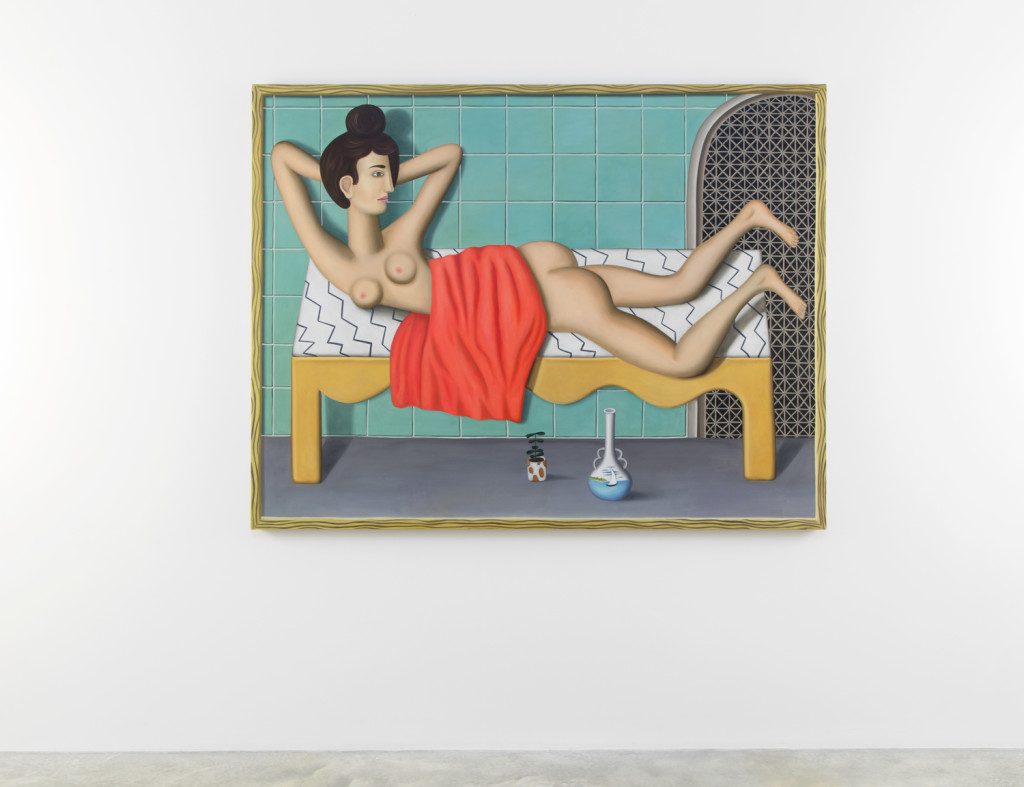 Silhouettes and motifs reemerge from one painting to the next, consistent in size as their backdrops shift in and out of frame. These reoccurring forms compel multiple interpretations of an individual subject, while indicating a nebulous passing of time. Upholding selected conventions of painting in medium and application, Gardner dismantles the rubrics of perspective and distance. Shadowing implies a false sense of depth and allows for compositional distortions ranging from the compression of multiple scenes to the overlapping of horizon lines. Figure, still life and surroundings are in one spatially flat field that is disrupted by illusory strategies comparable to that of trompe l’oeil. Yielding to shape, color and repetition, Gardner reduces multiple planes and angles to a tableau of overlain moments. 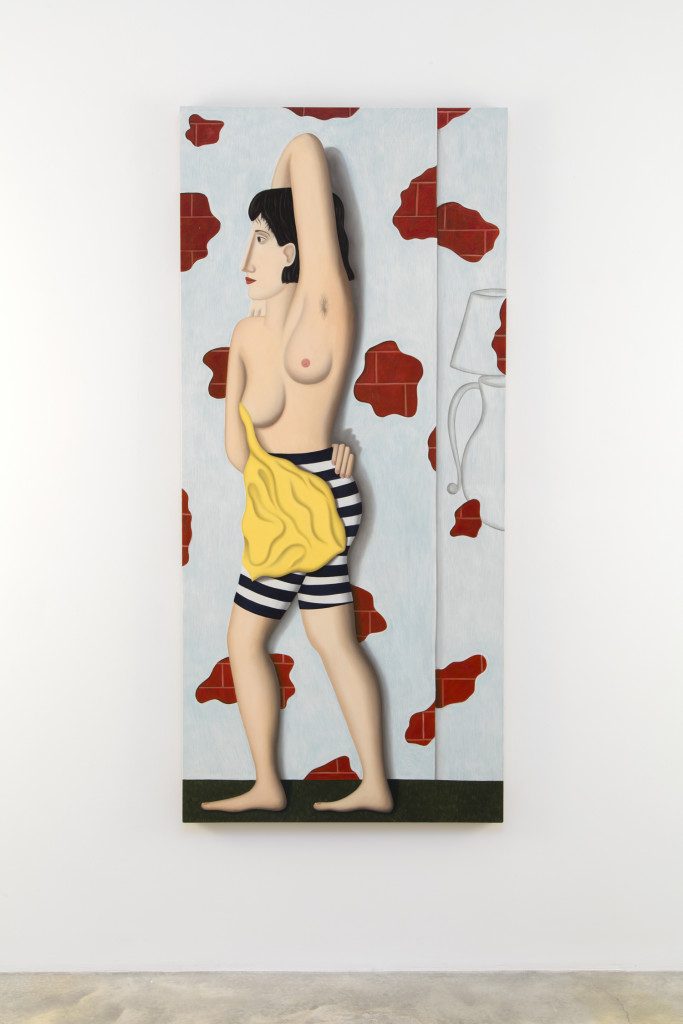 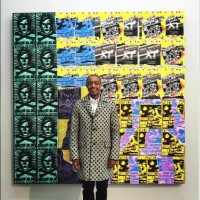