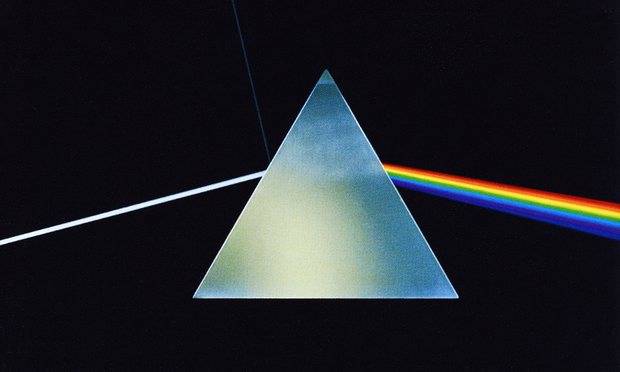 The album cover of The Dark Side of The Moon, released by Harvest Records in 1973, was an all-time classic. Photograph: Jeff Morgan/Alamy

This article titled “Pink Floyd’s psychedelic revolution will rock the V&A” was written by Dalya Alberge, for The Observer on Saturday 6th August 2016 23.04 UTC

The Victoria & Albert Museum’s David Bowie exhibition in 2013 became the fastest to sell out in the museum’s history. Now curators are planning a celebration of another musical institution, Pink Floyd – in collaboration with surviving members of the band.

Related: A reverential rave-in with the Pink Floyd: archive, 20 Jan 1969

One of the defining forces behind 1960s psychedelia, Pink Floyd became one of the most influential and successful groups of all time. The Rock and Roll Hall of Fame cites them “as the architects of two major music movements – psychedelic space-rock and blues-based progressive rock”. The band’s lyrics are described as offering “biting political, social and emotional commentary”.

Formed in 1965, Pink Floyd featured lead vocalist and guitarist Roger “Syd” Barrett, bassist Roger Waters, drummer Nick Mason and keyboard player Rick Wright. Guitarist David Gilmour joined shortly before Barrett’s departure in 1968. Barrett and Wright died in 2006 and 2008 respectively. The group sold more than 250 million albums, with The Dark Side of the Moon and The Wall acknowledged as classics.

The V&A’s tribute will emphasise the groundbreaking originality of the band’s live concerts. Pioneering psychedelic light shows, spectacular special effects and elaborate stage constructions included a model plane that flew over the audience before crashing into the stage. For the concert production of The Wall, animations were projected on to a wall of cardboard bricks built between the band and audience.

Their album covers are now considered among the most influential ever created. The museum will showcase original artwork by their designers and photographers.

Hipgnosis, the experimental design company co-founded by Aubrey Powell and Storm Thorgerson in 1968, created the rainbow-through-a-prism graphic for The Dark Side of the Moon, which became one of the most recognisable LP covers, playing a part in sales exceeding 40 million copies.

The exhibition will also pay tribute to the genius of Barrett, who taught himself guitar – mostly by playing along to records – and reached the heights of rock stardom, only to become a casualty of the late-1960s fascination with LSD. The Dark Side of the Moon is said to have been partly inspired by Barrett’s mental-health struggles.

Last month Royal Mail issued 10 stamps to celebrate the band’s worldwide influence, an honour previously granted to the Beatles. In 2014, the group released their final album, The Endless River. In an interview with Classic Rock magazine last year, Gilmour said that, after almost half a century together, there were no plans to reunite. He said that Pink Floyd had “run its course” and it would be “fakery” to reform with his two surviving bandmates.

Some of the ground work for the V&A show has already been done. In 2014, a Pink Floyd retrospective organised by one of Italy’s biggest music promoters was abandoned following a reported dispute over fees and intellectual property rights. A worldwide tour of hundreds of exhibits, including designs and recordings, had been planned. A giant inflatable pig, featured on the cover of Animals, and the stage sculpture of The Wall are among artefacts that are now likely to come to the V&A instead.

The museum will also include Pink Floyd in its major autumn exhibition: You Say You Want A Revolution? Records & Rebels 1966-70, which will explore the wide-reaching social and cultural changes that followed the austerity of the postwar years. London’s Carnaby Street will be portrayed as part of a “1960s streetscape”, along with the UFO nightclub on Tottenham Court Road, where Pink Floyd made their name.

The Revolution exhibition will also highlight figures such as Vidal Sassoon, who revolutionised hairdressing in the 1960s, creating geometric styles that came to define the decade. Stylists at a Sassoon Sunday Salon will offer haircuts to visitors.

1965 Formed by Syd Barrett, Nick Mason, Roger Waters and Richard Wright, later to be joined by David Gilmour in 1967.

1979 Double album The Wall is released, with single Another Brick in the Wall reaching number one for five weeks.

1985 Waters leaves, saying the band no longer exists without him. He goes to court to try to prevent his former bandmates from performing as Pink Floyd, but eventually loses his case.

2014 The band’s final album, The Endless River, is released, winning a Grammy.