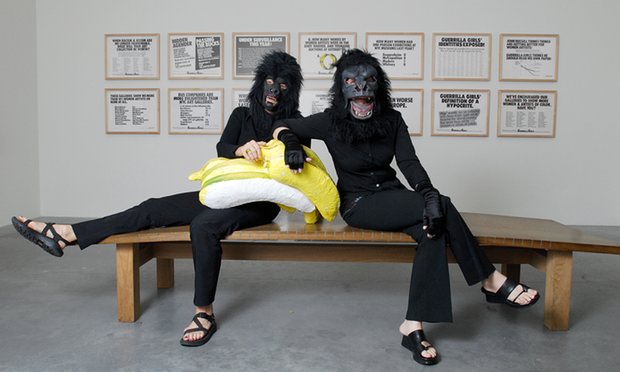 Two of the Guerrilla Girls pose at a Tate Modern exhibition in 2006. Members of the group wear gorilla masks in public to hide their identities. Photograph: Christian Sinibaldi for the Guardian

Three decades after they first began exposing inequality in the art world, a group of anonymous mask-wearing feminist activists called the Guerrilla Girls are to get their first dedicated UK show.

The group will this summer survey more than 400 European galleries to explore whether museums are reflecting the full diversity of art and art history.

It is a battle that still needs to be fought, said Iwona Blazwick, director of the Whitechapel Gallery in London, which is commissioning the Guerrilla Girls. “I was just at the Kunstmuseum in Basel where they have just rehung the entire collection from 1900 to the present and I think there are five women. Sadly it is still an issue.”

The Guerrilla Girls were founded in New York in 1985, each member taking the name of a dead woman artist as a pseudonym, for example Frida Kahlo and Georgia O’Keeffe. In public they hide their identities behind gorilla masks.

The artists, a shifting collective, have regularly named and shamed galleries that don’t show enough women artists and critics who don’t write enough about them. Posters have included, “Do women have to be naked to get into the Met Museum?” and, “It’s Even Worse in Europe”.

Related: The 10 most subversive women artists in history

Blazwick worked at Tate Modern when it opened in 2000 and included the Guerrilla Girls in the Tate Modern Handbook, marking the gallery’s opening, “to remind us that this was a fight still needing to be fought. Women have been systematically excluded, particularly from institutions and museums.”

The Guerrilla Girls are all individual working artists in their own right and keep their identities secret when part of the collective – although Blazwick admitted: “I have my suspicions.”

They use rigorous research and humour to expose alarming truths, including the art world’s slow pace of change. In a campaign last year, they found that galleries that once showed 10% women artists now show 20%.

The Guerrilla Girls are not represented by any gallery and have always kicked out against institutions, so there is obvious irony in museums such as the Getty and Tate having their artworks in their permanent collections.

The plans for the Whitechapel include a banner and a public presentation about their 31 years of activist art on 1 October. Research and production materials used by the group will also go on display.

They will also lead a week-long public project at Tate Modern from 3 to 9 October as part of Tate Exchange.

Their graphics were always “so fresh, so funny, so to the point.”

For the Whitechapel project the group will send questionnaires to more than 400 European museum directors asking about the representation of artists who are female, gender non-conforming or from Africa, Asia and South America.

In a statement they said: “With this project, we wanted to pose the question, ‘Are museums today presenting a diverse history of contemporary art or the history of money and power?’ Our research into this will be presented at Whitechapel Gallery this fall.”

Blazwick said: “It will be interesting and telling and I hope it is going to tell a very positive story, I think things have moved on. Museum personnel have changed, they are not monolithic institutions they are living establishments which change, mutate, and evolve as society evolves … I hope it is going to be a good story. We’ll see what the survey brings forward.”

The Guerrilla Girls show, titled Is It Even Worse in Europe? will run from 1 October to 5 March 2017 and be part of an autumn programme at the Whitechapel Gallery that will also include a solo show of work by the South African artist William Kentridge.