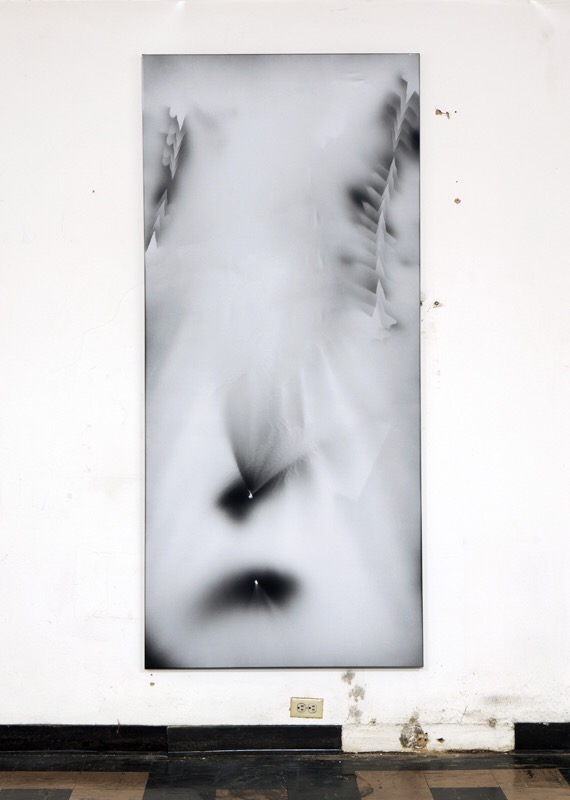 Zilm’s multimedia practice investigates the slippage between technological platforms and ways they are consumed and decoded in the social realm. His best known ‘film’ paintings take as their starting point the physical properties of film stock and cinema as a material medium. Like the Structural filmmakers of the 1960s, Zilm emphasizes the materiality of film and its apparatus.
For over a decade the artist has sourced 8mm, 16mm and 35mm black and white films for this ongoing project. Using a homemade bath, he chemically destabilizes the emulsion so that he can extract the filmic image and optical sound track from the reels of celluloid. The film, once fully extracted and finally in a liquid state, is then transcribed in its entirety onto a single canvas.
Each canvas is prepared with an undercoat of screen paint, the kind used by home movie enthusiasts, so that the support itself is literally a screen onto which the painting is materially ‘projected’; this material collapse of image, time, sound and narrative onto a fixed canvas-as-screen becomes a kind of ‘terminal projection’ of the film, a ‘petrified cinema’.

The exhibition SOME SCREEN MODS features a series of new film paintings (all 2016) derived from movies dating back to 1910 – from horror movies such as Night of the Living Dead and Nosferatu to Keystone era comedies such as A Hash House Fraud. Using zombie films as source allows the artist a kind of last laugh on an inside joke; this painting, quite literally zombie abstraction, becomes something very wholly and opposingly concrete.

The extreme aspect ratios of the canvases are also based on mid-century wide screen formats such as Cinerama and Todd-AO. Each painting consists of abstract/semi-abstract, spectral, monochromatic forms, simultaneously re-engaging early 20th Century black and white cinema and the tradition of the Modernist monochrome. Recalling X-Rays, Rayographs and other technical images, this new work triggers the latent tendency toward pareidolia, the psychological condition of finding figurative images in abstract forms. It also asserts one possible recalibration of painting toward an emerging way of seeing. Viewers, in an act of seeing that mimics current facial recognition software, begin to assemble a complex web of spectral figures and formal relations.

Zilm’s dynamic mark making often performs the setup and movement of the cinematic shot; close-up, pan, medium shot, tracking shot, reverse angle, zoom-out. The resulting marks and granular remnants further enforce this impression of the paintings being mysteriously active, of momentarily containing an-other, as they appear to glow, thrum and mutate. Space, complex, ambiguous and contradictory, is ‘holey’, rather than smooth or striated and Zilm’s ghostly forms and voids loom and dissolve in and out of focus. The atomized, airbrushed application of paint allows for a range of granularity that evokes the material condition of film.
Directly engaged with the ubiquitous presence of the screen in both private and public realms, the evolving role of painting and the technical image, Zilm’s paintings seek to express another kind of relation of the analogue to digital – of subject to object, data to facta. Knowingly drawing on these multiple histories, positions and relations, both materially and conceptually, Zilm seeks to pose some provocative questions regarding the evolving role of painting and the technical image in the society of control.

About the artist
Jeff Zilm was born in Iowa City in 1958 and lives and works in Dallas, TX. He graduated with a BFA from the University of North Texas and a MFA at the Southern Methodist University, Dallas. In 2008, Zilm undertook the Artist-In-Residency at The Chinati Foundation, Marfa, TX and in 2002 he was awarded the Otis and Velma Dozier Grant from Dallas Museum of Art. Selected solo exhibitions include AND NOW, Dallas, TX (2014); The Journal Gallery, Brooklyn, NY (2014); Preteen, Mexico City, MX (2012); and Oliver Francis Gallery, Dallas, TX (2012). Selected group exhibitions include Flash: Photography from Dallas Galleries, CADD Contemporary Art Dealers of Dallas, Dallas, TX (2009); Nexus Texas, Contemporary Arts Museum Houston, Houston, TX (2007) and 8 X Light, Jewish Museum, New York, NY (2001).
SOME SCREEN MODS is his first exhibition with Simon Lee gallery and first UK solo exhibition. A major solo museum exhibition, LOSSLESS FORMS FOR PICTURE PLANE, is on view at Dallas Contemporary until 20 March 2016.