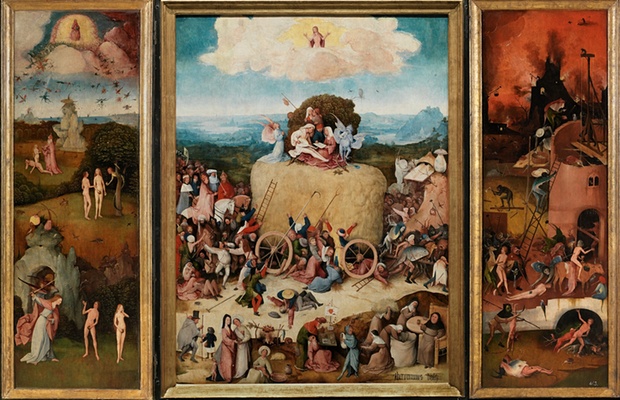 To hell in a handcart … The Haywain by Hieronymus Bosch. Photograph: Federico Pérez/Handout

This article titled “Hieronymus Bosch review – a heavenly host of delights on the road to hell” was written by Jonathan Jones, for The Guardian on Thursday 11th February 2016 09.00 UTC

At the turn of the 16th century, a Netherlandish painter who signed himself Hieronymus Bosch created one of the world’s most fascinating and confounding works of art. The Garden of Earthly Delights is a triptych, a three-part painting whose side panels can be closed like doors. Between Eden to the left and Hell to the right is Bosch’s vision of naked bliss. But what does it all mean?

I’ve stood in Madrid’s Prado museum, where this late medieval masterpiece hangs, purchased by Philip II of Spain so he had something to brood on besides pitching Armadas against Tudor Britain. I was as baffled as I was astonished. Yet now, in an exhibition that brings the visionary art of Bosch back home to the small Dutch city in which it was created, I think I see what he was getting at.

The Noordbrabants Museum in Den Bosch has put on one of the most important exhibitions of our century. This deeply absorbing and revisionist show is not just an astonishing organisational feat: little-known regional museum borrows almost all Bosch’s greatest works from galleries including the Accademia in Venice and the Metropolitan in New York. It is no exaggeration to say that in this exhibition, Hieronymus Bosch finally steps out from behind his surreal triptychs and speaks to us directly. You feel you are meeting him on the streets of Den Bosch – or ‘s-Hertogenbosch as he knew it – and getting the measure of the man.

There he is, a pair of spectacles balanced on his nose, his piercing eyes gazing out of a gaunt face. That is almost certainly the face Bosch presented to the world, in the corner of a painting of Saint John on Patmos he made for the Brotherhood of Our Lady, the city’s poshest religious fraternity, of which Bosch was a leading member. Clearly he was a respected local citizen whose fellow burghers thought his madly inventive art a great laugh, for he put this bespectacled face on a monster with lizard legs and a bird’s wings.

You can visit the chapel where this jokey self-portrait was once displayed, just down the road from the museum at St John’s Cathedral. In its gothic sanctuary, one thing is clear: Bosch was no heretic, not even an outsider like Vincent van Gogh, who would be born centuries later in this same region. Bosch belonged. This exhibition, rigorously based on the latest research, puts paid to the idea – popular in the 1960s, when he was hailed as a hippy prophet – that he belonged to a covert sect.

But it must have been a very tolerant place, old ‘s-Hertogenbosch, to take him to its heart. There is no avoiding the strangeness of his ideas. In his great painting The Haywain, lent by the Prado, a cart loaded with yellow hay and pulled by rodent-headed creatures is mobbed by people trying to join the lovers carousing on its summit, while others fight with fists and knives. This grotesque progress is headed straight for hell, where in the next panel of the triptych the damned suffer such fates as being hung from a pole and gutted, or hung to roast in the burning sky.

So that’s clear, right? If you sin, you go to hell. Yet there are infinite bizarreries at play in Bosch’s imagination. The left panel of The Haywain tells the story of the Fall, beneath a sky filled with monstrous buzzing creatures flowing out of heaven – the rebel angels, perhaps, descending to exile? On top of the haywain itself though, an angel and a blue trumpet-nosed demon fight over the souls of a pair of lovers. Perhaps love can get you into heaven as well as hell.

The public face of Bosch, walking the streets of this little city, was that of a good townsman and Catholic. His private thoughts emerge in the most unexpected and miraculous of all the treasures assembled – his drawings. Twenty survive in the entire world, according to the Bosch Research and Conservation Project, whose findings this exhibition reveals – and 19 of them are on view here. They show us the secret Bosch, a man with a mind full of monsters. One drawing is called The Wood Has Ears, The Field Has Eyes – a saying inscribed as on Goya’s Caprichos. Human ears hang from the trees. Human eyes stare out of the ground. It is like a Magritte. Only much scarier.

Bosch’s drawings reveal that within the respectable citizen with his big house on the market square festered a paranoid mind revolted by much of human behaviour. The darkness of these designs is tangible. Even a brilliantly accurate sketch of an owl’s nest has something hellish about it. A man hides himself inside a basket, with only his arse visible. Out of it he shits live birds, which playful children chase about. When they catch one, they pin it down with unbarbed cruelty: they are no innocents. In another drawing an audience gathers, their faces cold and mean. Perhaps they are watching Christ’s sufferings as in Bosch’s painting Ecce Homo, where a similarly callous crowd contemplates the tortured messiah’s bloodied body.

But Bosch is full of the compassion they lack. In a stunning painting of the day after the Flood, he focuses not on Noah’s survival but the sad bodies of the drowned, lying in terrible heaps and awkward poses, soon to be food for the animals emerging from the Ark. The deep melancholia of this medieval artist’s vision burns into your soul. Our earthly life is but a parade of folly and sin. Hell is waiting for those who do not take care for their eternal souls.

Related: Shock horror: why art’s so obsessed with the grotesque

Yet perhaps there is a glimmer of hope, a chance of paradise. The Garden of Earthly Delights is represented here by early 16th-century copies – the original is just about the only Bosch masterpiece that has not been lent. But I found myself coming back repeatedly to an anonymous artist’s version, puzzling over Bosch’s freakiest dream of all. Then finally, at the end of the exhibition, is a work that opens the door to paradise.

The Last Judgment is a manic revelation of mayhem. Almost everyone is going to hell. And yet the blessed are being ferried to a place where they can play in a colossal fountain while they wait to be carried up to heaven. Nudity is not sinful – it is the clothing of the blessed. The Garden of Earthly Delights is a paradise that foretells the joys of heaven. Bosch holds out hope like a giant flower, naked as innocence.