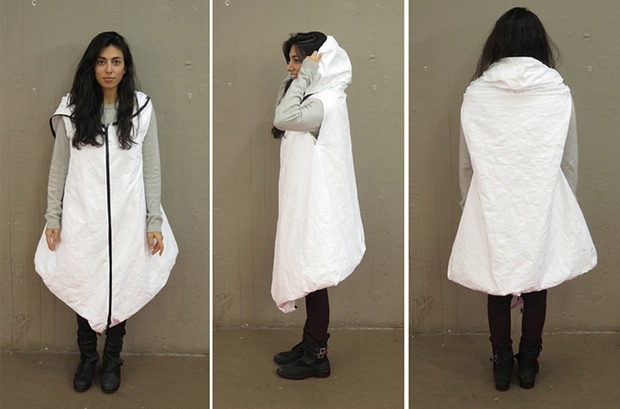 If the tent fits … the Royal College of Art ‘wearable dwelling’, worn by a student. Photograph: Anne Sophie Geay

This article titled “The ‘wearable dwelling’ – a coat for refugees that turns into a tent” was written by Emma Hartley, for theguardian.com on Thursday 21st January 2016 16.09 UTC

Art students have designed a coat for refugees that can be reconfigured into a tent or a sleeping bag big enough to hold an adult and a child. The garment, which resembles a three-quarter length puffa jacket with a hood when worn, gives fresh meaning to the term “wearable technology”.

The brief was first suggested to the Royal College of Art in London by the clothing company Wall, and is the work of 10 master’s students between the ages of 22 and 26, who intend to crowdfund production costs and begin distributing the finished product by June.

The “wearable dwelling” is made from Tyvek, which is durable but extremely light and soft, permeable to air and water vapour and also rain-repellent. It is insulated with Mylar, a polyester film material also known as “space blanket” that is commonly used by marathon runners for protection. The garment has plenty of pockets for personal items.

“Lack of adequate, watertight shelter and warm, waterproof clothing is a major issue in refugee camps across Europe,” said Ruben van den Bossche, one of the students, who believes designers have their part to play in finding solutions to the problems faced by refugees in Europe’s biggest humanitarian crisis since the second world war. More than a million refugees arrived in Europe in 2015 – a four-fold increase on the previous year.

“When people are forced to flee their homes due to conflict or persecution, they often leave with only the clothes on their backs and undertake what can be very long journeys in very difficult conditions,” said a spokesperson for the United Nations high commissioner for refugees.

“[We are] always looking at how design and technology can be used to improve our emergency response. With the proper testing, the RCA’s concept could be an innovative way to address the need for shelter for people who have lost everything.”

Related: ‘Kids could die in the cold’: the race to rehouse Calais refugees

But Nick Harvey, of the voluntary health organisation Doctors of the World, expressed some doubts. “This garment, while being better than nothing, does not appear suitable for the harsh weather conditions many refugees face. It’s certainly not an adequate shelter for an adult and child,” Harvey said.

“It’s great that they’re trying to help. But it’s not going to be particularly effective if the temperature is minus 10 and you’re trudging through the Balkans. It looks more suitable for festival-going or possibly even for the UK homeless.”

The marketing plan for the coat is expected to include an option for festival-goers of “buy-one-for-yourself, give-one-to-a-refugee”, while its armless design is intended to prevent the garment being uncomfortable to wear in summer.

“I know that this could seem naive and fluffy,” said Harriet Harriss, senior tutor at the RCA. “But it was born out of a sense of powerlessness to help the people pouring out of Syria. As designers, we are doing what we can with what we have.”