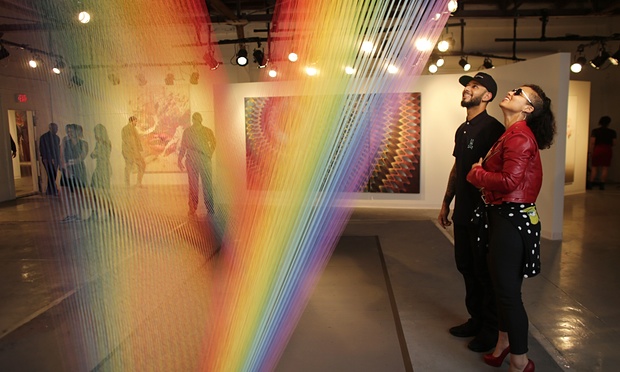 This article titled “Art market in ‘mania phase’ and risks bursting of the bubble, report says” was written by Edward Helmore in New York, for theguardian.com on Sunday 17th January 2016 17.04 UTC

After examining more than a million auction records from over 36 years, economics professors at the University of Luxembourg have concluded that the international art market is overheating, creating the potential for a “severe correction” in the postwar and contemporary and American segments.

Related: Are the most expensive paintings ever worth their prices? A definitive ranking

The report, released this month, uses a unique methodology to detect “explosive behaviours” in the market. The author says conditions are remarkably similar to the bubble of 1990 and the market is still inflating, in what they term the “mania phase of its formation”.

While this may not come as surprise to advisers and active traders in the market, the analysis gives weight to predictions that problems in the global economy will ricochet into the art market, as has already happened in other luxury sectors.

Art market watchers could hardly disagree that certain sectors have reached bubble territory. Some parts of the market that have been subject to intense financial speculation – for example, the so-called “zombie formalism” painters, such as Jacob Kassay, Lucien Smith and Parker Ito, have already deflated dramatically.

“A certain part of the art market, especially postwar and contemporary, is in bubble territory,” said Anders Petterson, managing director of the research and analysis company ArtTactic. “The really difficult question is to predict when the bubble might burst. I guess if you wait long enough, you will eventually be proved right.”

Like many, Petterson is watching the gathering global storm.

“The question is whether this uncertainty could spill over to the art market this year,” he said.

Bubble talk is like whispering in wartime: the more you talk, the greater the likelihood of trouble to come. The authors of the Luxembourg report say a market bubble is generally defined as a dramatic escalation in the volume of trading in assets at prices that exceed their fundamental value, followed by a sudden collapse.

Their report notes that following the 2008-09 financial crisis, few market sectors rebounded as robustly as art – particularly contemporary art, which has doubled in value since the beginning of the financial recovery.

But since art has no fundamental value, it is difficult for economists to apply economic principles to it. It is harder still to trade in art as an asset class, as the market has clearly attempted to do.

The artist and critic Walter Robinson, who coined the term “zombie formalism” for art that was essentially shiny and lacking in representational or narrative content and could therefore be traded as a liquid asset class, like gold, said: “Since the entire market is entirely irrational, it can’t be rationally interpreted.”

Other market advisers believe the bubble question is no longer relevant.

“Raising the bubble question is like talking about credit default swaps in 2009,” said Todd Levin at the Levin Art Group. “If you don’t know we’ve been in a bubble in certain strata of the market for a prolonged period, then you’ve been missing something. The professors can give themselves a big pat on the back.”

The problems facing the art market, Levin said, are precisely focused. Auction houses are facing a shortage of truly important masterpiece art to bring to market and sellers are demanding often uneconomic guarantees for consigning it.

Record sales, including Christie’s auction of Picasso’s 1955 painting Les Femmes d’Alger (Version ‘O’) for $179.4m, a high for any artwork at auction, or Modigliani’s 1917-18 Nu couché for $170.4m, only give an illusion of a healthy market. Many areas show signs of slowing growth or even contraction. The pressure is forcing the salesrooms to diversify into luxury goods markets.

Last week, Sotheby’s made an $85m deal to bring a private advisory company, Art Agency, Partners, under its umbrella in an attempt to grow private sales and expand its client base.

Related: How 2015 may have marked the end of the art market’s boom years

Levin said the bubble was inflating in part due to the prevalence of high-end money laundering being done through art, and how the two have come to affect one another. Buy art in one country and pop it in the private jet, the theory goes, and by morning you’ve moved $100m between tax jurisdictions.

“In certain countries, art is very effective way for collectors to transfer wealth,” Levin said. “It’s highly mobile and there’s a tendency for it trade up to whatever the strongest currency may be.

“Problems in the market tend to occur when we forget why art is created in the first place. When money gets turned into art that is one thing, but when art gets translated into money, it’s a problematic transaction. That’s what we’re looking at and it’s when you’re likely to run into trouble.”

Dealer Kenny Schachter, who writes for artnet.com documenting the art world’s development into a celebrity-focused luxury market for the mega-wealthy, predicted that sales to May would be “terrible”, but would then pick up as more good work comes to market at more reasonable prices.

“Art has become an international global lifestyle,” he said. “At Art Basel Miami, there were 10 celebrity one-person shows, none of which were anything to speak of. Art has grown beyond art itself and everyone wants to be part of it.”