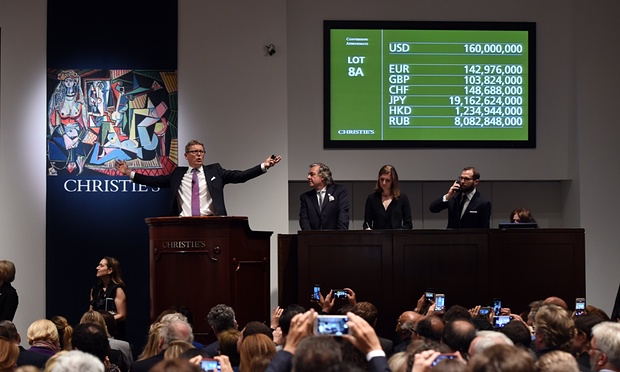 This article titled “How 2015 may have marked the end of the art market’s boom years” was written by Charlotte Burns in New York, for theguardian.com on Tuesday 29th December 2015 20.01 UTC

There are signs that the art market reached terminal velocity in 2015, and is now starting to slow down. This was a year of new records as billionaires battled for trophy works of art, spending enormous sums of money in the process. In May, Pablo Picasso’s Women of Algiers (Version O) (1955) sold for $179m at Christie’s New York to become the most expensive work sold at auction. In November, the Chinese collector Liu Yiqian bought Amedeo Modigliani’s Nu Couché (1917-18) for $170.4m, making it the second most expensive work sold at auction. More than $2.3bn was spent on art in just nine days of auctions in New York last month.

Related: Are the most expensive paintings ever worth their prices? A definitive ranking

It is worth noting that the art market is really a set of loosely related mini-markets, all of which behave very differently. But for the first time in years we are seeing a similar trend across each of these distinct markets: a slowdown. The once-blockbuster Russian art sales tanked this month as four London auction houses totalled just £17.2m ($25.9m) between them – the lowest tally in records dating back to 2007, according to Bloomberg. Also this month, the lackluster results of the London Old Master auctions suggested a market in continued decline.

In November, most of the contemporary, impressionist and modern auctions in New York failed to hit their low estimates, a sign that these markets have been pushed far enough. Buyers showed increasing discernment, balking at the obvious instances of auction house greed and snubbing works that were simply not good enough for their price tags.

“It feels like we hit the top in the first half of 2015,” said Todd Levin, director of art advisory the Levin Art Group. “We rang that bell and things have softened ever so slightly since. My guess is that we will see further tightening over 2016.”

Another indicator was the speedy retreat of new buyers from certain markets. This was the year that speculative frenzy for a breed of quasi-minimalist abstract art that has been coined zombie formalism by the critic Walter Robinson ended. Prices for works by young artists such as Christian Rosa, Parker Ito and Lucien Smith – which were astronomical in 2014 – fell back down to earth by the end of 2015. “It’s healthy – speculation on young artists has calmed down, and works that are bullishly priced aren’t selling,” said art adviser Lisa Schiff.

This was also the year in which we saw some of the most heavily orchestrated auctions in history, thanks to the excessive use of financial sweeteners by auction houses. The increasing competition between Christie’s, Sotheby’s and Phillips saw guarantees come roaring back: a financial arrangement in which the auction house promises the seller that it will cover a minimum price. These deals are either underwritten in-house or by anonymous third parties.

Sotheby’s laid out the biggest guarantee in history – $515m for the estate of its former owner Alfred Taubman. Phillips guaranteed almost half the works in its evening auction on 8 November while Christie’s made extensive use of the tool throughout the year – and also invented a new, complex financing system of “third party partners”, where works are backed by outside investors though the arrangements are not necessarily made public.

There is unlikely to be further escalation, simply because these strategies have eroded too much of the companies’ profit margins: mere days after announcing its best ever sales season in November, Sotheby’s launched a cost-cutting scheme offering voluntary redundancy to staff.

Auctions represent just one area of activity, but some of the froth had disappeared from the art jamboree of satellite fairs surrounding the 14th edition of Art Basel Miami Beach, where some galleries reported slower sales than in years previous. Art fairs have mushroomed over the past decade and collectors are starting to show signs of fair fatigue. “Fairs often place an artificial urgency on collectors to make impulse buys – which is not good for the artists or collectors. We’ve ended up with things that we’ve regretted buying because we only had an hour or two to decide,” said LA-based collector Mihail Lari, who opted out of Miami this year.

Across the board, “the market is more selective today”, said dealer Christophe Van de Weghe. “People are more conscious of price, quality and what kind of art they want to buy than they were a couple of years ago. They’re doing more homework.”

Some of this is down to shifts in the global economy. For example, Brazil was booming for the first decade of the new century and it didn’t take the art world long to woo it. But Art Review’s 2012 “it country” is now in recession, its debt rating has been downgraded to junk status by ratings agency Standard & Poor and its government is mired in corruption scandals. Brazilian buyers, hit hard by inflation, are no longer the force they once were. Similarly, newly minted Russians were active in the boom years leading up to 2008 but have now largely disappeared.

The continued contraction of the Asian economy is cause for concern. Nonetheless, Asian buyers were responsible for some of the biggest purchases of the year such as Van Gogh’s L’Allée Des Alyscamps (1888) for $66.3m at Sotheby’s New York in May. But while collectors from the region, such as the former cabbie Liu Yiqian, continue to show fierce appetite for trophy works, they’re beginning to show signs of shifting tastes, shunning works in the November auctions by artists such as Monet, which might previously have been snapped up.

These shifts are less indication of recession than maturation, said collector Alia Al-Senussi, who is also the chair of Tate Young Patrons. “Whether this is interpreted as a cooling is relative. Some overpriced and overhyped work will not sell, while high quality will always find a home,” she said.

Many welcome the gear change. “From our perspective, it seems that much of the market is settling into a responsible, comfortable pace,” said Adam Sheffer, a partner at Cheim & Read gallery and the recently appointed president of the Art Dealers Association of America (ADAA).

“People have cooled off but there are still a lot of buyers,” Van de Weghe says. “In 2016, if you have good works priced correctly, you’ll still do a lot of business.”