This article titled “Empty Spanish church transformed into ‘Sistine chapel’ of skateboarding” was written by Ashifa Kassam in Madrid, for theguardian.com on Thursday 17th December 2015 08.24 UTC

From the outside, there is little that distinguishes this 100-year-old church in the northern Spanish town of Llanera from any other.

But step inside the Romanesque revival structure and you’ll find a space transformed: where there were pews there is now a half pipe; prayers have given way to ollies and peeling paint has been replaced with a riot of colour.

For the past five years a local association dedicated to skateboarding has been working to convert this abandoned church into a skatepark.

“It was pretty much in ruins when we started the project,” said Ernesto Fernández Rey. “The walls were stained, paint was peeling and there was dust everywhere.”

Built in 1912, the church of Santa Barbara was once a focal point for the workers at a nearby munitions factory. But when the factory shut its doors at the end of the Spanish civil war, the church fell into disuse.

The space had been abandoned for decades when Fernández Rey came across it. Initially interested in using the space to open a business, the country’s economic crisis forced him to switch gears. He decided instead to use it to feed his love of skateboarding. “It’s got really interesting architecture, with high ceilings and lots of light,” said the 36-year-old.

The prospect of a one-of-a-kind indoor skatepark was a hit, particularly given that the area receives 200 days of rain a year. Calling themselves the Church Brigade, Fernández Rey and his friends formed an association to collect money and build a ramp. As their funds grew, they poured the proceeds into expanding the skatepark.

Word soon began to spread about the project. After the Madrid street artist Okuda San Miguel stumbled across a photo online showing the group skateboarding in the church, he approached them to ask if he could paint murals in the space. “I fell in love right away,” the artist said in a video interview about the project.

San Miguel took care of raising funds for the project, setting up a crowdfunding space and recruiting corporate sponsors. “It’s like my personal Sistine chapel,” he said.

The finished murals, which cover the church’s vaulted ceilings and walls with a kaleidoscope of colourful geometric patterns, were revealed this month.

Fernández Rey said the skateboarders were still getting used to the dramatic makeover. “It’s a big surprise. But it is a really beautiful place to spend some time.” 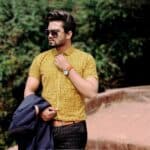