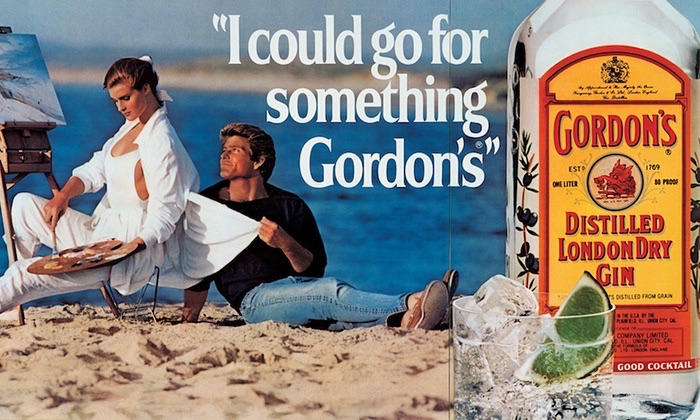 Something Gordon’s by Jeff Koons, who has been accused of copying a Gordon’s Gin advert. Photograph: Jeff Koons

Jeff Koons has been accused of plagiarism. Again.

Photographer Mitchel Gray has filed a complaint in a New York court that Koons copied, “nearly unchanged and in its entirety”, an advertising photograph he took in the 1980s for Gordon’s Gin. Gray said he only recently noticed what he alleges is the uncredited and unauthorised use of his original work in Koons’ 1986 work I Could Go for Something Gordon’s. (Koons has not provided a comment.)

This is just the latest in a march of multimillion lawsuits against Koons by photographers who claim he stole their work in the 80s. The ad designer Franck Davidovici launched legal action in France at the start of this year over Koons’ 1988 work Fait d’Hiver – a sculpture of Ilona Staller, a penguin and a pig. According to Davidovici, it is blatantly derived from an advert he created for the fashion company Naf Naf that also featured a model and a pig.

Yet Davidovici and Gray are latecomers to the game of suing Koons. They are way behind Art Rogers, who successfully sued Mr Koons in 1992 for plagiarising a shot he’d taken of a couple holding cute puppies. Koons claimed that he had “parodied” Gray’s photograph in his polychrome wood sculpture String of Puppies.

Koons lost – which may set a precedent that helps his new accusers.

Since then, he has become richer his art more expensive – and the claims against him are blossoming like fake flowers.

People tend to be polarised about accusations levelled at Koons. If you like him, you can argue that “appropriation” is a recognised strategy of contemporary art and was at its height when he created these contentious works. If you loathe him – as many serious art lovers do – you can say it all goes to show he is a talentless cheat who steals ideas then pays craftsmen to execute them: the artist as snake-oil salesman, a great American confidence man.

I like Koons, and writing about the works he has been sued over makes me laugh. Pigs appear in more than one piece by him: they are symbols of what he calls banality. All the works by other artists he has been accused of stealing can be seen as savage satires on the kitsch emptiness of modern culture. I believe his “parody” defence has some truth to it.

But I am genuinely shocked by the latest claims. The real defence of Koons, and other artists who “appropriate”, is of freedom of imagination. Koons seems to have an imaginative vision of modern life as a banal funfair of kitsch images and desires. It’s a powerful picture of our time.

Or is it? If his pigs are pinched, where does his original vision lie? Are any of his images original, or will they all one day be attributed to a legion of photographers and ad creatives?

The mystery of Jeff Koons deepens. In his novel The Map and the Territory, the trenchant Michel Houellebecq imagines an artist trying to portray Koons. He can’t get him right – this bizarre character is too plastic and impenetrable. A delight to speak to, Koons is as elusive as an accomplished politician. Perhaps he is just a manic salesman with nothing to sell. And yet, a world in which Donald Trump is pitching for the US presidency is surely one in which banality and kitsch really are as potent as Koons portrays them.