Shia LaBeouf: 'Why do I do performance art? Why does a goat jump?' - FAD Magazine
Skip to content 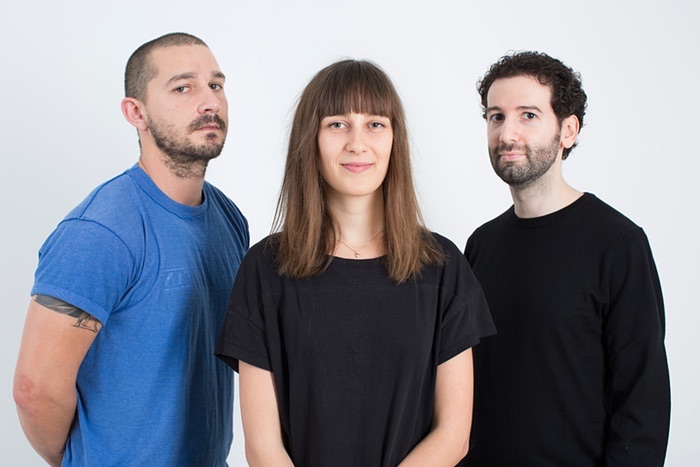 ‘I’m not comparing us to the Beatles’ … from left, LaBeouf, Nastja Säde Rönkkö and Luke Turner. Photograph: Graeme Robertson for The Guardian

This article titled “Shia LaBeouf: ‘Why do I do performance art? Why does a goat jump?'” was written by Alex Needham, for The Guardian on Thursday 10th December 2015 07.00 UTC

It’s a Friday night and Shia LaBeouf, Luke Turner and Nastja Säde Rönkkö are sitting in a room behind the bar of the plush Soho Grand hotel in New York, enjoying the afterglow of their latest project, #ALLMYMOVIES. LaBeouf’s a world-famous Hollywood actor turned performance artist, the former star of the Transformers franchise. Turner and Rönkkö are plain old artists, based in London and Helsinki respectively.

LaBeouf, handsome, scruffy and slightly belligerent, is wearing a white sweatshirt and vapes intently. He’s got the three dots you see on an iPhone when someone is texting you tattooed on his hand. “To use technology to connect with people is fucking magical,” he says. “You know when you’re texting somebody and those three dots pop up? There’s so much magic happening in your anticipation, in your waiting for that response, and if the three dots go away you feel like, ‘Argh!’”

Turner and Rönkkö, it’s safe to say, don’t quite have the same growly charisma as LaBeouf. Indeed, they look as if they’ve won a competition to hang out with him. But the unlikely trio are adamant that they are an artistic collective, each on an equal footing. Turner wags a metaphorical finger at journalists who have failed to understand this. “If it’s a positive article, it’s a work by the art collective,” he says. “If it’s negative, it’s by ‘actor Shia LaBeouf’.” He frowns. “It’s very peculiar to write about a work without saying who it’s by.”

But aren’t they like a band, where people are only interested in the singer? “Well,” says Turner, “you don’t say, ‘John Lennon has released his album.’ It’s the Beatles. I’m not comparing us to the Beatles, by the way.”

Since the beginning of 2014 – when LaBeouf heralded his new career by attending the premiere of Nymphomaniac with a paper bag over his head, scrawled with the words “I am not famous any more” – the three have dreamed up projects (some call them stunts, a term they hate) that have involved LaBeouf interacting directly with the public.

For the first, #IAMSORRY, he sat with a bag over his head in an LA gallery while art-lovers, fans and curious passers-by came in to spend time with him one to one. The project became notorious when LaBeouf said a woman had sexually assaulted him in the course of it. Then there was #METAMARATHON, which saw him running 144 laps of the Stedelijk Museum in Amsterdam in purple Spandex, holding a baton with anyone who wanted to run alongside him.

In #ALLMYMOVIES, the latest project, LaBeouf watches all his films in reverse order – from Man Down to Breakfast With Einstein via Indiana Jones – at a cinema in New York for three days and nights, surrounded by members of the public, a camera trained on his face throughout. The starting point, says LaBeouf, was “some interview with Johnny Depp on how he never watches his own films and it just felt like false modesty”. As the 60-hour marathon unfolded, it launched a thousand memes. “It’s a big part of why we do this,” says LaBeouf. “Other people get to be creative with us.” Hence all the hashtags.

Such self-mockery may explain why #ALLMYMOVIES was so warmly received, particularly by those who queued for up to 17 hours to share a moment – and perhaps some popcorn – with LaBeouf. “It was really nice to be sitting watching Indiana Jones and feeling all this shame about the movie, and to have somebody come up and nudge me on the shoulder and say, ‘It wasn’t your fault.’ You leave the theatre and strangers feel like family. I was walking down the street today and someone offered me a bagel. Films don’t do that for you. Films separate you.”

Does he think people respected the fact that he’d had the nerve to look at all his films – and his life – in the face? “If you think I’m doing this stuff for respect,” he says, “it’s the strangest strategy ever developed. No, I’m doing this to connect.”

Liverpool will be the next city to get the chance to connect with the trio. In #TOUCHMYSOUL, they will be stationed in Fact Gallery, taking calls from the public. People will also be able to go along and watch. Perhaps mindful of the fact that rather more people will be interested in calling LaBeouf than the other two, the conversations will be four-way and, like many of their projects, livestreamed.

It’s the first time Rönkkö and Turner have also fronted a project. Previously, LaBeouf has been alone in the hot seat. “I always tell them: what if someone’s going to set my hair on fire, what if someone comes in with a mallet and hits me in the face?” says LaBeouf, though he does add: “The more we do this, the less fear I have about the public.”

Critics have largely dismissed their projects, putting them in the same bracket as, say, David Blaine living in a Perspex box for 44 days. MoMA curator Klaus Biesenbach all but called #IAMSORRY a rip-off of Marina Abromovic’s The Artist Is Present, in which she locked gazes with members of the public across a table at MoMA. It’s a criticism that makes the trio particularly irate. “It was people sitting facing each other, but there were so many differences it was completely a different piece,” says Rönkkö.

The trio insist that their work is not aimed at the art world in any case, although Turner does say: “I mean, it’s nice if everyone embraces it. But people who aren’t writers write these amazing 2,000-word articles about their experience on Tumblr, which are just as articulate as the best art writing, and as perceptive.”

Probably not as informed, though? “That hasn’t anything to do with being able to enjoy art,” says LaBeouf. “I think it’s sad when you have to be art educated to enjoy art. I don’t think that’s very good art.”

“And as soon as you say something’s not art,” continues Turner, “you have become an elitist. Our work is not in any way dumbed down, but it’s not translated into some kind of elitist language. It is what it is.”

A waitress comes to check on us as the noises of Friday night revelry rise from the bar. The three stare into their laps intently. LaBeouf met Turner and Rönkkö after he was accused of plagiarising a work by graphic novelist Daniel Clowes for his short film Howard Cantour.com. Googling for some art theory that could get him off the hook, he instead came across Turner’s manifesto for metamodernism, which the English artist describes as “a romantic reaction to our crisis-ridden moment: the idea is to return to some feeling or affect”.

Inspired, LaBeouf emailed Turner and the pair met. LaBeouf was filming Fury at the time, not far from where Turner lived. Turner involved Rönkkö, a previous collaborator, and the art collective was born. LaBeouf had become dissatisfied with his film career and – encouraged by Lars von Trier, his director on Nymphomaniac – started working on a new means of expressing himself. But why pick performance art?

“Why does a goat jump?” says LaBeouf. “There’s an animalistic urge to express love that I can’t express in film. I felt limited after coming out of Transformers. Or all the stuff I’d done with Steven Spielberg, not to pooh-pooh those films, but you have no creative control.”

Performance art gave LaBeouf, who has not given up film, the chance to explore the process of acting. “The guys I always looked up to – Daniel Day-Lewis, Sean Penn – I loved the myths I heard about how their performances were created. And I thought, ‘Oh man, it would be great if you could see the process, you’d enjoy the performance a bit more.’ That’s why I turned to performance art, because it’s just about the process. It’s all aired out.”