Anish and Antony to the rescue! Can the sculptors gentrify Afghanistan? - FAD Magazine
Skip to content 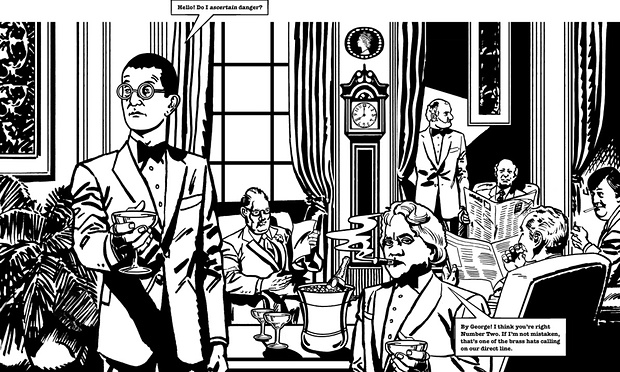 More about Hartlepool than Helmand … a frame from Anish and Antony Take Afghanistan by Scott King, with illustrations by Will Henry. Illustration: courtesy the artist and Herald St, London

This article titled “Anish and Antony to the rescue! Can the sculptors gentrify Afghanistan?” was written by David Shariatmadari, for The Guardian on Monday 30th November 2015 18.40 UTC

You could be forgiven for thinking otherwise. The magazine art director turned artist has created a strip, illustrated in Victor magazine style by Will Henry, which tells the story of Anish Kapoor and Antony Gormley “regenerating” Afghanistan through monumental art. It is a hallucinatory romp in which the country’s turbo-gentrification comes before a devastating fall. But this is a parable, King tells me, and a copy of Swift’s A Modest Proposal on his desk hints at the tradition he’s working in. The story is less about Helmand than Hartlepool.

“Lots of people immediately read Afghanistan as a metaphor for the north-east and how New Labour attempted to regenerate through totemic sculpture,” he says. King, originally from Goole in east Yorkshire, wanted to point out how absurd it was that, “in areas that have been wilfully run down and had their industry removed”, the solution could be gargantuan art. Think Gormley’s Angel of the North or Temenos, Kapoor’s 110m-long slinky spring, which straddles Middlesbrough dock. In King’s work, both men come off as preposterous narcissists.

“I don’t hate them,” he insists. “You might say I was jealous of them, but I’m not. I’m really not. My complaint is that there is a degree of arrogance and disconnectedness to what they’re doing.” Gormley’s sculptures are based on his own body, although the aim is to conjure up a sort of contemporary everyman. King concedes this, but says if you strip that explanation away, “This is a 65ft-tall version of himself with wings. Similarly, his proposal for the Olympic site was a 390ft-tall statue of himself. This is what dictators do. They build 400ft statues of themselves.”

King doesn’t like the word satire – he says it suggests “a kind of temporary pin-pricking” – but much of his work has been about cleverly taking the piss out of art and pop culture. Which is maybe why it’s a surprise to find that, in person, he’s down to earth, warm, and endearingly unsure of himself. He’s represented by the buzzy East End gallery Herald St, in London, and by Bortolami in New York, but tells me “I’ve done some crap work”. And although he was art director of I-D at only 24, producing covers with Kate Moss, Björk and Drew Barrymore, he doesn’t have the air of an arbiter of cool.

We sit in a small room in his house, sipping milky tea amid stacks of books about art, old records and scribbled Post-it notes. He is a strong physical presence, but not intimidating: stubbled, wearing T-shirt and jeans. Someone you might see reading in a quiet corner of your local. He says he never entirely bought into the dizzy world of parties and openings. “I look back 20 years and think I was an idiot because I used to go to the pub with my notebook, scribbling Joy Division misery.” He has the words Love Will Tear Us Apart tattooed on his right arm.

“I was in a privileged position as art director … you get into gigs for free, you don’t queue any more. I certainly didn’t exploit it in the way I could have.” He yearned to be a “real” artist. “I used to look at the YBAs and think that looks so much better than sticking down photocopies of pictures of Kylie or whatever.”

He didn’t have to wait too long. He recalls the night of his 30th birthday in 1999, basking in the glory of curating a show at the Institute of Contemporary Arts in London. “Where I’m from, coming to that! I remember going into the ICA bookshop having come to London to sign on and not being able to afford a book – [from that] to actually having a show.”

His particular combination of media savvy and art-world cachet attracted the attention of the Pet Shop Boys and Morrissey, for both of whom he has designed record sleeves. I almost get the impression he’s more comfortable in the world of music than art. He released a single in 2013 called You’re My Favourite Artist, a funny and dancable satire on fandom. The likes of Mumford & Sons get both barrels – he once told an interviewer that the band “represent everything that is wrong with this country today”. Now he remarks that Adele is “ruining our lives” with her brand of “dreadful pub karaoke”.

Despite King’s relative success, this still feels like punching up. At 46, he occupies an odd place in the art world. He’s neither blue chip like Kapoor and Gormley, nor Turner fodder like his friend Jeremy Deller, nor the latest hip young thing – a status he reckons the art industry sets far too much store by. He laments the lack of support for artists in the middle of their careers, of medium status. There’s also the “baggage” of what he calls “this design thing” that includes Cher Guevara, a poster he created to give away free to students, and which, 15 years on, refuses to die. “It’s something I regret deeply,” he says, but adds: “It was a good thing, it was quite funny.”

It’s this tension between self-belief and regret, and his sense of himself as an eternal outsider, that makes King appealing, despite his stinging critiques. He is a walking antidote to the artist-as-saviour. And if he ever does get that big public sculpture commission, we can be sure it won’t be tall, and it won’t be him.