Yvon Lambert first started amassing his contemporary art collection in the 1960s, and it includes works by artists including Cy Twombly and Donald Judd. He originally had a gallery in Paris, but relocated to southern French town Avignon in 2000. Twelve years later, Lambert donated the entire collection to the state, but it had already grown too large for its original space in the Hôtel de Caumont. So, after a competition, Berger & Berger was tasked with renovating both this mansion and its neighbour, the Hôtel de Montfaucon.

To connect the two buildings, the Paris-based studio designed a trio of new windowless structures. The aim was to create exhibition spaces that combines both traditional and contemporary styles of architecture.
Berger & Berger has added three new structures to a pair of 18th-century French mansions, creating a larger exhibition space for the collection of gallerist Yvon Lambert.

explained Berger & Berger, which is led by architect Cyrille Berger and his artist brother Laurent.

“The ensemble includes spacious galleries infused with natural light from the historical architecture and artificially lit abstract galleries that correspond more to the ‘white cube’ of big modern museums.”

The first of the three extensions is an atrium that joins the two facades. This structure was built from white concrete – the same material used to clad extensions to a fine arts museum in Spain. It also boasts walls of polished white marble aggregate and white terrazzo flooring. A white concrete staircase spirals up through its centre, framed by a four-metre-wide oculus in the ceiling above. As there are no windows, sunlight filters down exclusively from above, while fluorescent tubes create additional rings of light. 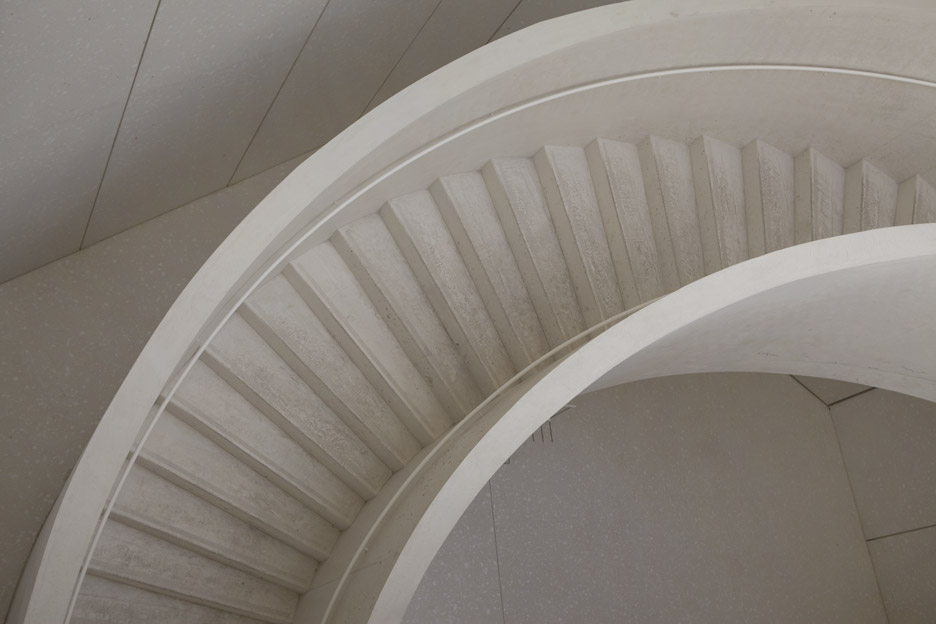 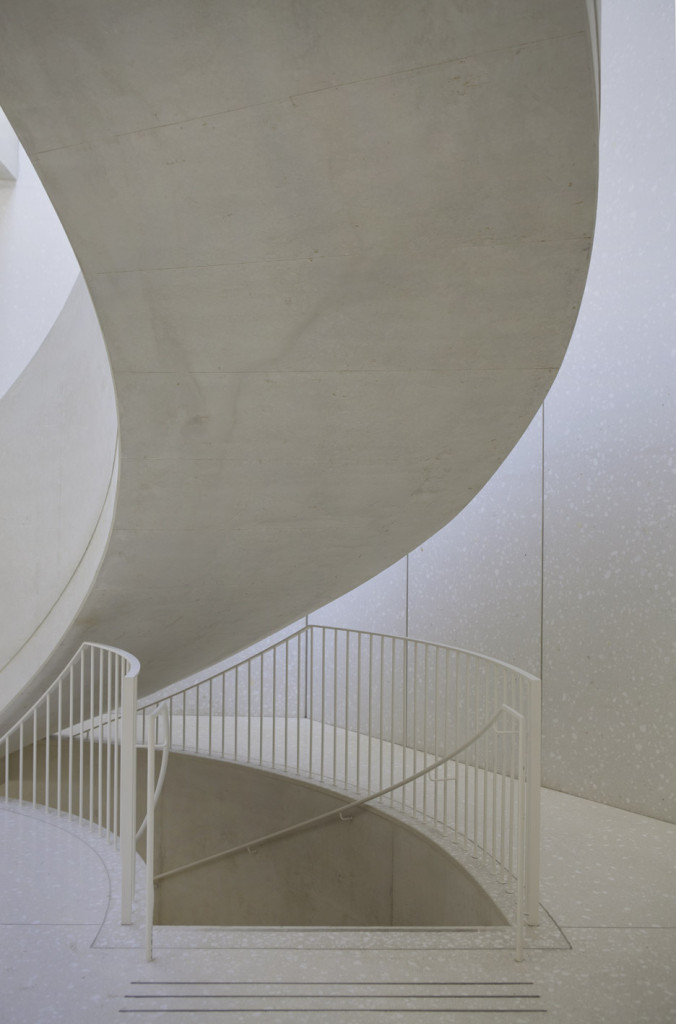 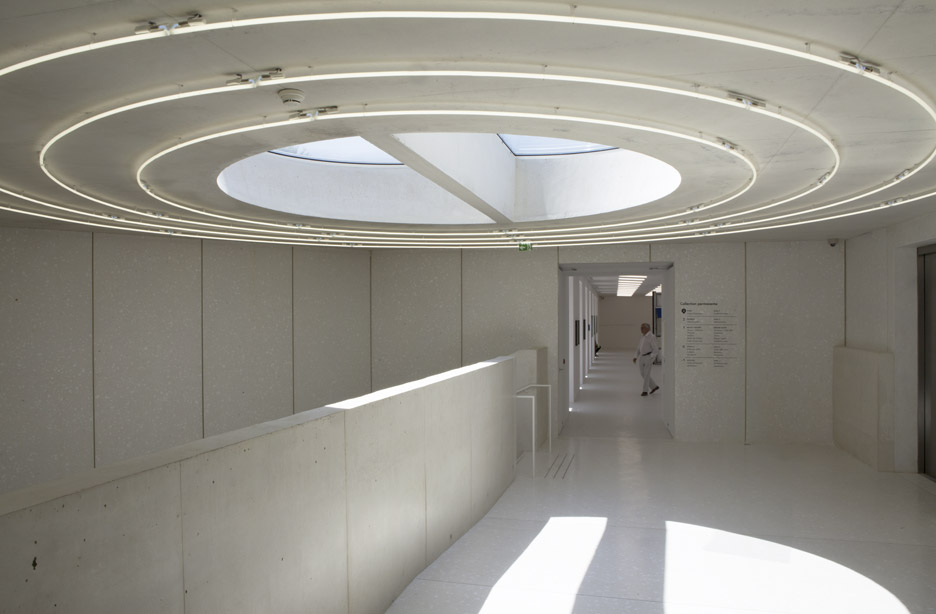 This 5.5-metre-high space features a coffered ceiling that creates a grid of square skylights. “Direct natural light cannot reach the floor or the walls in this room thus protecting the works on display,” said the studio.

In the former Hôtel de Montfaucon, the designers were able to create a large new exhibition space. This L-shaped space occupies the building’s first floor, providing approximately 400 square metres of space. It leads through to the gallery in the block next door. 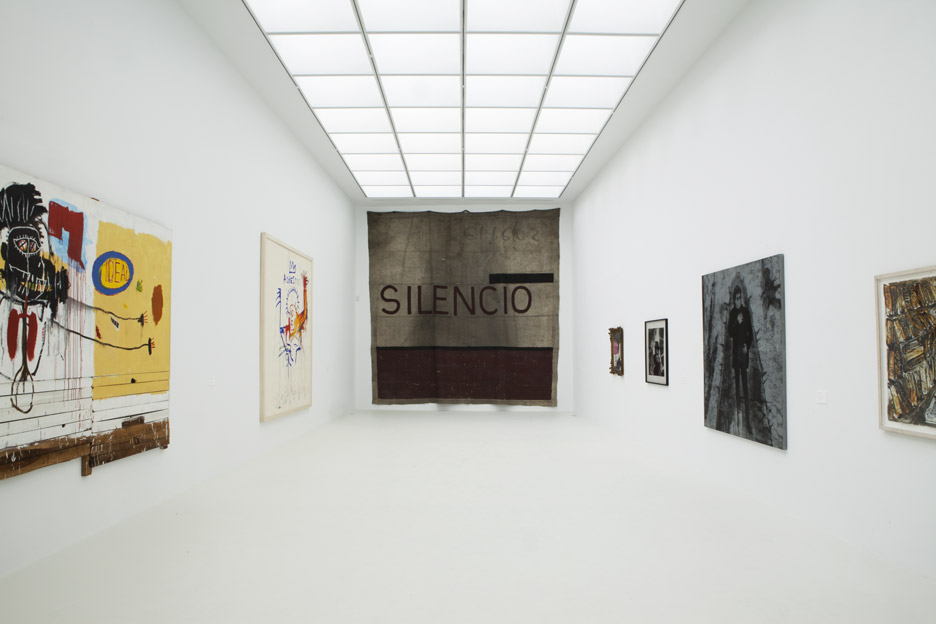 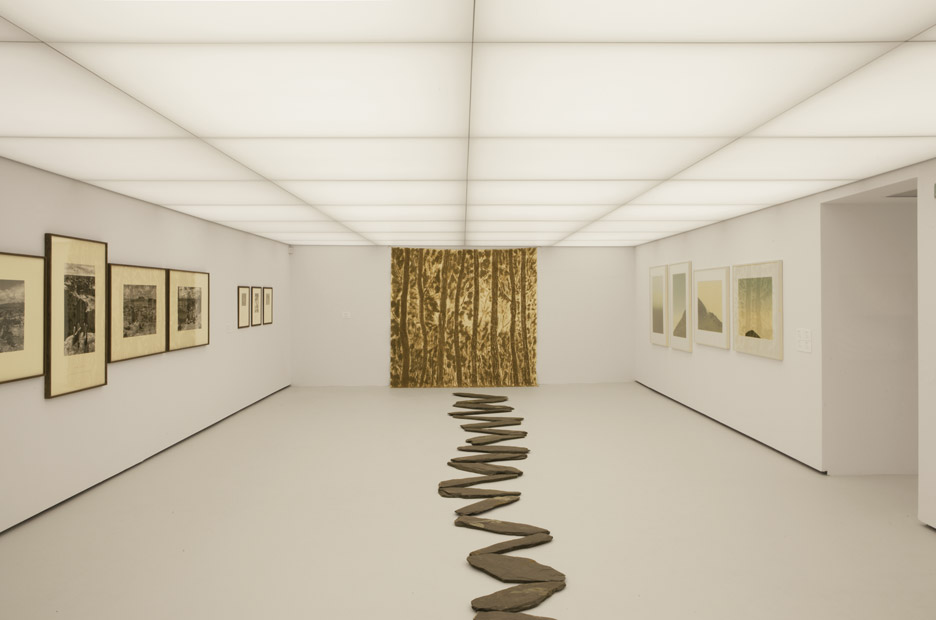 Additional exhibition spaces were created in three large basement rooms, now used to present light-sensitive material such as sketches and photographs. An auditorium is also located on this level, providing a venue for lectures and film screenings. Via Dezeen

The Collection Lambert en Avignon reopens to the public on 20th December 2015 with a large exhibition dedicated to Andres Serrano. The facility now has over 6,000 square metres of floor space – twice as much as before.
www.collectionlambert.fr

Yvon Lambert New York is pleased to announce an exhibition of new work by Candice Breitz. The exhibition features two […]