The mattresses become not just litter in the landscape but more like scary animals. – Ed Ruscha

Ed Ruscha has been casting his eye across the landscapes of the American west for over 50 years, taking in everything from gas stations to swimming pools to sublime mountain ranges. With their clarity and deadpan wit, his photographs, drawings and paintings impart a mood of playful awe on everyday monuments. The motifs for his new series Metro Mattresses were found, like so many of the subjects of his work, on the streets of Los Angeles. In each of the twelve works in the series we encounter a mattress, or mattresses, isolated and in various states of neglect, all depicted against a neutral backdrop.

Ruscha noticed the mattresses cast aside on the streets of LA and began photographing them systematically before translating the images into pictures on paper-like museum board. The consistent neutral background emphasises the typological nature and the heightened formality of the series, transforming the boxes of springs and padding into geometric abstractions. Yet the rhomboids and rectangles slump and fold with age, while the jagged rips and occasional trickles of fluid remind us that the mattresses have absorbed countless intimate experiences. 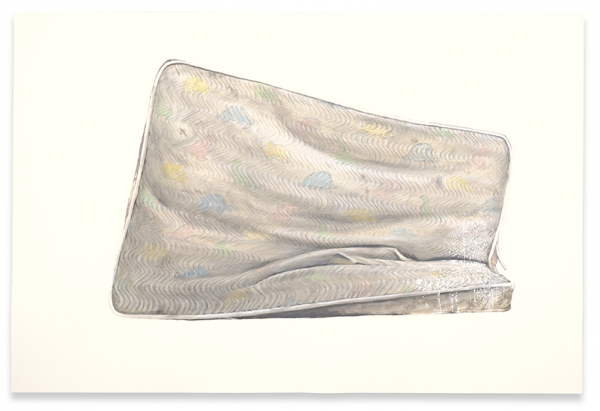 In addition to the mattresses, three ‘word’ pictures – as important to the artist’s œuvre as landscape – also feature in the exhibition. Spelling out the title ‘Metro Mattresses’ or ‘Metro Matt’, and blazing across the paper like advertising slogans, the drawings on paper underline the melancholy humour of the series. If the word metro evokes a big city teeming with anonymous people, nothing offers a more intimate corner of daily existence than a mattress. 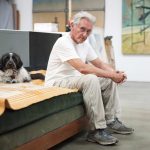 This spring, Oklahoma Contemporary will present Ed Ruscha: OKLA, the first solo exhibition of work by Ed Ruscha in the artist’s home state and home town