The Italian artist Gaspare Manos reinterprets a world lost in the 20s when Picasso experimented with the visual imagery of the African masks. Keith Haring,Howard Hodgkin,Damien Hirst and especially Lucien Freud encouraged him to paint and Rosa Maria Malet, Director of the Joan Miro Foundation wrote

“he is the heir to the great painting tradition of his country”.

In a new art exhibition, titled Origins, at the Regent’s Park new art gallery Le Dame which specialises in the best of Contemporary Italian Art, Manos presents a series of paintings using layers of pure ground pigment strongly influenced by his time spent in Nairobi. He transcends it and becomes a shaman where rituals of fertility, creativity and protection, perhaps from the evil, take place. The viewer is invited to go back to their primitive roots, to go back to basics, to the important, to the crucial; to what matters most in life. Gaspare’s paintings achieve a sense of space and three-dimensionality where everyone is absorbed into another dimension. An open window to other realities.

Le Dame Art Gallery is honoured to be hosting the first UK solo exhibition by artist Gaspare. He is an artist of reminiscence as his works are vivid and powerful memories of a journey rich in encounters and experiences. He therefore speaks a universal language, sharing a global emotional memory with the viewer through the canvas. 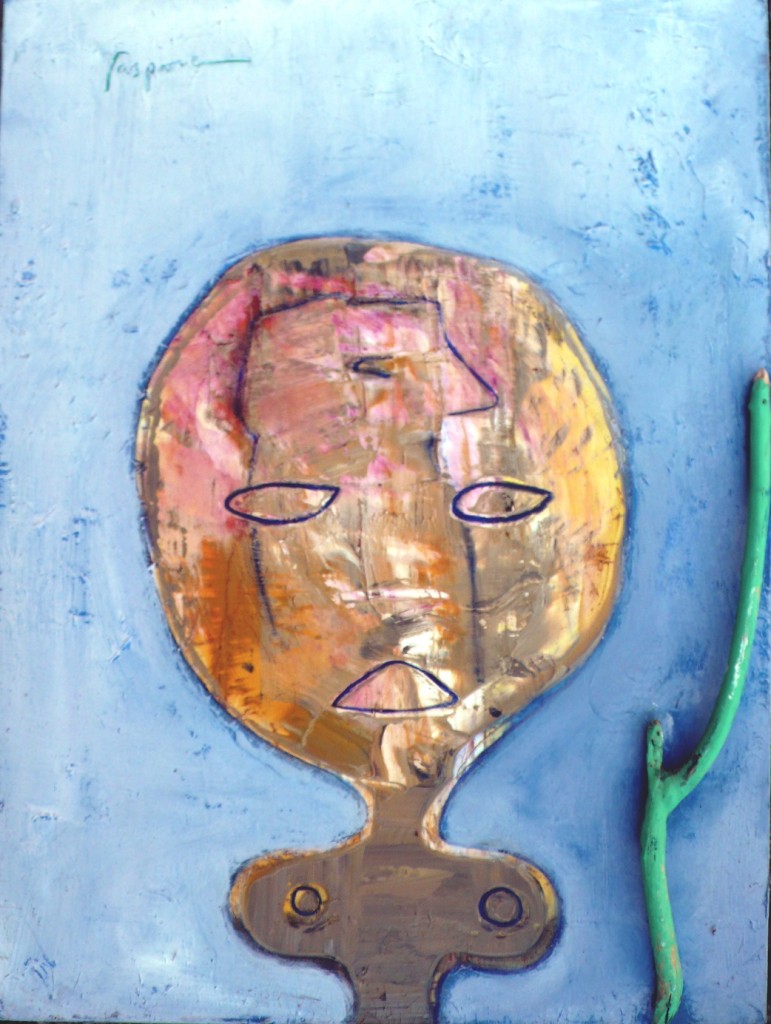 Miguel Mallol, has kindly agreed to respond to the following questions:

Can you please tell us a bit about your background?
After completing my degree in the History of Art in Valencia in 2002, I moved to Venice where I pursued a grant at the historical institution the Querini Stampalia Foundation. I had the opportunity to meet a lot of artists and become involved in the Venice cultural environment. This gave me the chance to curate small exhibitions for emerging artists and work in Matteo Lo Greco’s Art Gallery, helping him in the organisation of “L’aoristico” a solo exhibition in the Galleria Internazionale di Ca’ Pesaro in Venice. I returned to Spain in 2005, where I worked as an independent curator and collaborated with “El Mundo” newspaper in its cultural department. In 2007, I went back to Venice where I met Gaspare. I worked as his PA as well as collaborated on other projects such as “Urbis” at the Museo Diocesano in Venice. Since my arrival in London, my aim has been to understand the art mechanism in one of the most relevant cities in the world for contemporary art in order to carve a place in this competitive environment. Currently, I write about contemporary art for several specialised websites and catalogues, manage Le Dame Art Gallery’s 2015 exhibition programme, and oversee several independent projects in the UK and abroad.

Why have you decided to curate a solo show by Manos?
There are some artists that I have a special appreciation for because of the quality of their work or sometimes because they have been important to me in a particular way. From our collaboration and time spent together, I thought for a long time that it would be perfect to complete this period with a Gaspare solo exhibition curated by me. I am sure it won’t be the last that we will do together, but this is like closing a stage and also opening a new and challenging one.

Do you personally know him? What is he like?
I had the chance to spend time with him at his studio in Venice. We talked often, discussed loads of things and I had the opportunity to learn from the artist and get to know the person a little bit better. He has the methodical strategies of a broker within an artistic and exceptionally creative mind. His art is his life and vice versa. He knows that has things to say and you can see this in his paintings. Sometimes they are ironic, sometimes biting and most of the time purely realistic…

Where does the title Origins come from?
He has lived in several countries and it has given him a broad experience of cultures and societies but there is something inherent in his paintings, drawings and installations: the phenomenology. It is the roots behind the events that act like a mask; he looks beyond the first impression to uncover the origins underneath. The mask is an important element for him because it represents the African and Venetian traditions, two crucial places in his life. He has a collection of African masks that were his inspiration for the paintings displayed in this show and as he said “…it is especially relevant to remember the past to understand the present”.

What is your next project?
Until the end of the year, part of Gaspare’s exhibition opens on the 13th of October, and I have the PV with colour and sound performance of “Unexpected. Play the colour of movement”, an interactive art installation by Max Ciogli at Core@Nolias Art Gallery. At Le Dame Art Gallery, we will have two solo exhibitions: “Eden” by Rafal Zawistowski in November and the 2015 Exhibition Programme will close in December with “Toys”, Rubén Fuentes Fuertes’ first solo show in London.