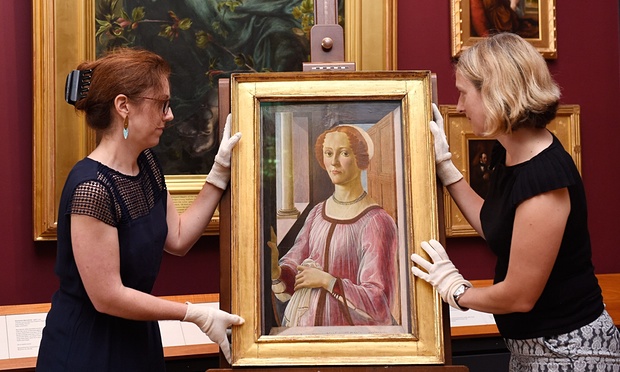 The Portrait of a Lady known as Smeralda Bandinelli, by Sandro Botticelli at the V&A in London. Photograph: Facundo Arrizabalaga/EPA

This article titled “Botticelli Reimagined exhibition coming to V&A after opening in Berlin” was written by Jonathan Jones, for theguardian.com on Thursday 27th August 2015 12.24 UTC

Maybe Helen of Troy’s beauty launched a thousand ships but Sandro Botticelli’s paintings of Venus, Pallas Athena, Simonetta Vespucci and other women, both real and mythical, have inspired countless imitations that will form a constellation of ideal and profane love in Botticelli Reimagined, a blockbuster show that opens at the Gemäldegalerie in Berlin next month before coming to the V&A in the spring.

From David LaChapelle’s opulently kitsch 2009 photowork Rebirth of Venus, to a Botticelli-themed dress by Dolce and Gabbana that Lady Gaga wore for her Artpop tour, to a clip of Ursula Andress emerging like Botticelli’s Venus from the waves in the 1962 Bond film Dr No, this bold exploration of a great artist’s afterlives trawls far and wide through popular culture.

It will even have music, including Bob Dylan’s Sad-Eyed Lady of the Lowlands (in another song, Dylan tells how “Botticelli’s niece” promised to be with him “when I paint my masterpiece”).

Curators Mark Evans and Ana Debenedetti said the only problem was knowing where to stop: “We excluded huge amounts of trash.” And yet this is not just an arbitrary attempt to make a Renaissance artist look cool by throwing in Andy Warhol’s silkscreen of The Birth of Venus and Rineke Dijkstra’s photographs of teenagers adopting Botticelli poses. It all makes a kind of mad sense. The clue that holds it together is the V&A museum’s only Botticelli painting. It happens to be not just a haunting example of his portraiture of women – she looks straight out of the picture, so directly that some time in the past, someone spooked either by the “evil eye” (malocchio) or by misogynist fears of a female gaze actually slashed her eyes – but a document of Botticelli’s unique relationship with the modern world.

Other Renaissance geniuses like Leonardo da Vinci, Michelangelo, Titian and Raphael have been famous since their own lifetimes. Botticelli, however, was forgotten for centuries and only started to become an art hero in Victorian times. The V&A’s Botticelli belonged to the Pre-Raphaelite painter Dante Gabriel Rossetti. It hung in his Chelsea home at exactly the moment the Botticelli cult got going. That’s what makes it the pivotal work in Botticelli Reimagined, a document of modernity’s queer relationship with this 15th century artist.

For Botticelli is not just a modern cult; he is, somehow, a modern artist. We subconsciously accept him as an artist of our own uneasy world because he shares our own sense of the strangeness of things. The Victorian critic Walter Pater tried to articulate this back in Rossetti’s day, in an 1870 essay that helped to launch Botticelli’s fame. Writing about an artist who was still far from a household name, he observes that Botticelli’s women are “in a certain sense like angels, but with a sense of displacement or loss about them – the wistfulness of exiles”.

What a brilliant remark and what a quintessential definition of the modern condition. Botticelli’s Venus is an exile, a sad-eyed beauty of the waves, half way between heaven and earth, moving towards us as our hearts go out to her. It is the melancholy in her eyes, the “shadow” on Botticelli’s beauty as Pater put it, that makes his vision of Venus modern. His paintings make the pagan gods alive with a naive intensity that disrupts and invades the imagination. He is a 15th century surrealist – an artist who makes dreams utterly real. It is highly likely he intended some of his paintings, including Venus and Mars in the National Gallery and perhaps even his pagan masterpiece Primavera (Spring), to act as magical charms. They do have a strangely real and actual effect, as if looking at a work of art could change your very being.

That too is modernist. “You must change your life,” urged the modern poet Rainer Maria Rilke in a poem about the power of art. No artist makes me feel that like Botticelli does. His life, too, makes him modern – especially today, in our world of fundamentalisms. Botticelli’s life is cut in two by belief. After creating his sublime visions of pagan myth he became a follower of the revolutionary prophet Savonarola, rejected sensual beauty and devoted himself to illustrating Dante. Clearly Botticelli was a genuinely turbulent character, a man of troubles – a modern man, in a pre-modern way.

So the very best news about Botticelli Reimagined is that after all the Bond films and Dylan songs, it will unveil the biggest haul of original Botticelli paintings to come to London in a long time. Pallas and the Centaur is coming from the Uffizi Gallery with its uncannily precise and convincing portrayal of a creature who is half man, half horse. Anticipating Freud’s theory of the unconscious, this painting shows the goddess of reason restraining the animal passions of our nature – she gazes icily as the centaur struggles, caught by the hair. Botticelli’s Dante drawings, portraits and one of his depictions of Venus will bring his seductive, subtle and strange genius head to head with his modern imitators. The world changes but Botticelli changes with it. He is the poet of our exiled souls.