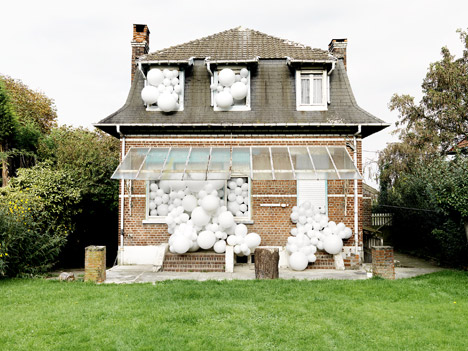 This article titled “Artist to fill Covent Garden market with 100,000 balloons” was written by Hannah Ellis-Petersen, for The Guardian on Tuesday 18th August 2015 06.00 UTC

A French artist will fill the interior of Covent Garden market with 100,000 glowing white balloons as part of a vast pop-up installation.

Charles Pétillon, who is known for his technique of using balloons to create eerie images in everyday settings – from swimming pools to children’s playgrounds – will create his largest sculpture yet in central London, stretching over 50 metres across the ceiling of the South Hall of the market building.

For the installation, titled Heartbeat, hundreds of thousands of latex balloons will be tied together with pulses of light sent through the floating cloud.

Pétillon said he uses balloons both because they are a universal symbol of joy that brings a playful element to his work, and because they have the power to add an alien quality to mundane scenes.

“I want to change people’s point of view, their perspective of a place they see every day and never really look at,” said Pétillon. “A swimming pool, a field: if I suddenly put something strange in it like these balloons you will see it differently. I don’t want my works to be seen just as decoration, there is always something they are trying to draw out or question.”

Heartbeat will be the first installation Pétillon has created outside of France. He said he wanted to use balloons as a way to explore the history of Covent Garden.

“When Covent Garden was first built in 1552 it changed the whole landscape of this district and of the city,” he said. “Yet most of the people who come here, they forget that this place has a history that stretches so far back. Most of my photos talk about this idea of forgotten memory, so again with Covent Garden I wanted to connect people with this past of this place and remind them of all the history that makes this such an iconic place.”

He added: “By placing the balloons here, I want to refresh their view of this building and my hope is that as people walk around the installation, they will view this whole building with new eyes and will spend more time discovering and looking.”

The commission is part of Covent Garden’s annual cultural programme, which has seen Alex Chinneck, Jeff Koons and Damien Hirst take over the market and piazza in previous years.

It will take a team of 25 people five nights to inflate each of the 100,000 individually sized balloons, weighing a total of 320 kilos, before the sculpture can be installed. This will also be the first time that one of Pétillon’s balloon sculptures is on show to the public. Previously he has exhibited photographs of the sculptures, such as Invasions, his best-known series to date.

To accompany the 50-metre sculpture, a pop-up gallery on the Covent Garden piazza will showcase several of Pétillon’s balloon photographs. The artist said he was constantly fielding questions about whether or not the balloon sculptures on his photos were real, and said the Covent Garden work gave him the chance to prove, on an enormous scale, that his works were never faked or Photoshopped.

“I have never done anything on this scale so it has been quite daunting ,” said Pétillon. “Because it is such a historic place, we had to be very careful – I wouldn’t want to be the French man who made Covent Garden fall down.”