Dungeness: where the wild west meets the post-apocalyptic - FAD Magazine
Skip to content 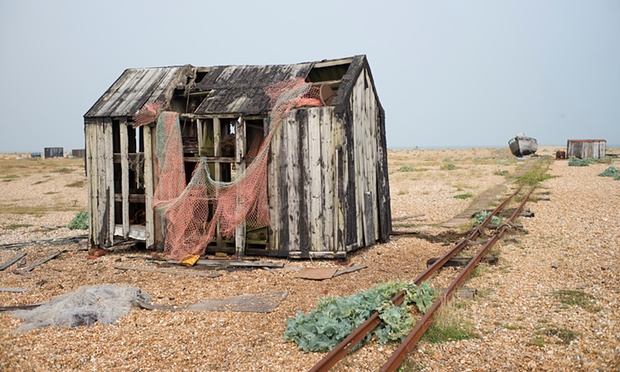 Dungeness: ‘… so intense I felt on the verge of a spiritual awakening’. Photograph: Graeme Robertson for the Guardian

This article titled “Dungeness: where the wild west meets the post-apocalyptic” was written by Zoe Williams, for theguardian.com on Friday 14th August 2015 18.19 UTC

They call Dungeness the desert of England, though experts observe that, lacking both the dearth of water and the extreme differential in night and day temperatures, it fulfils none of the desert criteria.

The landscape certainly divides people – a broad, echoing flatness with the famous nuclear power station on one side, the shingle dipping into the sea on the other; railway carriages turned into quaint and spooky dwellings; newcomers from “that London” planting black, post-apocalyptic architecture alongside. It’s so intense I felt on the verge of a spiritual awakening and, to head it off, asked the photographer a boring question. “Are we coming on to the promontory now?” “I don’t know,” he replied, “I’m just happy the car’s locked.”

The nature reserve is incredible: a third of Britain’s plant species can be found in this one area, and the waterbirds bob about oblivious to how rare they are.

The 190-hectare (468-acre) Dungeness estate is up for sale, for £1.5m. It includes the ground rent on 22 cottages, but doesn’t include the pub, the power station or either of the two lighthouses. In the 90s, people went to Dungeness because Derek Jarman, the seminal art house film-maker, lived there: everybody did fashion shoots in his front garden, and there’s now a note in the window saying: “No fashion shoots in my front garden, without prior written permission”.

Even then, it was by no means the only arty house on the beach. In 1994, just after Jarman died of Aids, a photographer and I accidentally did a story on the wrong house (then we went to the pub, and he used the urinal next to the barman, and we both got kicked out because of his Prince Albert, which you may have to look up elsewhere on the internet).

This time around I meet Jodie Snelling, 37, standing outside Jarman’s (actual) house with her mother, Susan, 63. “I read somewhere that it’s like the wild west, and it is, isn’t it?” said Jodie. “It really is!” I agreed, feelingly. “I came for the plants,” Susan said. Jarman’s garden is still intricately tended, round beds of intensely weird vegetation that can’t decide whether it belongs on the land or in the sea.

“Look at this house next door,” Susan said, vexed. “It’s so untidy! If you lived next door to somewhere where you knew people were thronging, you’d tidy it up a bit, wouldn’t you? Sorry, I’m being my mother.”

That must surely be the point of the sale, that people do throng here, and anywhere that people throng to, there’s a way to monetise it: no owner, old or new, could hope to develop the land, which is all protected. It’s reminiscent of the sale of Saddleback mountain in the Lake District – everybody gets very upset about it, but with no potential to either change the area or restrict access to it, should we mind?

Way O’ the Wind cottage, truly in the way of the wind, sits beside the Dungeness fish shop. Doreen Thomas, 89, moved here when she was 21. She met her husband in the street, dancing, on VJ day, 70 years ago today. “Let me tell you something: I got bombed, doodle bugged and rocketed, I never got scratched. My dad was in the army, two uncles; the man I was supposed to marry got shot down. And then after it all, I came here. It’s awfully sad when things change, but I don’t think they can change it very much. You can’t build here at all, and I think that’ll stay the same.”

Her son-in-law, Tony Greenland, tells me the exact date that he first came to Dungeness: 31 March 1961. That’s quite an acute memory, I observed. “I came to see a specific bird which was unique,” he explained. “So of course I’d remember the date.”

He says the area has already changed radically. “The extraction of the shingle has reduced the water table, so we now have forests out there rather than the vegetation that we used to have. This was all under water before. This garden was under water.”

His wife, Doreen’s daughter Christine, 65, remembers the truly seismic change: the building of the power station, when she was 11. “My dad fought that, all the fishermen did.” She smiled ruefully. “But we didn’t get anywhere”.

The problem with the power station, apart from all the nuclear power, is the noise attenuation of shingle. “You can hear somebody talking half a mile away.” So they must know their neighbours pretty well. “The people who live here,” Doreen said firmly, “are not local. They’re from London. It started with Derek Jarman. What he did with his life was his business, but he was a lovely fella.”

Of course you want to know; who wouldn’t? Greenland’s bird was a stone curlew.