After finding herself unable to tune out the chilling visuals of global atrocities in the news, Celina Teague was moved to interpret the colourful narratives of world events that would become her forthcoming exhibition, I think therefore I #. 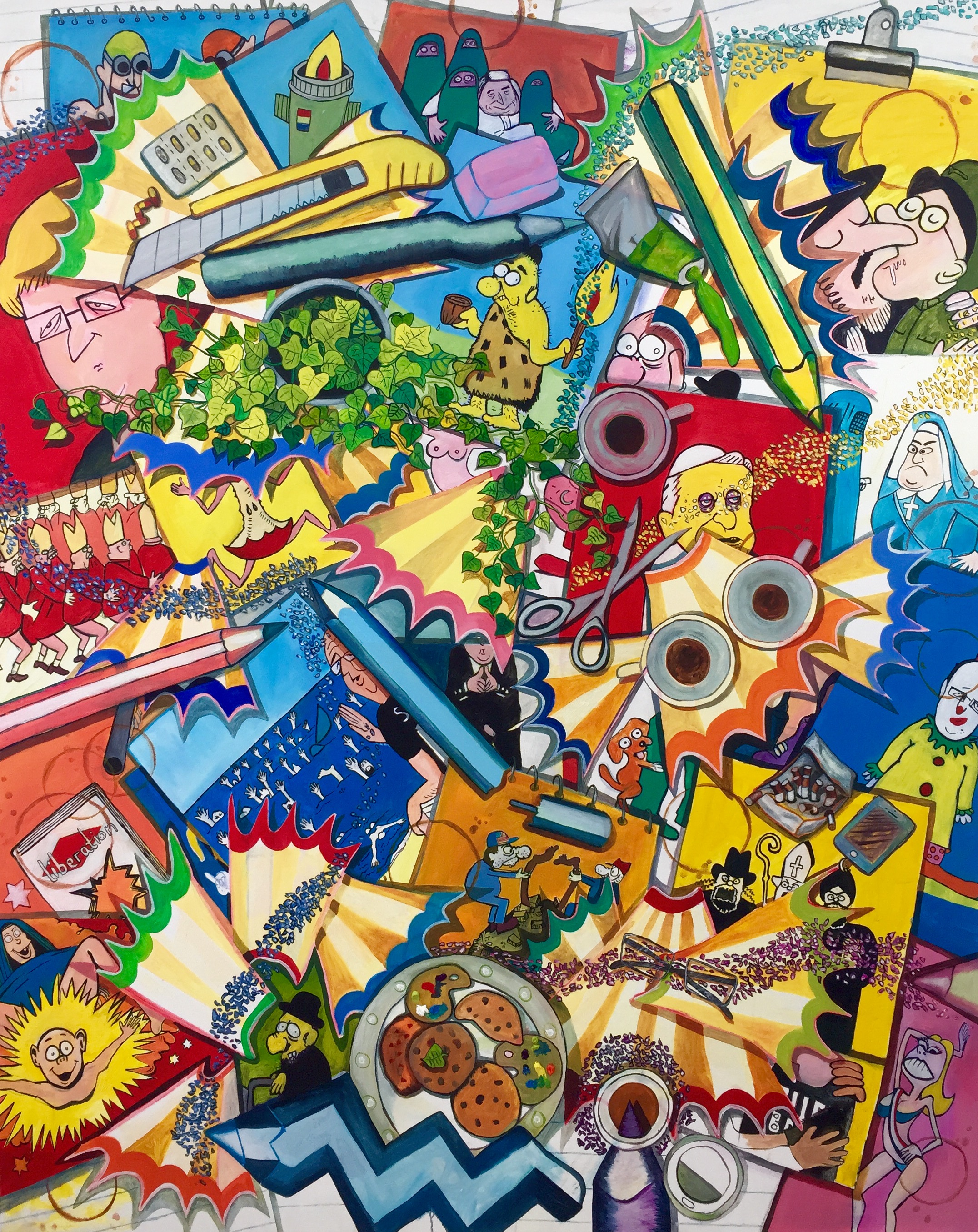 While the paintings themselves are graphic, primary coloured and seemingly optimistic compositions decorated with popular iconography and emblems – the messaging is anything but sunny. Weeks after the Charlie Hebdo shooting, a video of Jordanian pilot, Moaz Al Kasasbeh being burned alive was beamed to a global audience. The harrowing daily news feeds of decapitated children, old men being pushed off buildings and beheadings of journalists, civilians and aid workers continued; Teague began her riff on hashtag activism, feeling like a new low had been reached. 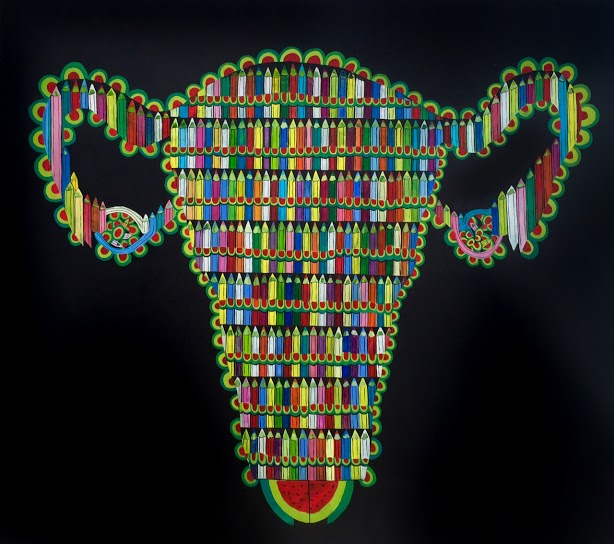 i am no one oil and acrylic on canvas

“I had never seen anything like this. I don’t think I’ll ever forget some of the faces of those individuals in their final moments. I was dreaming about them at night and couldn’t shake them off during the day. Of course, horrors like these aren’t new. But they feel different because they are literally coming into bed with us at night and they wake us up in the morning. Social news gathering has given the world a new dimension of some of the major stories of our time. We’ve watched the Arab Spring, the Burmese uprising and closer to home, the London riots, yet the proliferation of social media means that it’s nearly impossible to turn on the TV or surf the internet without a notification of a new world disaster. Teague states as a result of a 24-hour news cycle accessed via a mobile phone or iPad, we’re culturally partaking in “24/7 tortuous voyeurism.” 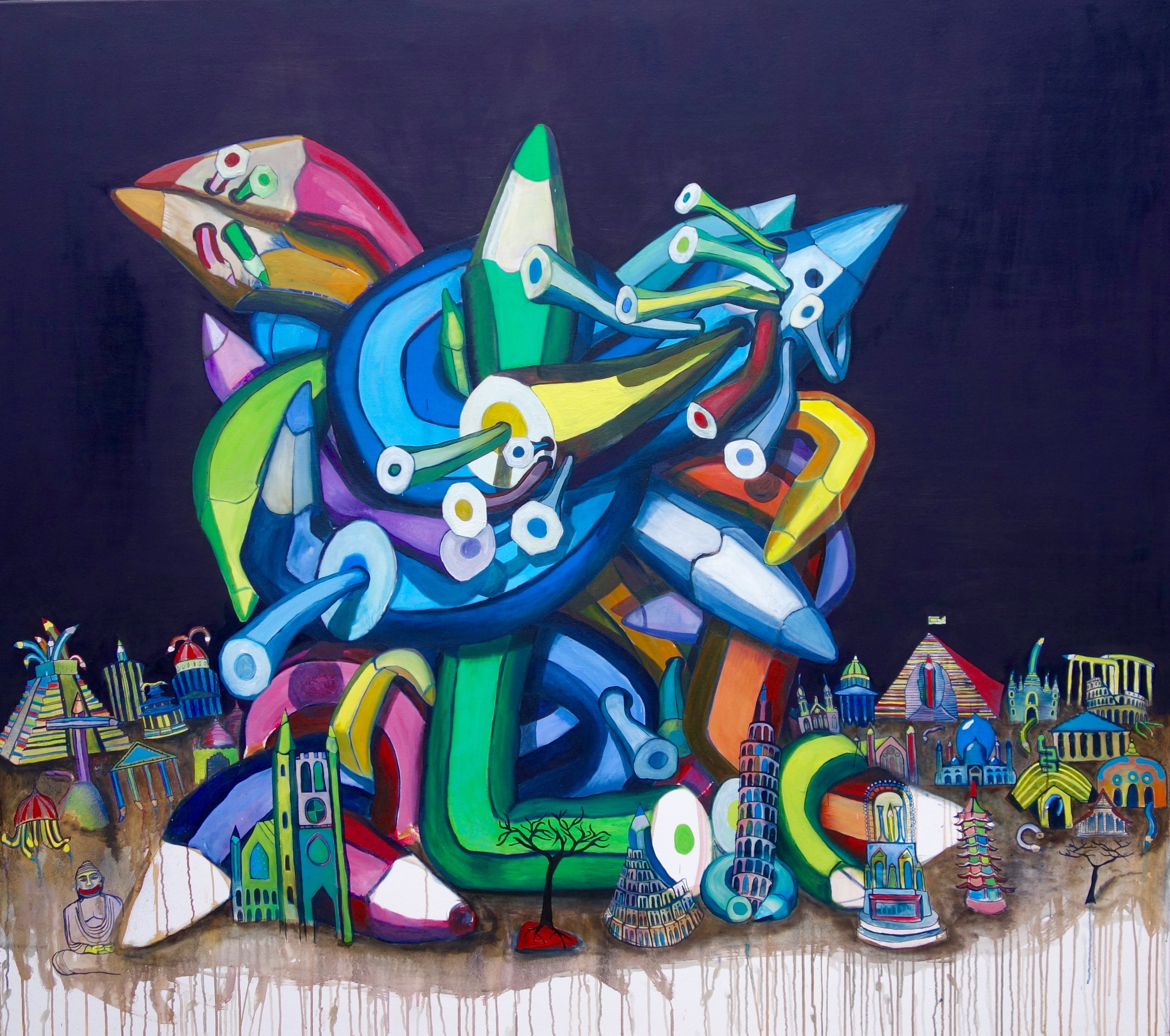 What Teague has explored in this body of work is the space in-between the frippery and the catastrophes that are accessed on our phones and tablets. While twitter and other media social platforms do not have the magical powers that can overturn a crisis or right injustice, they can work-up enough attention to put events on the front pages and on the top of a news agenda. 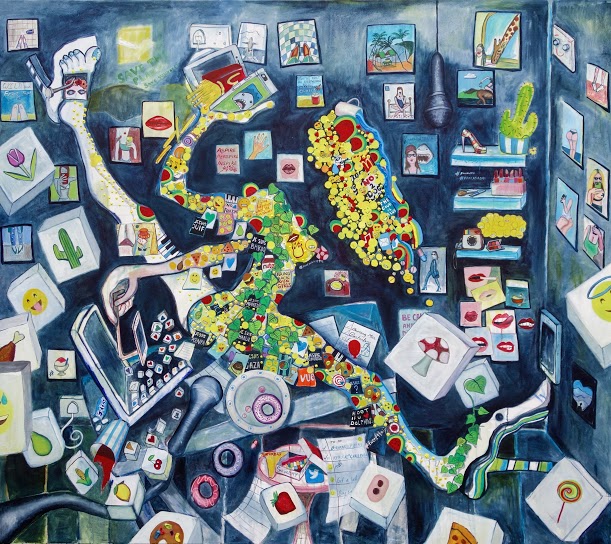 i think therefore i hashtag – oil and acrylic on canvas

Teague understands that social and political problems continue long after we stop hashtaging them.
Can tweeters really change anything by posting a comment before tuning back to their favorite television programme? Teague explains that although the collection of work pokes fun and questions armchair activists, she does so with the knowledge that she herself is one of them. She says,

“I actually do believe that social media can be an effective force for good. Take ALS, I hadn’t even heard of it before the ice bucket challenge. Likewise the Yulin dog meat festival is something I’ve known about for years but suddenly it’s hit the social media storm.”

Of the causes that we flaunt on social media, she says,

“I think education and knowledge will save the world…in time. Social media will be instrumental. It can pull us together more than it divides.” 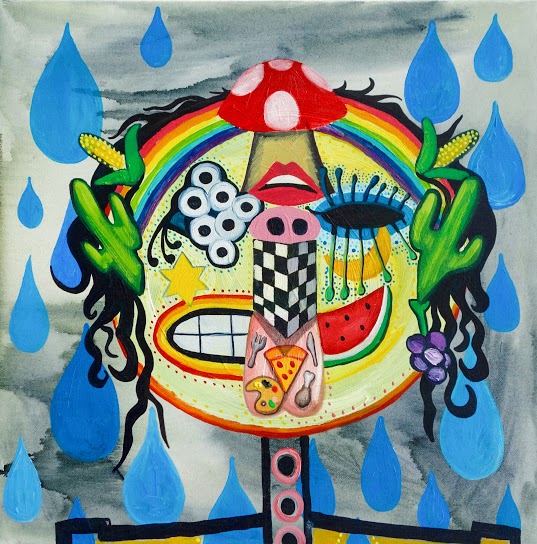 i speaki emoji – oil and acrylic on canvas

Teague says that what interested her was the space in between the seduction of other people’s heavily filtered lives on social media. She reasons,

“everyone wants to tell a story – you, me, journalists, Isis – we all want to play with this new system of editing and uploading our story to an instant audience.”

Yet what would have been considered vain prior to social media, narcissism is now the norm and with Instagram allows us to present an edited glossy magazine version of our own existence.

She explains that essentially, painting the news has enabled her to digest the flip side of social media. She describes painting as the perfect medium to scrutinise the context, she says,

“purely by virtue of it being slow to burn.”

The self-serving social networks are divisive, she reckons 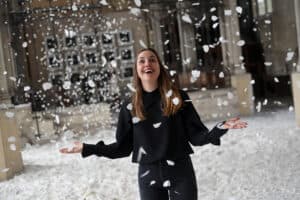 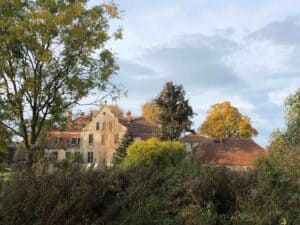