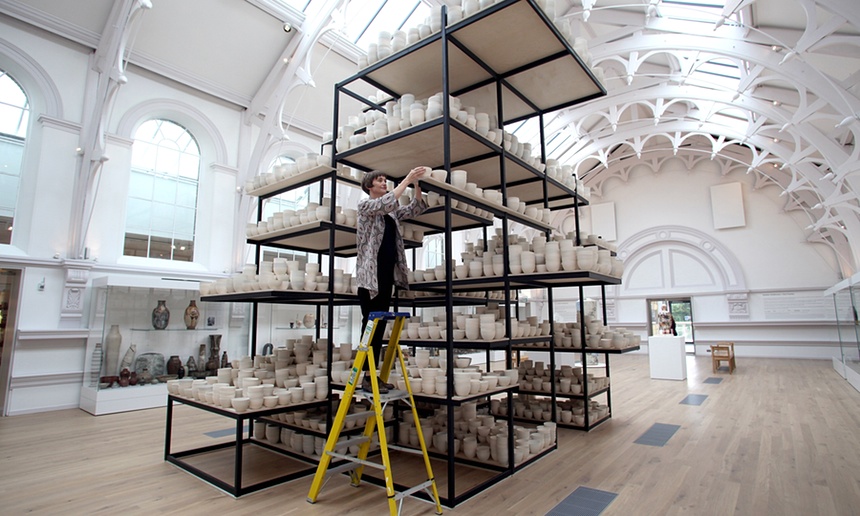 This article titled “Funding cuts could spell end of free museums and galleries” was written by Mark Brown, for The Guardian on Thursday 23rd July 2015 14.55 UTC

Regional museums and galleries may have to introduce admission charges as local authorities face continued funding cuts, the Museums Association has said.

The warning came as it emerged that York Art Gallery wants to charge local residents and tourists a £7.50 entrance fee when it reopens next week after a two-and-a-half-year, £8m redevelopment. Brighton Museum and Art Gallery began charging a £5 entry in May, although it is free for residents.

The association’s president, David Fleming, said charging for entry was on the agenda of many councils across the UK. “I’m absolutely certain that museums all over the country are considering introducing admissions fees in order to try to help plug the gaps that are appearing in their budgets,” he told the BBC.

Similar debates were taking place “behind closed doors” across the UK, said Alistair Brown, the association’s policy officer, expressing sympathy with York Art Gallery, which has seen its council funding fall from £1.5m to £600,000 in three years.

John Orna-Ornstein, director of museums at Arts Council England, said many council-funded museums had already cut staffing, public programmes and hours. “We are not far from a tipping point where they are having to make quite difficult decisions,” he said.

Janet Barnes, director of the York Museums Trust (YMT), said the gallery was not introducing a charge “lightly or willingly”, but because it needed to fill the gap caused by a reduction in funding. “The art gallery is now a bigger place, it will require more energy, more staff to invigilate it and run it, so we have to bridge that gap,” she said.

The York and Brighton cases cast light on a wider debate about whether all galleries and museums should be free. Entrance charges at national museums were scrapped by Labour in 2001 and many regional museums followed suit.

“People have no problem about theatres charging,” said Barnes. “You buy your books. In a way this thinking is a habit and unfortunately this financial situation means we can’t continue this habit.”

As an alternative to the £7.50 charge, people could buy a YMT card for £20 and get unlimited access to the gallery, York Castle Museum and the Yorkshire Museum for a year, said Barnes. “I think that is good value for anybody,” he added.

The YMT director believes that more museums will start charging visitors. Brown agrees, although he warned it would not be the panacea some councils imagined it to be. It may work in tourist honeypots, such as Brighton and York, but would lead to sharp falls in visitor numbers and shop and cafe revenues in other towns and cities.

There are around 1,300 accredited local and regional museums of various sizes. Around 60% of them are independent, with two-thirds charging admission fees.

“Many of the strongest, largest and most expensive to care for collections are in important northern civic museums such as Preston, Blackburn and Huddersfield,” said Orna-Ornstein.

“We have these extraordinary civic collections, they touch on just about every part of the world. Go to Blackburn, it has a consecutive sequence of Roman coins covering every emperor, obscure and weird but kind of wonderful, there are only two like that in the world – one in the British Museum, one in Blackburn.

“We need to find new models for supporting these wonderful civic collections, because if we lose them now we will regret it enormously in future generations,” he said.

The debate at the moment is about regional musems. The government pays around £400m for national museums and the Conservatives promised that the free entry introduced by Labour in 2001 would remain. Whether that stays the case as the chancellor George Osborne orders departments to model 40% and 25% cuts is another question.

“No museum is free, they all cost a lot of money to run and somebody has to pay,” said Orna-Ornstein.

Related: From Rabbie to Rubens: 10 years of free entry to museums

The debate came as York hosted a preview of its new gallery on Wednesday, showing off a transformation that gave it 60% more space on the same footprint and that allows it to properly display its world-class collection of ceramics.

The gallery is making no bones about wanting to be seen as one of the best regional galleries in the UK. It is one of the last big-capital arts projects to be completed from the pre-austerity years and the closure was undeniably long, said Barnes.

Architects Ushida Findlay drew up the plans, which provide new first floor galleries as well as a mezzanine level in the roof space which will now house a new Centre of Ceramic Art.

York has the biggest collection of British ceramics in the UK. Three years ago, it displayed less than 200 in a single “gallery of pots”. When it reopens it will display 2,000, not counting the 10,000 ceramic bowls that make up an enormous newly commissioned installation by the artist Clare Twomey.

In another room is a dramatic 17-metre wall of mixed ceramics reflecting the colours of the rainbow. “It is just showing off about how many we’ve got really,” said curator Helen Walsh. “And to show pots are not just brown.”