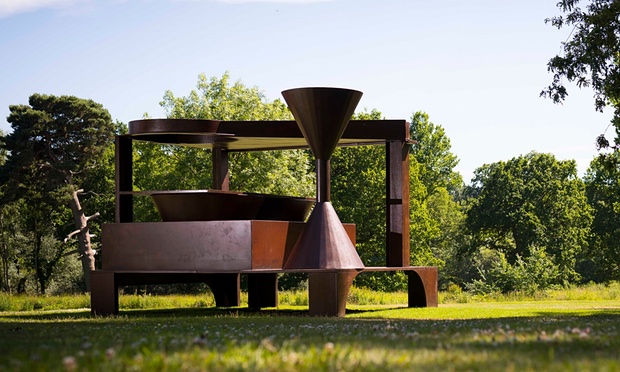 This article titled “Anthony Caro in Yorkshire review – sculpture that can take your breath away” was written by Adrian Searle, for The Guardian on Thursday 16th July 2015 16.41 UTC

A sculpture called Window stands by a real window. The sun slants in, making a wedge of light bright on the floor. Anthony Caro’s 1964-65 work leans toward the light, making way for it but also gesturing away. An olive-painted grille filters the view. Other, darker green shapes make shadows, reach together and apart.

It is hard to know where to put yourself – between the grille and the sunlight, or between a standing beam and a rectangle of steel already warmed by the sun. The choice is yours, but watch out for that other beam on the floor. Keep on looking, keep on turning. Through the window is a playground, with kids climbing things and running around. One of them is crying. Perhaps she fell. There seems to be a connection with the artwork in the room.

The year Anthony Caro made Window, he was described by critic John Richardson as making sculpture so new that it made Barbara Hepworth’s work look dead as dodo eggs. Fitting then, that Caro is now showing at the Hepworth in Wakefield, just as Tate Britain hosts a Hepworth retrospective.

The Hepworth’s beautifully installed Caro show takes us from his first, groundbreaking 1960 painted and welded steel sculpture Twenty Four Hours, through to a selection of his very last works from 2013. There is jewellery. There is a case of little models. There are sprightly things, and things that sail through the day making waves of steel. He can make material seem weightless, and arrangements of shapes so audaciously simple you can’t believe he dared.

Augmenting the Wakefield show, a further exhibition at Yorkshire Sculpture Park takes us from Caro’s earliest 1950s figurative sculpture and drawings, through to works conceived for the outdoors. Brown things stand among ancient oaks. One is like a gazebo. Others recall agricultural equipment, or rusted and varnished steel piano lids (Caro’s Camden Town studio was in an old piano factory, but this may be mere coincidence). They bake in the sun and get rained on. They endure their natural setting, but somehow keep you at a distance. I am unhappy with their scale and ambiguous sense of place, and I am more aware of being in a field than of the sculpture.

He was at his best when he stopped trying. His most vital work affects me and energises me whenever I come across it

The best Caros dance in front of you and you have to dance with them and around them. This involves lots of sidling and bending, squats and pirouettes, circling and shimmying. The sculptures echo and mirror your movements, rather than dictating the choreography. They are invitations, engaging your body as well as your eyes. They tangle you in their world. At the Hepworth, one work snaggles from the ceiling, a butcher’s hook dangling overhead. At his best, Caro works with the space as much as the material (that’s the trouble with the outdoors – it goes on and on). In a gallery or a room, you have to deal with the work: it is just you and it, like a devious stranger.

This is partly why his table sculptures, from the mid 1960s to around 1970, are so good. They are like unruly domestic visitors. They slide to the edge of a table, drop over the side, swerve round and poke at you or flop, dangle and twist into space. Their lacquered colour is sometimes deluxe, insect-iridescent, shimmery and even furtive. They’re like guests wearing disconcerting perfume or whose gestures are unexpected. If Caro exemplifies a certain macho masculinity, these are in drag. Their allure is almost perverse.

Largely, Caro is an artist without much humour, but there is something vicious and funny, disarming and disabling about his best work. Rods poke the air. Things slide off, take up a rhythm, turn a corner and suddenly freeze.

If not for his work from the 1960s, Caro would just be another sculptor doing the rounds. In the 1960s, he let the sculpture lead him. He was at his best when he stopped trying. His art then felt like an adventure. He was at the top of his game. All the plaudits dragged him back into a rhetoric of forms in his later work. I really can’t stand a lot of Caro’s work after 1980. But how many really good years do artists have? He did what he wanted, but couldn’t compete with himself. This is a painful condition, because his most vital work affects me and energises me whenever I come across it.

What goes around comes around, and I have been coming and going about Caro’s work all my adult life. It has always been there, with its steel beams and ship-builder’s offcuts, its grilles and plates and planes, its with-it 1960s colours and its dumb browns and rust coatings. In his long career Caro made great sculpture and terrible sculpture and horrible “sculptitecture” and some entirely feeble paper sculpture. He made things I never want to be reminded of. Yet there is also work that still takes my breath away. At the Hepworth, where his sculptures both retain their autonomy, get a chance to breathe, and enter into dialogues with the building, with one another and with us, you get a chance to really see how good he could be.

Larger and more comprehensive even than the Tate Britain Caro retrospective of 2005, these two exhibitions in Yorkshire are the largest showing of Caro you are likely to see. Even so, much is missing. In some ways, this is a relief. Because his work from 1960 until the early 1970s was so filled with potential and presence, and engagement with it is both so visual and so bodily, the language to talk about it also had to be reinvented. The surprise in Caro’s 1960s work is not in the details but in their connectivity, the choreography. Someone like Wayne Macgregor could dance a Caro with just his arms and hands. Pina Bausch could do it shifting café tables around. Later Caro is heavy ensemble work, shuffling and keeping in line, piling up bodies and arrangements of too much stuff.

The simpler Caro’s work seems, the more complex it actually is. The more worked-at it is, the worse it gets, more trudging and draining. He did not have a late great period, even when he tried to recapitulate, or to introduce new materials, like coloured sheets of Perspex, which made all the steel and bronze blush with refracted colour. It is now a full decade since Caro’s own Tate Britain retrospective, and two years since the artist’s death. This huge though partial overview not only allows us to take stock, but to see what was really there: a wonderfully complex simplicity, forms in conversation with themselves and the space around them. Most of all, with us. Baffling things. I’d give all the tonnage of his later work for a table sculpture I could carry away in my arms, like a kicking and squirming child. 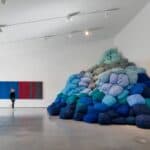