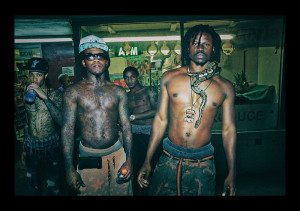 In 1995 a group of Atlanta rappers called Goodie Mobb imortalised the phrase ‘DIRTY SOUTH’ – a term used to describe an evolution in Southern American ‘street culture’ that would captivate a young America and become one of the most significant and lucrative movements in the history of American popular culture. The southern states developed a new take on the Hip Hop scenes dominated by the East and West coasts of america to construct something undeniably raw and quintessentially Southern.

Twenty years on the music created by the ‘Trap’ stars of the Southern States has become a soundtrack to a treacherous but opulent way of life. A lifestyle that has been spawned out of severe deprivation and that celebrates hedonism, excess and romanticises an outlaw mentality. A young, aspirational,  predominantly black, generation, with disposable income, have constructed a vibrant homogenisation of more restrictive counter culture movements to create something unequivocally original. 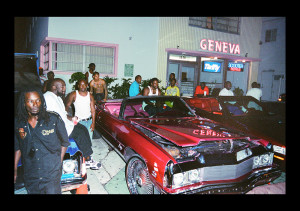 ‘The Gods’, a reference to a term endearment used within Hip Hop and American street culture, is a name given to more senior gangsters and hustlers within a community, but can also be applied to the lavish ambition represented in Wigan’s work. The demographic that are, semi-voyeuristically, captured in Wigan’s images are an insight in to a world where people have literally come from nothing and as a result desire everything. Through material gain and and an excessive lifestyle one is pushed further towards god status.

The Scottish born photographer has spent the last five years documenting the unsung stars and celebrities of Miami, Atlanta and New Orleans. People immersed in an existence which is, perhaps, not seen by those not living it and is only glimpsed at through the polished, insubstantial rap videos pertaining to this way of life. 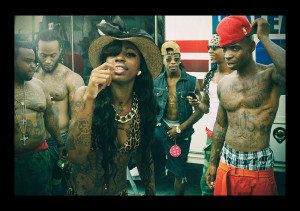 The twenty images in the show have all captured something to make the viewer feel as if they are witnessing something significant. The varied history of, usually white middle class, photographers archiving street culture movements can sometimes miss the mark but can occasionally completely get it. Wigan’s work is in the latter. There is an essence of what it might have been like to see Martha Coopers first documentations of the early graffiti kings of New York, a culture at the time that was so fresh an alien to anyone who was not slap bang in the middle of it.

It could have something to do with the fact that Wigan, as with Martha Cooper, is from such a different background from his subjects that the images are completely objective and untainted by any form of bias. A sort of blissful ignorance resulting in a pure portrayal of a an unchartered world. A world fueled by money, skunk, cough syrup and a desire to live at an immense speed but also one charged with a beautiful individuality and indisputable creativity.