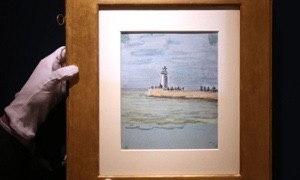 Le Havre, la jetee, by Claude Monet. The previously unknown pastel was discovered taped to another work by the artist bought at auction. Photograph: Philip Toscano/PA

Bargains always go down well with consumers, but a British art dealer was all the more excited to discover that he had unknowingly bought three pastels by Claude Monet for the price of two.

Jonathan Green, a director of the Richard Green Gallery in London, found a radiant, completely unknown third pastel by the French painter hidden behind the two others that he purchased at a Paris auction in 2014.

Green headed home from France with what he thought were two wonderful, rare pastel studies of skies, in which Monet explored fleeting effects of nature and light. It was only later that he discovered the hidden treasure taped up under the mount of one of the sky pastels – a depiction of the jetty and the lighthouse at Le Havre in Normandy, where Monet grew up.

As such works are so delicate, a leading paper conservator, Jane McCausland, was brought in to remove the tape. To everyone’s astonishment, another Monet emerged. “We were very excited,” Green told the Guardian. “Pastels by him are incredibly rare. These are a pointer to his future… You can see his fascination with light.”

Related: The man who made Monet: how impressionism was saved from obscurity

The provenance of the paintings is impeccable – a direct link to Monet. They were his wedding present in 1924 to Anne-Marie Durand-Ruel, granddaughter of his art dealer, Paul Durand-Ruel, the man credited with inventing Impressionism, on whom the National Gallery in London has just staged a major exhibition. These pastels had remained in their family, and the Paris auction marked their first appearance on the open market. The two sky studies were recorded in 1974 in Daniel Wildenstein’s definitive catalogue raisonné of Monet’s pastels. The hidden third image has now been officially recorded and authenticated by the Wildenstein Institute.

Susan Morris, the Richard Green gallery’s senior researcher, said: “It’s very unusual to have three Monet pastels. They really don’t come up that much. It’s also exciting to have it from Durand-Ruel, the man who created Monet’s career.”

All three images are believed to date from 1868. Monet was then a struggling artist who was attracting the attention of sophisticated connoisseurs. Morris said: “It’s a very vibrant period. He’s not the well-known Impressionist, but he’s seeing things in a very fresh way.”

The pastels will be unveiled to the public at Masterpiece 2015, the art fair which opens in London on 25 June, displaying museum-quality works among offerings from over 150 international galleries. The Monet pastels will be sold together for £1.4m.

Green acknowledged that the third image would have boosted the price, but declined to reveal how much he paid for the two pastels. Their catalogue description notes that one of the sky studies “catches the last rays of the setting sun, vigorously dashed in with few reddish strokes”, while the other shows “a bar of orange sunset” and “clouds of moody indigo”. “The boldness of his technique”, the notes say, “is breathtaking.”

In the Le Havre composition, it adds, Monet exploits the paper’s blue colour “to evoke the moisture-laden, azure-tinted coastal light”. Morris said: “It’s done with great economy of means. You can see the light hitting the side of the lighthouse, which is just done in a quick band of white pastel, and another band of grey on the shadowed side. You get a sense of the holiday crowds enjoying strolling on the jetty. It’s mostly black and grey, but there are a few dots of red and yellow as well, which change the whole tone. Although it’s quite airy, it’s also virtuosic.”