‘My drawings are influenced by the fact that I do make sculptures, but they are equally informed by my relationship to language, that is the doubling, pairing, and conjugation generally.’

Hauser & Wirth is to devote both its Savile Row galleries to a major presentation of drawings by Roni Horn. The exhibition is focused on three recent series; Or (2014), Hack Wit (2013 – 2014), and Remembered Words (2013). For Horn, drawing is a primary activity that underpins her wider practice. Her intricate drawings examine recurring themes of identity, interpretation, mirroring and textual play, which coalesce in this significant exhibition. 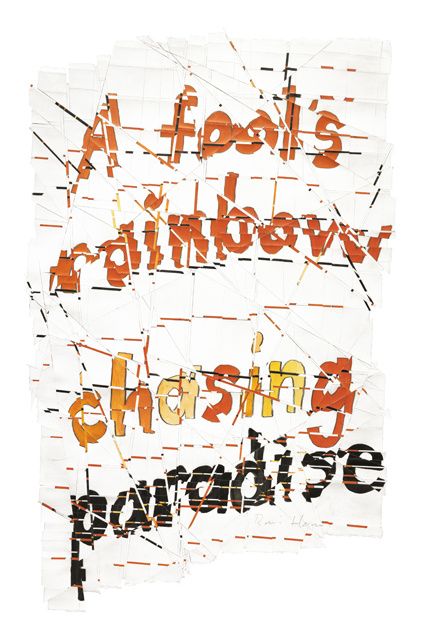 The Or series of 2014 has evolved from Horn’s unique, sculptural method of drawing. She begins with two drawings, or ‘plates’, which she cuts into pieces then reassembles into new, tessellating forms. Through this process, the original drawings are fused into a single mutated and fluctuating composition. The complex patterns that result from her incisions and intersections are discontinuous, without a fixed centre. Upon closer examination, shapes on the paper become increasingly undone and offer up multiple, fluid identities. The freedom of the Or drawings belie Horn’s complex alchemy; the fervently dispersed shapes are in fact carefully constructed. Close inspection reveals pencilled annotations that cover the paper and mark time like a metronome as Horn carries out her exploration of the drawing’s expansive surface. Horn’s preoccupation with language permeates these works; her scattered words read as a stream of consciousness spiralling across the paper. 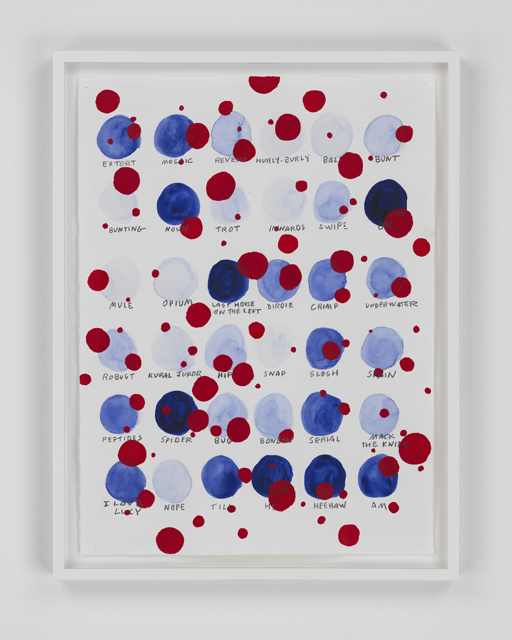 The Hack Wit drawings employ a similar reconstructive method to the Or series, but here the subject matter is grounded in language and linguistic play. Horn reconfigures idiomatic turns of phrase and proverbs to engender nonsensical, jumbled expressions that thwart expectation. The themes of pairing and mirroring emerge as Horn intertwines not only the phrases themselves but also the paper they are inscribed on, so that her process reflects the content of the drawings. Words are her images and she paints them expressionistically, which – combined with her method – causes letters to appear indeterminate, as if they are being viewed underwater. Horn reinvents syntactic rules as she merges two expressions into one; she plays with the similarly plosive and alliterative qualities of ‘desire’ and ‘deserts’ to create ‘just desire burning deserts’, at once a poetic imagining and reminiscent of childish tongue-twisters.

Recalling lepidopterists’ cases displaying insect specimens, Horn’s Remembered Words series presents grid-like sequences of gouache samples on a sheet, each with a single word transcribed beneath. Horn’s system for grouping words is based either on a similarity of meaning, such as ‘enigma riddle question’, or on their phonetic malleability, rolled out in sequence: ‘toxic rustic tic tick luck sock’. Her word associations resonate with the experimental methodology of Gertrude Stein’s poetry. In some of the Remembered Words drawings, splashes of paint partially obscure the ordered blots of ink and chaos ensues. 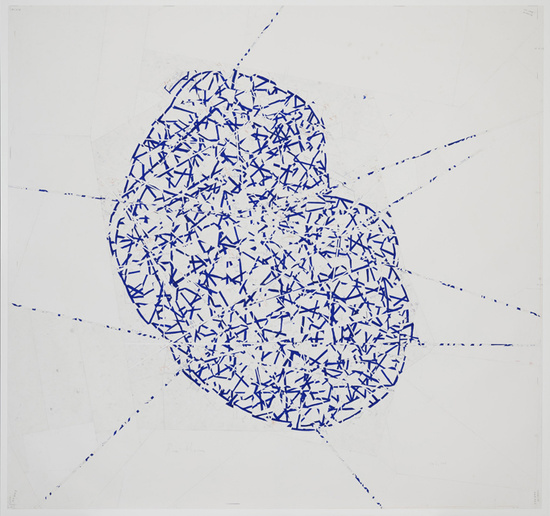 ‘Roni Horn. Butterfly to Oblivion’ is showing at Fondation Vincent van Gogh, Arles, France in parallel with the exhibition at Hauser & Wirth London.