Daniel's Value and Ideas #69: Into the Forest - FAD Magazine
Skip to content 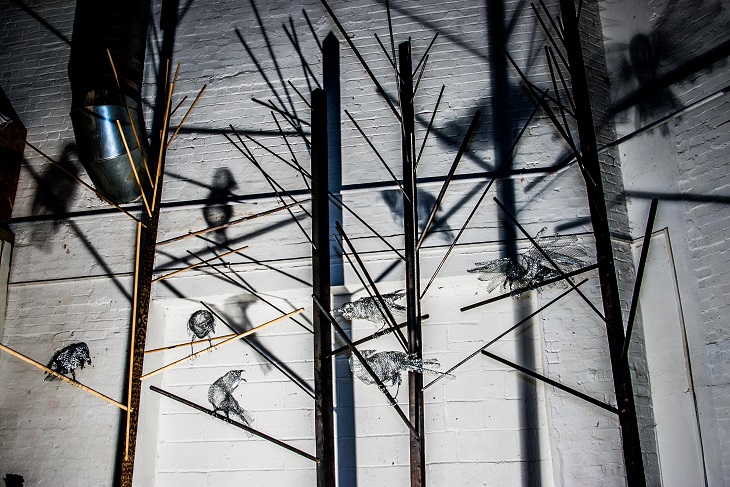 The 14th Century Welsh poem, The Battle of the Trees, tells the story of how the enchanter Gwydion animates all the trees in the forest to fight as his army. Thus the trees rise up in combat, and so unfolds a story which explains the birth of Blodeuwedd the flower-maiden. It is widely thought to encode the central tenets of ancient pagan religions, and artist Conrad Armstrong takes it as the starting point for his new show.

The exhibition, Into the Forest, explores the idea that it is easy to invent a religion through taking a critical stance of the rise of capitalism at the expense of the natural world. It is a complex show that deals with mythology, religion, economics and environmentalism. The central idea is that while capitalism is thought of as the new religion, significantly displacing other belief systems in its rise to dominance, it is only the latest in a long line of religions that have preoccupied humanity.

All religions, it seems, have been constructed, almost entirely invented out of convenient fictions, and yet have served a good purpose in the spiritual fulfilment of man. But spirituality comes at a cost, and in this case the cost is the environment which ultimately feeds us and assures our continued subsistence. Armstrong is not necessarily proposing a return to paganism, but he is strongly encouraging a full-scale re-engagement with nature, which unfurls in this exhibition through a delicate combination of traditional artistic practices and ideology.

The exhibition is a large-scale installation, but the root of everything in it is a series of intricate ink drawings of trees that have been drawn from life in locations around London, Japan and the Isle of Wight. In these works, trees are not the decorative objects of landscape art, they are wizened giants of nature who wear their histories on their surfaces. They are more like portraits than anything else, where the trees are akin to the archetypal man who gets the face he deserves, and they are all tethered in Armstrong’s mind to the time and place in which he drew them.

It is from this life drawing exercise that the rest of the show stems, including the gargantuan tree sculptures that tower into the rafters with their ominous crows attached. In stark contrast to the tradition and delicacy of the drawings, these trees are hewn from timber joists and old mop handles, while the crows are fashioned from wire mesh, all sourced from a local builders’ merchants. One of the trees has an incantation for the dead inscribed into its trunk in the manner of an Aboriginal tradition whereby a totem is created by allowing termites to hollow out a tree trunk. In the ambient up lighting, which casts darkness across the ground, these trees and crows multiply themselves in shadow to create a tortuous forest of hidden lands.

The act of drawing is taken to its sculptural conclusion in a group of works on wood where the tree image has been burnt on to the surface using a laser pen. Similarly, light boxes have trees etched into a film of paint, creating a stark contrast between the light of the image and the opacity of the surface around them. In an exhibition that seeks a return to nature, it is fitting that Armstrong has combined traditional artistic techniques with use of the fire and light to create a forest replete with enchantment.

The striking thing is that in Armstrong’s forest, in its various media and iterations, there is not a single leaf on a tree, as if the new religion has sapped all the life out everything that sustains life on Earth. Old pages of free newspapers have been cut into oak leaves, which line the floors to remind us of the incredible waste of paper that our lust for news entails. And there are leaves, lovingly collected last autumn, around the bases of the trees as a constant sign of the decay in values.

The exhibition is commentary and critique, but it is also a meditation on religions and spirituality, at the same time as being a virtuoso performance in the tradition of landscape art. The installation is intense and beautiful, picturesque and unsettling, provocative and calming, evoking the spirit of religious approaches to nature without ever collapsing into anyone one of them. Armstrong lures you in with the simple, humble tree and takes you on a journey into the forest that does not just make you take notice of the hundreds of trees you fail to see every day, but also captures some of the mysticism of the forest that is the root of much religious ritual. The battle of the trees is being fought every day that deforestation persists, except that here in the gallery Armstrong is single-handedly winning the battle.

‘Conrad Armstrong: Into the Forest’ opens at Kachette Shoreditch on 4th June and runs until 6th June 2015.

Check out the trailer at conrad-armstrong.com