Catlin Art Prize, in it’s 9th year, has firmly established itself as an imperatively important platform and patron for emerging artists. This year’s show of 8 young upstarts previewed last week in the Londonnewcastle space on Redchurch Street – a fitting location to showcase the dazzling maze of inter locking installations.

The Catlin Art Guide compiles a list of 40 artists, and recent BA/MA graduates, from around the UK to provide an essential insight in to an area of contemporary art rarely seen by a majority of it’s inhabitants. From the 40 artists it is narrowed down to 8 who are given the opportunity to have a new body of work commissioned and exhibited as well as the chance to win £5000 in prize money.

The show has been curated into an entertaining maze of work with each artist’s area being satisfyingly connected to the next and done without draining any of the individuality from each body of work. All the artists’ work have points of interest but there are obviously those that stand out much more than others – whether it be for the sentiment in their pieces or for the beautiful execution of their work there are, in my humble opinion,  3 of the 8 which are a cut above. 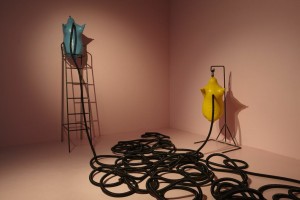 Zhu Tian’s work is the first to be encountered when entering the exhibition. Two rooms with three installations designed to “interrupt spectators”. The first room is filled with bright saccharin colours and casts of dismembered animals. Each cast is connected to coils of black pipe like they were some sort of breathing apparatus keeping the strange figures alive.

The second installation contains an intimidating variable message sign relaying sadomasochistic instructions. The content of the text and the placid, robotic frostiness of the machine create an unnerving atmosphere which solidifies the slightly bewildering theme constructed by the first room. 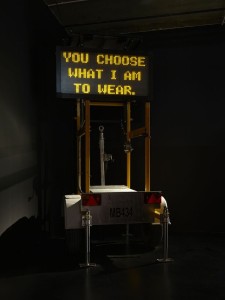 The third installation is a yellow shutter positioned outside of the two rooms but potentially blocking one of the entrances to the rest of the show. The shutter is set to randomly close at different times as maniacal music plays in a dramatic but humorous burst of activity. There is an intended chaos to all three pieces  expressing the artist’s frustration with an “explicitly categorised” modern society. The frustration is manifested in a playful, darkly comic explosion of the audiovisual.

Feilicty Hammond has produced beautiful dystopian imagery commenting on the ravaging redevelopment of our cities. The large graphic print consists of a bleak industrial collage interwoven with flashes of opulence, representing the increasing social divide being established by the regressive construction sprawling across urban environments. The sculpture which accompanies the image blurs the lines between reality and the faux decadent lifestyle that is offered by gentrification. The levels of fake marble blocks decorated with fake vegetation bring, what looks like, ‘post internet’, trippy, CGI into harsh existence. 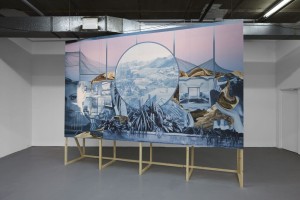 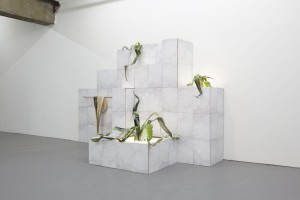 Paul Scneider’s visually stunning installation ‘Bending The Rules’ is a starkly anarchic attack on the retinas. The harsh white room is decorated with the, instantly recognisable, markings of sports pitches. This painfully modern assault on the senses also follows the theme of gentrification and the loss that is being amassed from it. The idea of losing the simple things that one takes for granted to be replaced by things that are unobtainable for the majority. This theme seems to play a huge part in most of the entries to this year’s prize, which is an interesting if not unsettling generational comment. The fact that the artists are so preoccupied by the raw deal being handed to them that it becomes the dominant force behind their creativity. 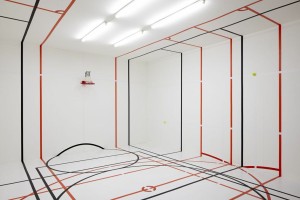 The show runs until the 30th of May and the overall winner will be announced on the 13th. There is also a prize of £2000 awarded to the winner of a balloted vote which is decided by you, so make sure you vote when visiting. All other info can be found HERE.