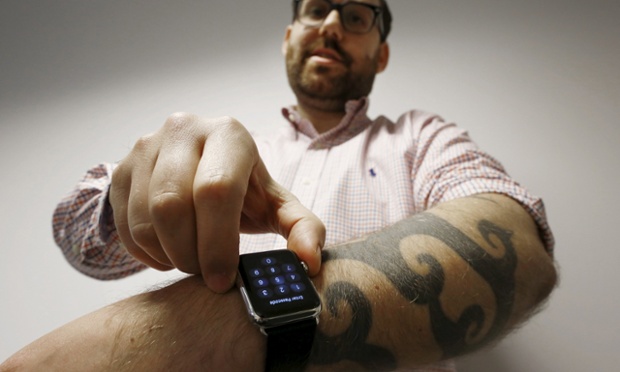 Reuters journalist Matt Siegel inputs his passcode onto his Apple Watch as his tattoos prevent the device’s sensors from correctly detecting his skin. Photograph: Jason Reed/Reuters

This article titled “How #tattoogate has highlighted a wider problem with wearables” was written by Alex Hern, for theguardian.com on Thursday 30th April 2015 11.52 UTC

The launch of the Apple Watch has brought a whole new level of attention to wearable tech and in the process is exposing an issue with one of the technologies at the, er, heart, of many wearable devices.

Tracking your heart rate – be it out of curiosity as you sit at your desk, or as a useful tool in exercises regimes – is one of the key features pushed by the Apple Watch as well as other wearable devices.

But users with tattoos on their wrists have taken to social networks to report problems using the feature.

The optical heart sensor sits on the underside of the watch and uses infrared and green LEDs to determine the wearer’s heart rate. In Apple’s case, it also checks whether or not the watch is sitting on a wrist, which it uses to activate security features such as a pin lock.

The sensor, which is similar to those used in other heart-rate-tracking gadgets such as the Fitbit Charge HR and the Microsoft Band, works by shining green light into the wearer’s wrist. Blood, being red, reflects green light less than the surrounding tissue, and so the amount of reflected light picked up by the sensors on the underside goes up and down with each heartbeat.

Unfortunately, the system is easily confused by a number of factors – including the presence of dark tattoos.

Reuters reporter Matt Siegel found that: “The watch locks on tattooed skin and does not deliver the soft pings that alert a user to incoming messages. The heart rate readings were also significantly different on the tattooed and untattooed wrists.”

A user on social news site Reddit presented another testimonial, writing that “I was about to give up and call Apple… when I decided to try holding it against my hand (my left arm is sleeved and where I wear my watch is tattooed as well), and it worked. My hand isn’t tattooed and the Watch stayed unlocked. Once I put it back on the area that is tattooed with black ink the watch would automatically lock again.”

Unusually, the website for the Apple Watch contains a link encouraging would-be purchasers to “learn about the Apple Watch heart rate sensor, its accuracy and limitations”, and it explicitly warns that tattoos can cause trouble.

“Permanent or temporary changes to your skin, such as some tattoos, can also impact heart rate sensor performance. The ink, pattern, and saturation of some tattoos can block light from the sensor, making it difficult to get reliable readings,” the linked document reads. The sensor can also generate inaccurate reading when exercising in the cold, or doing arhythmic movements during activities such as boxing or tennis.

The issue has already been dubbed “tattoogate” by some outlets, in what seems to be the latest example of Apple’s visibility working against it. Since the problem is endemic to optical heartrate monitors, users of other gadgets have been reporting similar problems for months.

In January, an owner of the FitBit HR fitness band took to Reddit to complain that the device didn’t work on their right arm, with a full sleeve tattoo, but did on their left. And in 2014, an Amazon reviewer pointed out the same problem with the Scosche Rhythm+ heart monitor. But neither of those devices sold in anywhere near the quantity of the Apple Watch which analysts say has already sold to a million customers in the US alone.

It wouldn’t be the first time Apple had come under specific pressure for issues which wound up being widespread in the industry. When the iPhone 4 shipped with an external antenna which could lose signal if held the wrong way, the company ended up publishing an apology even as users chronicled the vast number of non-Apple devices which shipped with warnings against the same problem.

For individuals whose tattoos prevent them from using an optical heartrate monitor, Apple recommends connecting the watch directly to an external monitor such as Bluetooth chest straps. Most Apple Watch owners are unlikely to be enthused by that solution and the larger question of how to make wearables work for everyone remains unanswered.

Apple did not reply to a request for comment.