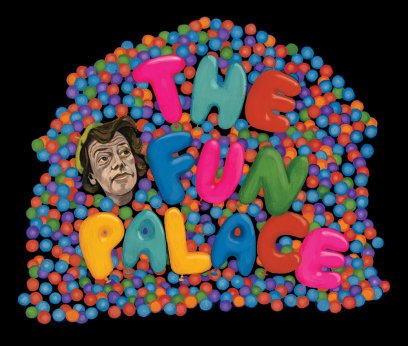 Celebrations for the centenary of the birth of radical theatre director Joan Littlewood continue with Art on the Underground’s specially commissioned film by artist Mel Brimfield and songwriter and composer Gwyneth Herbert, launching tomorrow Wednesday 29th April at Picturehouse Stratford. The film will form part of The Palace that Joan Built, an ongoing, ambitious site-specific artwork for commuters to experience at Stratford Underground station, commissioned by Art on the Underground in partnership with Theatre Royal Stratford East (TRSE).

The project was commissioned to celebrate the centenary of Littlewood’s birth on 4th October 2014, an occasion marked across the country by various individuals, groups and organisations under the banner of ‘Fun Palaces’.

Brimfield and Herbert’s starting point was a desire to unpick and animate the life and legacy of Joan Littlewood. The artists examined Joan’s own writings, academic texts and scripts from Theatre Workshop. They spoke to those she worked with and explored the creative and dramatic heritage that influenced Littlewood’s own work. From these many sources, Brimfield and Herbert have ‘flattened’ Littlewood’s biography into a piece of musical theatre, filmmaking, print and photographic archive blurring fact and fiction into a new narrative of ideas.
?
?At the heart of this commemorative commission is a film with an assorted cast of characters, including performance artist Dickie Beau taking the lead role as Joan Littlewood herself. Witty and irreverent, the film responds to Littlewood’s desire to poke fun at authority. Brimfield and Herbert have imbued the film work with a strong conceptual framework. Structurally, the film is influenced by Sergei Eisenstein and his theory of the ‘Montage of Attractions’ – editing images together to increase their impact – and Theatre Workshop’s ‘Living Newspaper’, a form of theatre that presents factual information in dramatic form. Peppered throughout this film are original songs that convey a musical biography of Littlewood and the aspirations and experiences that formed her life.

Throughout the project, Brimfield and Herbert have mirrored Littlewood’s groundbreaking inclusive approach to the arts, working with a diverse selection of community groups, local schools and professional practitioners across various disciplines. As with Littlewood’s work, The Palace that Joan Built deeply engages with community practice whilst never compromising on artistic intent.

The Palace That Joan Built is an over-arching project that draws on the past while offering a contemporary narrative on the life of Joan Littlewood, presenting it at Stratford station, near to where Littlewood lived and worked for many years.

Eleanor Pinfield, Head of Art on the Underground, said:

“Our commissions are always created in response to London’s unique Tube, bus, and river networks. Our commitment to Stratford Underground station and local organisations is evident in the successive projects we have commissioned for this site over the last nine years. “Brimfield and Herbert responded to Art on the Underground’s brief with an astounding work that embraces the inclusive approach central to Joan Littlewood’s working style. We hope that everyone travelling through Stratford Underground station enjoys this remarkably dynamic and inclusive project.”

The Palace That Joan Built by Mel Brimfield and Gwyneth Herbert is on display at Stratford Underground station until March 2016 art.tfl.gov.uk/projects