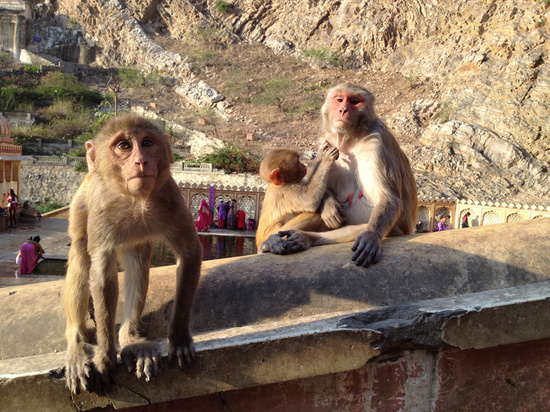 Launching today a new video installation by Diana Thater. The work comprises footage from the Hindu pilgrimage site, the Galtaji Temple, near Jaipur in India. Thater projects images of the 18th-century pavilions and pillars onto the walls and floor of the gallery to create an immersive environment depicting the many monkeys that inhabit the temple in their architectural habitat. The installation will be included in Thater’s mid-career retrospective, opening at LACMA, Los Angeles in Autumn 2015. This year, Thater will also present exhibitions at the Aspen Art Museum, Aspen CO and at San Jose Museum of Art, San Jose CA as part of their Beta Space series.

Thater’s experiential video installations investigate the space between documentation and abstraction, sculpture and architecture, by presenting a mediated reality. In this new work, Thater choreographs an architectural reconstruction of the Galtaji Temple. Built by Diwan Rao Kriparam in the 18th Century, in pink sandstone, amidst low hills, the temple is structured to look more like a palace or ‘haveli’ than a traditional place of worship. The buildings are positioned around a natural fresh water spring and seven holy ‘kunds’ – or water tanks – and waterfalls that create two tiered pools. Within the gallery, projections of the lower pool onto the floor foreground the architectural structure and evoke a tranquil setting. Appearing blurred and faded as they are diffused from the wall, the pools of water occupy a liminal state between reality and imagination.

Thater works with the existing architecture of the gallery, dividing the space into two halves and employing projections to suggest the physical structure of the temple’s domed ceilings, carved pillars and painted walls. In the second space, Thater recreates an area of the temple that is inaccessible to humans, using close-up video footage to bring the viewer into greater proximity with the monkeys. As in previous works, Thater herself features in the footage in order to make manifest an encounter between humans and animals.

The ancient Galtaji Temple is still an important pilgrimage site. Thater examines the reverence with which humans approach the location, in direct contrast to the informal, rampant activity of the monkeys. Thater explores both the tame and wild aspects of the monkeys’ lives and the co-existence of animals and humans. The work is inspired by the Hindu god Hanuman, who often takes the form of a monkey and is worshipped as a symbol of physical strength, perseverance and devotion. Through Hanuman, Thater layers historical, natural and religious references to explore the potentially spiritual relationship between humans and animals.

Artist talk
On 26th March, Diana Thater will be in conversation with Iwona Blazwick, Director of the Whitechapel Gallery, at Hauser & Wirth London. Full details of this event can be found on our news page.