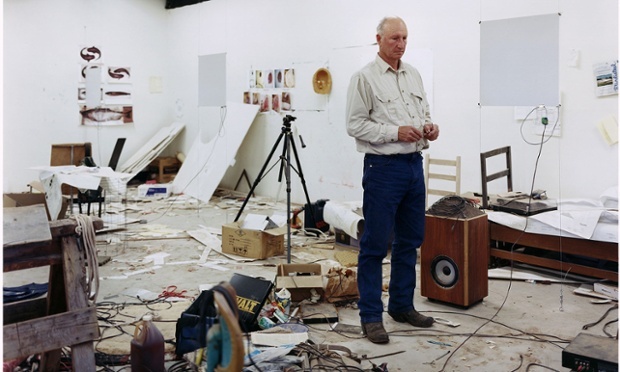 Finding out what a creative act is … Bruce Nauman, 2009. Photograph: Jason Schmidt

This article titled “Bruce Nauman review – an electrifying carousel of ideas” was written by Adrian Searle, for theguardian.com on Monday 16th March 2015 18.09 UTC

The carousel goes round and the voices go round and the dancers go round and I return to Bruce Nauman once again. The Cartier Foundation’s Nauman exhibition in Paris is a mix of older works and new, Nauman at both his most electrifying and enigmatic and his most obtuse and apparently slight.

Nauman is a compelling artist, not least because he constantly asks the question of what a creative act is, at its most irreducible. An idea might begin in nervous fiddling and footling, a distraction or a simple gesture. You get inspiration where you can.

Anger, frustration, anxiety, boredom, distraction, the stray words in his head, repeated thoughts, creative blocks and a sense of emptiness and depletion are all important to his creative process, if it can be called that. Sometimes they become the work’s subject.

In one work, Nauman is playing with pencils in his studio. He holds a sharpened pencil in each hand, and uses them to pick up a shorter, stubbier pencil – sharpened at both ends. This requires steady hands, concentration and a bit of luck. Occasionally you get a glimpse of thumbs and forefingers, and hear Nauman talking with his assistant, Bruce Hamilton, who is filming this delicate game. The work is projected on a grand scale, on two giant LED screens. The pencil-lift on the left screen is performed against a blank white background. On the right, we see Nauman’s scarred old work-table, with piles of papers shoved aside to make space, the studio clutter beyond.

But the act is the same in both instances, the same knife-whittled pencils with their yellow shafts, the same work-bitten fingers. Sometimes the pencils are all aligned across both screens, making a precarious bridge. They sway and rise and fall, point to point, as Nauman keeps them aloft. He checks with Hamilton that the pencils aren’t drifting out of shot. I imagine him holding his breath and furrowing his brow to keep the whole thing going. On the screen on the right Mr Rogers, Nauman’s cat (he gets a name-check in the title – Pencil Lift/Mr Rogers) pads lightly over the table. There’s something about the cat’s poise that chimes with the game.

That’s it. That’s all that happens, over and over again. This exercise in dexterity is the sort of thing you might do to amuse the kids, and teach them something about keeping a cool head and a steady hand. A voice leaks in from the next gallery. “For children, for children, for children”, repeats Nauman, over and over again, filling an otherwise empty space with his deadpan voice. His voice fades, replaced by another, repeating the same words in French. “Pour les enfants, pour les enfants”, it says. What is for children? Fading and flowing between languages, the words become a kind of empty music. Is Nauman telling us that his work is for children, is dedicated to children?

Some years ago, Nauman came across a series of piano compositions, written to accommodate the size of children’s hands, by Béla Bartók: it was called For Children. Nauman has also adapted this idea for his For Beginners (Instructed Piano), a solo played by artist and musician Terry Allen, using, I think, the same instructions as a video Nauman had made of his own hand gestures, which he filmed to the accompaniment of a series of commands. The music proceeds and falters. It is always beginning again, the notes finding their way around the keyboard’s middle C. Tinkling away in a little sunken seating area in the Cartier Foundation’s garden, For Beginners is a series of false starts. Writing and making art can be like that too, groping towards something that won’t or can’t be said or done. Keep going and something might be discovered. There is almost something pedagogic in these works.

Down in the basement of the Cartier, things take a darker turn. A carousel drags taxidermy moulds of deer, lynxes and coyotes round the floor. Beyond, the head of performer and classically trained singer Rinde Eckert is projected three times on the darkened walls, seen both right way up and inverted, and again on six video monitors stacked on the floor between the giant projections.

Nauman’s 1991 Anthro/Socio (Rinde Facing Camera) is one of his most powerful works. Rinde is seen in closeup, repeating three phrases: “Feed me/Eat Me/Anthropology”, “Help me/Hurt me/Sociology” and lastly “Feed me/Help me/Eat me/Hurt me”. I last saw this in Nauman’s major show at the Hayward Gallery in 1997 and it has stayed with me ever since. In a surprising essay in 1999, British painter Bridget Riley talks of the intelligence and humour in Rinde’s face, and that it “ensures that the work is not experienced as either menacing or threatening”, and she describes the polyphony created by Rinde’s classically trained voice, overlayed and competing with itself as it chants the one-man roundelays: “rather like a madrigal resounding in the space of a cathedral.”

Unlike Riley, I find the work immensely threatening, and painful. For anyone who has never experienced Anthro/Socio, it is worth making the trip to Paris for that alone. “All those messages have to do with making contact”, Nauman has said. Developed out of some prints he made in the 1970s, this video installation is an endless appeal and plea for human contact. In the next room, two dancers turn on a mat, which is divided into 16 radiating quadrants. Positioned like the hands of a clock, the dancers lie outstretched, their hands making contact in a play of fingers and palms as they roll over and over, moving their legs as though they were walking on a treadmill.

The camera views them from above. Sometimes the camera itself turns, making the floor and the room the dancers occupy seem to revolve like a dizzying panoptic machine. The scene is projected a second time onto a wrestling mat on the gallery floor. Untitled 1970/2009 is both measured in its slow and regular movement and exhausting to watch. It seems interminable. The quadrants spin like the spokes of a wheel as the dancers move over the face of their contained world, touching and parting, reaching out and coming together, going nowhere and being somewhere. It is a lesson for adults and for children alike.