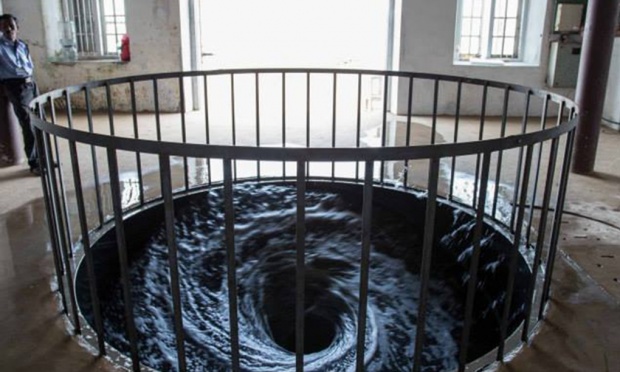 This article titled “Kapoor’s bottomless whirlpool: a sublime spectacle from the magician of modern art” was written by Jonathan Jones, for theguardian.com on Thursday 12th February 2015 14.10 UTC

A pool of dark water swirls in a terrifying spiral, never stopping, never emitting light. It looks black and bottomless. It is the whirlpool to end all whirlpools – a spooky mixture of the vortex that sucked down the Pequod and an illustration from Stephen Hawking’s latest work on black holes. Yet this awe-inspiring phenomenon is an exhibit in an art gallery – the latest sublime spectacle from Anish Kapoor.

What will this dazzling artist think of next? British fans will find out in late March when his next exhibition opens at Lisson Gallery, in London. Meanwhile his black whirlpool, Descension, is being shown at India’s Kochi-Muziris biennale, fenced off from anyone who fancies a trip to another dimension.

Calling myself a fan of Anish Kapoor takes me by surprise; I didn’t used to be anything of the kind. To save people the effort of hunting down my occasional self-contradictions, I confess that I used to berate him as a pompous establishment artist. My suspicion was to do with my generation. As a student, I saw a very early show by Kapoor. It was interesting, but it did not convince me that contemporary art had anything urgent to say about the world. It took artists of my own generation, in shows at the Saatchi Gallery, to make me believe the art of today really had teeth.

I’ve finally forgiven him for not being the artist who made me fall in love with contemporary art. Damien Hirst is nothing to me now, but Kapoor is authentically creative, daring and defiantly bonkers. I fell in love with his work when he co-created that crazy red tower for the 2012 Olympics. It is like a cross between Tatlin’s Monument to the Third International and something out of Bosch’s Garden of Earthly Delights. Some might call it arrogant, but I think it shows an artist at the service of a wild fantasy life.

Kapoor is a romantic. His art evokes the sense of mystery and awe people once got from paintings of storms. Using 21st-century engineering, he stimulates the senses in genuinely audacious and delirious ways. From sky mirrors to his black whirlpool, Kapoor is a magician of modern art who depicts the world of contemporary physics.

How does he keep coming up with powerful ideas when other British artists are so manifestly flagging? Hirst is artistically bankrupt and Antony Gormley designs hotel rooms for the mega-rich. Precious little to celebrate there. But Kapoor is the real thing. His whirlpool is mesmerising. He must be an artist, I suppose. 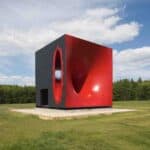