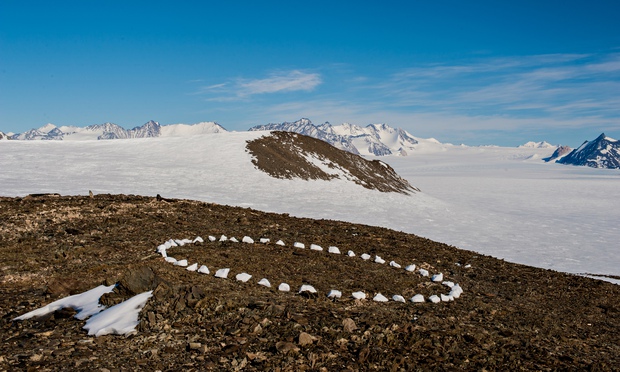 Richard Long’s A Circle in Antarctica, 2012. Photograph: Oskar Str M/Courtesy of the artist

This article titled “Artist Richard Long to stage first show in his native Bristol in 15 years” was written by Maev Kennedy, for The Guardian on Wednesday 14th January 2015 00.01 UTC

The silty water of the river Avon flowing a few yards from the front door of Bristol’s Arnolfini gallery is supplying some of the materials for works of art by Richard Long, the seminal land artist staging the first show in his native city in 15 years.

Time and Space will include new pieces and recreations of earlier work including Ireland, concentric circles made on a beach when he was a student, washed away without trace – like most of his land art pieces – more than half a century ago.

One of the new works will be a drawing made directly onto the wall in mud collected from the Avon, the river which has helped shape his work from childhood. Like many such pieces he has made since the 1980s, as the mud dries out it will crumble into dust, like the fingerprint drawings in mud on pieces of driftwood he has collected.

He is also making a more solid new sculpture in Cornish slate, and the exhibition is to include the drawings, photographs and text work which are usually the only surviving record of some his most celebrated work. He is perhaps best known for his epic walks across the landscape from Dartmoor to Mongolia and the Andes, when he has trampled grass into ephemeral patterns, arranged river pebbles in rows or scraped fragile lines in sand.

A 1967 work, A Line Made by Walking, made while he was still just 22 and a student at Central Saint Martins, is regarded as a watershed moment in contemporary art. In the piece, owned by Tate, Long walked up and down a straight line in the English countryside and photographed the evidence of the grass flattened by his feet.

Long was born in Bristol in 1945 and still lives and works on the outskirts of the city. He won the Turner prize in 1989, has represented the UK at the Venice Biennale, and was awarded one of the art world’s highest honours, Japan’s Praemium Imperiale in 2009.

The exhibition will be part of Bristol’s year as European green capital, and will mark a new partnership between the Arnolfini and the University of the West of England, sharing resources and planning to create more arts events on the city’s harbourside including lectures, workshops and exhibitions.

George Ferguson, Bristol’s mayor, who is an architect, said the partnership would be hugely beneficial not just for the gallery and the university but for the whole city – one estimate suggests that every pound invested in the arts in Bristol generates a four-fold return.

Time and Space at the Arnolfini from July until November 2015.