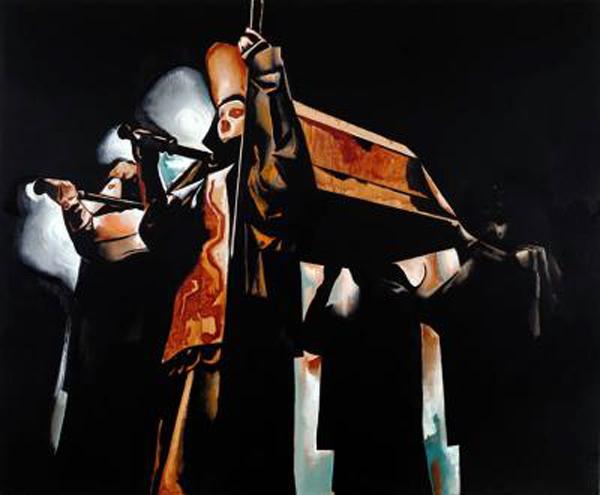 Wilhelm Sasnal’s 2015 exhibition at Sadie Coles HQ brings together an extensive series of new paintings. Diverse in size and subject, the works at once bear witness to everyday life and to far-flung moments from history, mediating between realism and fantasy, figuration and quixotic decorativeness.

In contrast with the often stark and self-contained quality of Sasnal’s earliest work, his latest paintings present vignettes apparently lifted from larger colourful narratives. Certain pictures vividly resemble film stills: the spectre of a cloaked figure silhouetted against a brilliant portal onto a landscape might be drawn from a Biblical or classical epic. Strands of history and folklore alternately combine and diverge. Allusions to Christopher Columbus and his voyage to America are offset by works that summon the dreamlike, disconnected mood of the tales of Hans Christan Andersen (Sasnal has described this generalised tenor –“obscure, psychedelic, obsolete” – as more important than specific stories). The motif of a figure on horseback, occurring in two paintings, alternately suggests an aristocratic hunting scene and a vista of the Wild West. Elsewhere, scope and scale are more confined: we witness the seductive conjunctions of shape and surface created by the sight of a grand piano standing on a cow skin rug.

Sasnal continues to use photographic imagery – drawn from films, art reproductions, pop culture or his own phone – as the starting points for his paintings. These undergo various levels of distortion, simplification or abstraction – as critic Martin Herbert has recently observed, “everything is levelled, everything can slip contextual bonds, everything can speak in troubling depth.” Sebastiano del Piombo’s famous portrait of Columbus – itself a piece of fanciful posthumous speculation – is recast as a swathe of black pigment beneath a grey ground, broken up by the yellowish flashes of the subject’s face and hands. Columbus appears as a human presence transforming (as if by the effects of time and history) into a mere symbol of himself.

The figure of Columbus, the first exporter of Catholicism to the Americas, ties in with the artist’s longer- term fascination with the Catholic Church, especially its symbolic and emotional stronghold in his native Poland. In another telling instance of Sasnal’s conflation of recent and older histories, a crouching female figure (redolent of nineteenth century bathroom nudes) is overlaid by a threadlike swastika. A sedate ritual of Art History finds itself punctured by a sobering emblem from history. On several occasions, however, the emblematic component of Sasnal’s work swells to dominate the scheme; as in a linear scheme of chairs whose decorative, near-abstract aesthetic calls to mind a flattened and stylised Art Deco design.

Twin elements of translation and mistranslation recur in this way throughout Sasnal’s latest works; realism and symbolism alternately collide and merge. An image of fruit arrayed on a table vaguely echoes the still life compositions of Cézanne, yet its grating colours and simple brushwork produce the impression of a copy of a copy, a recreated pastiche. In another translation of an existing artwork, one painting offers a fragmentary view of a statue bearing a large orb. The imagery points to the story of Atlas, condemned to support the world in perpetuity, and this in turn glances back to the theme of Columbus’s traversal of the world (his formulation of the atlas). Collectively, Sasnal’s paintings thereby present history as a sequence of incomplete and intersecting narratives, or as snatched fragments of conversation. “For me”, the artist has explained, “reality is a jigsaw puzzle that’s being put together, but we only see parts – knees, say – and it’s permanently changing. I don’t know where history ends and where the present moment begins. It’s like liquid, or sometimes like mud.”

About The Artist
Wilhelm Sasnal (b. 1972, Tarnow , Poland) has had solo show s throughout Europe and the USA including those at Lismore Castle A rts, Ireland (2013); Haus der Kunst, Munich, Germany (2012); Whitechapel Art Gallery, London (2011); K21, Düsseldorf, Germany, and Centro De Arte Contemporàneo, Málaga, Spain (both 2009); Wilhelm Sasnal – Years of Struggle, Zacheta Narodowa Sztuki, Warsaw (2008); Matrix, The Berkeley Art Museum, Berkeley, California (2005); and Kunsthalle Zürich, Sw itzerland (2003). He w as included in the XXVI Bienal de Sao Paolo, 2004, and w as shortlisted, with four other finalists, for the 2004 Vincent Prize at the Stedelijk Museum, 2004. With Anka Sasnal, the artist haswrittenanddirectedfourfeature-lengthfilms,Huba(2013),Itlooksprettyfromadistance(2011),Fallout(2010),andSwineherd(2009)