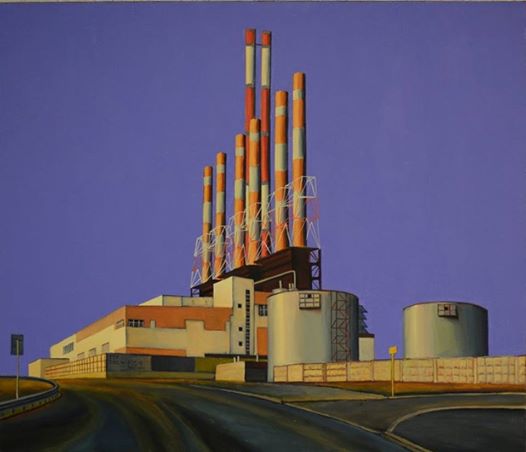 This is the first exhibition in Britain for well-known Moscow based artist Julia Malinina and her student Anastasia Omelchenko – Exhibiting alongside industrial paintings by Russian artists from the 1950-1960s.

Edge of the City exhibition runs to 13th December 2014. Featuring artwork from the main gallery collection of soviet industrial artists including Popkov, Gremitskikh, Klyukin, alongside Malinina and Omelchenko’s contemporary take on the subject.

Baker Mamonova Gallery follows an industrial design in its recent renovation, therefore, an exhibition reflecting this seems befitting of the space.

‘Edge of The City’ is an exhibition of industrial and urban paintings by important contemporary artists from the Moscow Art Academy of Surikov – Julia Malinina and her student Anastasia Omelchenko. As a Professor of Art at the Surikov Art Academy, Julia Malinina is an inspiring figure amongst her students. Her fresh and radical take on the traditional industrial subject has a committed and consistent look; one can feel her deep attachment and passion for the subject throughout.

Aspiring students Anastasia Omelchenko and Kristina Strunkova, among others, have developed a solid art education at the Surikov, and subsequently applied their vision of Urbanism and the Industrial Russian image onto the industrial and city scenes of Moscow and New York. Their paintings bring to life the obscure, austere beauty of the surfaces and structures of industrial buildings, from the pumps and boilers to concrete fences. Julia Malinina’s industrial paintings reflect the subject as a living organism that needs to be nurtured and loved. She has transformed and reincarnated heavy, industrial imagery into the feminine, making her creations intriguing and confident, with glowing gilded skies above pink and blue shadows and smooth, curved surfaces of pipes and chimneys. It is almost like a skillful make-up, applied by an experienced make-up artist onto the derelict plants and abandoned factories, the drying complexes, concrete and cranes, thus gradually eclipsing their own bleak and decaying memories. As an artist, Malinina gives these buildings a voice, a character, an emotion…

These stunning colourful works, both in oils and acrylic on canvas, are exhibited alongside the very traditional industrial images of the Soviet era from Baker Mamonova’s own collection, creating a visual journey and connection between 1950 – 1960’s Russian art and its aftermath.

Over 30 paintings are on display in this exciting exhibition. A catalogue is available directly from the gallery. 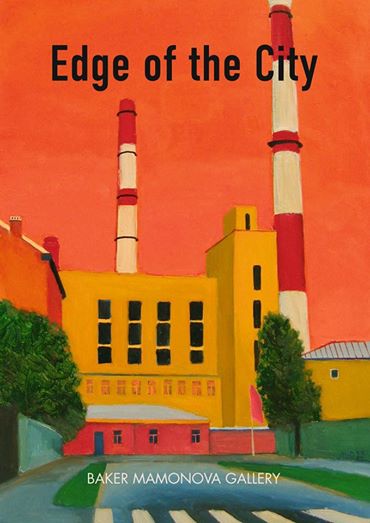 Olga was born and educated in Moscow. Russell was born in Lancaster and studied at the Slade School of Art in London. Having worked in London, New York and Florence, Russell set up and ran his own studio of fine art prints in St. Leonard’s on Sea. After many years of collecting Soviet art, in 2013, Russell and Olga together opened Baker Mamonova Gallery of Russian and British art.

Located in the former space of Brookers hardware store, Russell and Olga plan to extend the gallery’s cultural impact by also re opening the Kinema movie theatre, which is currently located directly behind the gallery. When reopened, access will be via the gallery.

Olga and Russell are focused on re-forming the old cinema space into a multifunctional arts quarter for St. Leonard’s. Apart from an exciting film programme, they plan to include theatre performances, live music on Friday nights, book events, lectures and curated designer fairs that will integrate Hastings and St. Leonard’s based talents as well as London participants. 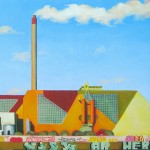 Following the opening of her first UK exhibition at Baker Mamonova Gallery in St. Leonard’s on Sea, East Sussex, I […]