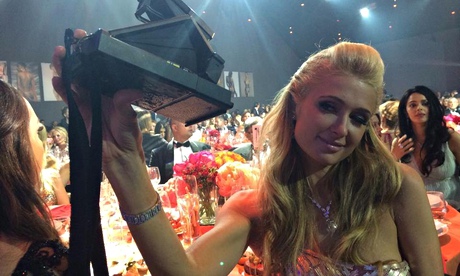 This article titled “Why stars love Polaroid’s retro chic: no risk of embarrassing uploads on the net” was written by Tess Reidy, for The Observer on Saturday 8th November 2014 14.19 UTC

In the wake of the recent celebrity nude photo leak, which saw photos of more than 100 female celebrities, including Jennifer Lawrence, Kirsten Dunst and Kate Upton, released on the internet, another victim, Big Bang star Kaley Cuoco, has declared: “Polaroids are the way to go. No one can get those.”

Privacy is not the only motive for a mini-boom in sales of a product that had its heyday in the 1980s. According to Creed O’Hanlon, CEO of The Impossible Project, which took over manufacturing Polaroid products in 2007, the company is growing much faster and spreading more widely than even the most passionate aficionados could have imagined.

“In the past 10 months we have seen a 75% increase in the 18-25 demographic, with teenagers turning their backs on digital for something more tangible. Over the past six months, we have doubled the volume of films we sell and refurbished more than 30,000 classic Polaroid cameras. Next year, we expect these numbers to double.”

Singers such as FKA twigs, Lana Del Rey and Miley Cyrus are also embracing Polaroids. Stephanie Sian Smith, a freelance photographer who shoots for magazines Vice and i-D, said: “Young people today are more nostalgic than ever and they love the old film look – hence the rise of Instagram. The cameras look cool and the pictures remind us of something from the past.”

O’Hanlon agreed, adding: “The classic square white frame is probably the most instantly recognisable printed photographic format. A new generation of photographers are embracing it because – unlike digital photos – they’re distinctive, one-off, and tangible.”

Grammy award-winner Taylor Swift has also been credited with helping the Polaroid resurrection. Her new album, 1989, which sold 5.8 million copies in America in its first week, features Polaroid artwork, and each physical copy of the record comes with a set of imitation Polaroids.

The revival provides the latest evidence that analogue media are more durable than might have been expected. Vinyl sales are also flourishing and figures last month from the Official Charts Company show almost 800,000 records were sold in the first nine months of this year – the biggest number in almost 20 years.

Founded in 1937, the Polaroid brand was so successful that by the 1960s it was estimated that about half of all US households owned a Polaroid camera. It was also a favoured medium among some of the 20th century’s most inventive artists. Andy Warhol, David Hockney, William Wegman, Chuck Close, Lucas Samaras and Marie Cosindas all loved this photographic process. But by 2001, digital had taken over and the company filed for bankruptcy.

However, more recent fans such as British photographer Mark Borthwick and American travel photographer Mike Brodie continued to champion the technique and brought it to the attention of a younger audience.

Paul Bryant, curriculum manager for media, visual and performing arts at Wiltshire College, says a comeback can only be a good thing.

“For me, there is still something about them. They [Polaroids] cost a lot more and this makes people think carefully about how they are composing or structuring an image and so you are actually thinking a lot more about what you’re doing.”

He has seen a huge increase in the number of photography students wanting to study wet processing techniques. “We have an enormous investment in digital technology, but we also have a massive commitment to old-fashioned print developing and processing. Students love it.”

Beverley Carruthers, BA photography course director at the London College of Communication, thinks the trend is here to stay. “Students are embracing the physical aspect of photography, through analogue as opposed to digital, and Polaroid is a part of this resurgence,” she said. “People want to get their hands dirty and enjoy the experience of print again.”