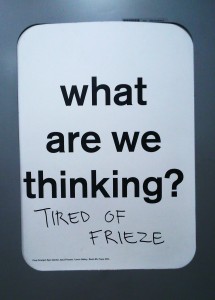 There were a couple of works I had to revisit today. Nina Cannel’s Forgetfulness, a length of underground electric cable submerged in a Perspex tank so full with water it nearly sloshes over the edges, at Dublin’s mother’s tankstation [H7]. This work is both precarious and counter intuitive, but it is so minimal and so simple. The lady at the booth told me that the water should be even higher, so it is flush with the edges of the tank, but it was not possible due to the unstable floor – it is not supposed to spill, but is supposed to come dangerously close to it. This typified how gallerists, as fellow FAD writer Tabish Khan pointed out, seem so intent on not seeming to sell any work. Presumably this is because they want to change the image of Frieze (and the art therein) as a commercial hub. It works, as you find something like this to contemplate in complete abstraction from the reason for its being there.

Galerie Plan B [H5] has a portrait of van Gogh by Adrian Ghenie, who had a remarkable show at Pace London this year. It looks less like van Gogh than it conveys the anguish that we impute to him, but for that very reason, the heavy layers of pigment that teeter on the edge of representation without ever losing their way towards an emotional engagement with the viewer. Markus Karstieß, showing at Ancient & Modern [G4], is probably my highlight of the fair. As I stood again before his ceramic corner piece the casual terminology of contemporary art imploded: there is, especially recently, a lot of talk of ‘alchemy’ as a buzzword to make the humdrum lives of artists appear magical, but very rarely does anything of the spirit of alchemy – except by theoretical transference – enter into the work. Kiefer is very fond of and rather true to it, but we have heard it from Tracey Emin, Damien Hirst and Matthew Barney recently, with little impetus or conviction. But Karstieß does it properly and sincerely by heating platinum to just the right temperature for the materials to converge in explosions of colour that trace the very movements of the process across the ceramic, producing an organic mass that looks painstakingly hand painted.

There is a lot of Martin Creed at this Frieze, which amuses me because his work – although represented by mega gallery, Hauser & Wirth – seems so anti-Frieze in the way that it is s series of repetitive, banal, discursive gestures. But therein is the trick: Creed makes a living by knowing how to play the game without compromising his integrity and collectors love something so disarmingly simple that it appears clever. Creed is showing Work No. 1324 at the addictive Hauser & Wirth booth [D6] and Work No. 732 in the sculpture park. Both of these environments, one a heavily curated domestic scene and the other an entirely free public park, chime with the ethos of Creed’s work as emphasising the ordinary character of this thing we call fine art. So it is bemusing to see that Galerie Rudiger Schottle [B21] has devoted the entire white cube of its booth to a Creed solo presentation; suddenly those A4 sheets hurriedly coloured in felt tip pen look very strange indeed when they are presented as commercial objects in a stark gallery setting. This is a lesson in how Frieze distorts things, making them look better or worse or more strange or more inarticulate than they are.

It is easy to get caught up in the intoxicating flow of the fair, moving from one booth to the next wondering who could possibly afford or want any of this stuff and talking at length to the people who are selling it. But every so often you happen upon an oasis of calm, such as Tobias Mayer’s Frieze Project [P5], which recalls a small-scale version of Richard Wilson’s 50:50 with its metal dish of oil, except that it all has rough wooden edges, a floating ball and is lit with an almost too bright lamp. There is an otherworldly stillness to the piece that transports you to some cosmic realm in which Frieze doesn’t exist.

At one point today I was caught offguard, as I marvelled at a mucky painting that had been thrown into a metal vat full of corn at the Carlos/Ishikawa booth [G26]. It is a baffling spectacle, not least because the painting is appalling, not even in a good way, and there seems to be no reason for the corn. I concluded that the work must be very clever, drawing on some art historical/cultural references I did not understand, or perhaps deeply embedded in the practice of some artist I knew nothing about. Then I was told it was Oscar Murillo; I felt violated and dirty, as if Murillo himself had tried to smear my naked body with one of his own candy bars. That, I suppose, is what happens when you’re not paying attention. Perhaps it proves a point about ignorance or prejudice, but I didn’t have much more time for it after that.