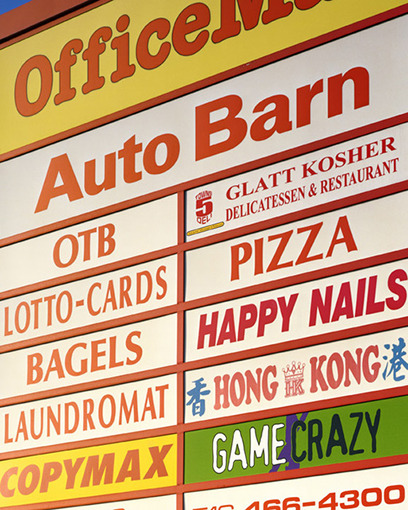 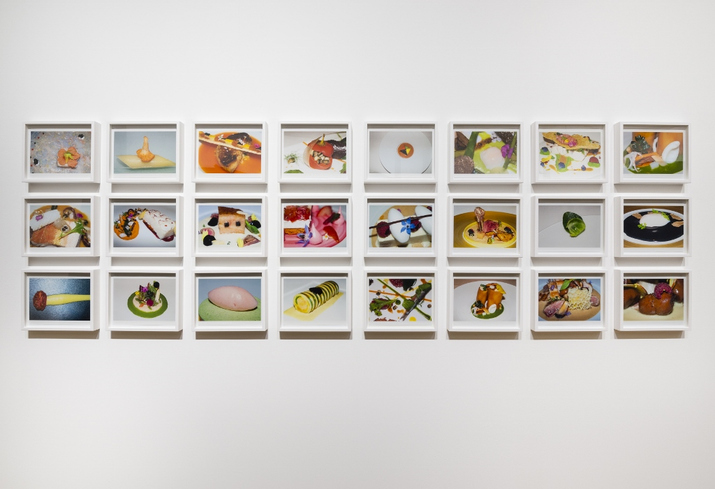 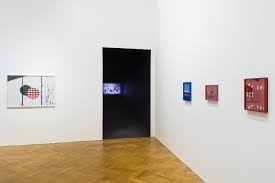 Pace London’s summer group show is curated around the theme of food. Flavoured with humour and a pinch of salt, the theme is a blatant response to the explosion of food imagery in social media, television and publishing. A cream-coloured menu titled “Today’s Specials” lists an eleven course, seasonal selection of artists who push their forks into the issues surrounding the foodie fashion, from environmental and health issues to junk food and pop culture.

Stained food packaging is picked up from the street and placed on the wall by Mona Hatoum who traces Clouds (2008) in greasy stains and recycled paper packaging for chickpeas, peanuts and sunflower seeds are framed by Yto Barrada in the work Papier Plies (Folded Papers) (2007). Both artists look to the discarded forms which are the product of our consumer food culture.

In Mat Collishaw’s Last Meal on Death Row (2011) series, he photographs the final suppers of prisoners before execution, a tradition which now has been banned in America. The photographs evoke the painterly still life traditions of the Flemish Masters, with the drama and chiroscuro of Caravaggio. Sammie Felder, Jr. executed December 15, 1999 ordered one pound of chitterlings, ten pieces of fried chicken (dark meat), ten pieces of bacon, one raw onion, fifteen pieces of fried shrimp, peach cobbler, and a pitcher of whole milk, whereas Chester Wicker executed August 26 1986, chose just lettuce and tomatoes. The photographs have undertones of religious morality along with the gluttony and greed associated with human consumption and obesity.

A monumentally scaled fork leans up against the gallery wall. Expertly twirled in its prongs is a neat ball of spaghetti from which one yellow strand hangs down. Claes Oldenburg and van Bruggen’s Leaning Fork with Meatball and Spaghetti II (1994) enlarges the everyday and urban concept of food in our society to its inflated level. As a continuation from earlier works which took food as their subject matter (such as Pastrycase (1961) a cabinet of papier-mâché pies or The Store (1961–64) in which he sold sculptures of food and household objects), Oldenburg shows that food has been central to pop culture since it entered the mass market and became cult with the advent of Pop. Similarly to Collishaw, Oldenburg played with the concept of the still life, but this time taking it into the three dimension and then monumentalising and placing in public spaces across the world.

Keith Coventry’s bronze sculpture of a kebab machine, Kebab Machine 2 (1998), suggests similar aspirations to grandeur. And why shouldn’t the kebab take on this status? It’s an integral part of British culture. I challenge any London high street that doesn’t have its resident kebab shop, or quite probably two. It’s a confusing part of human nature, how a food that has been proven to have so few health benefits is still so widely consumed. Coventry’s Junk series from 2012 included graphic wall images of a distilled McDonalds french-fries carton. While taking influence from Malevich and appearing very avant-garde, Coventry managed to place something from low consumer culture onto the walls of a high brow art gallery in the same inversion of values.

Eating Landscape (2005) by Song Dong is a video work showing a landscape constructed of fish and meat. The scene is inspired by the Chinese Penjing tradition of miniature decorative landscapes created with natural flora and fauna, but the colours are pumped up and saturated to cartoon status. During the 7 minute video, fingers holding chopsticks enter stage left and right to slowly consume the landscape. An environmental game of chess ensues in a reference to the steady deconstruction of our earth and eco system due to unsustainable farming of food.

Juergen Teller is represented in the exhibition with his 25 works (2010) in which he photographs El Bulli style mounds of foods. They look artificial and inedible, forming colourful islands of food like Song Dong’s Penjing in an Asian-Italian fusion of concepts. Teller contributes here to the gross luxury market where food has become so expensive and obscure that sometimes it’s hard to even recognise. The food is shot in Teller’s typical over exposed style where the imbalance of white irritates the eyes – there is a reason why instagram doesn’t feature the “Teller” filter. His photographic style mocks his subjects, daring them to be flawed, but these puddings are all perfectly sculpted, but why do they look like poison?

Pace London has created a visual essay on the popular food culture which is consuming our society. The exhibition is tasty and easy to digest, but it’s definitely not on a gluten free diet. The michelin starred artists involved expose and explore a darker side to the food fad, leaving a slightly bitter taste in the mouth.