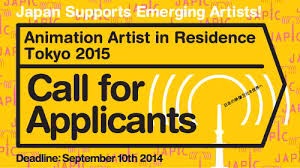 The Japan Image Council (JAPIC) is pleased to announce their program “Animation Artist in Residence Tokyo 2015”.

This project, organized by the Agency for Cultural Affairs (Bunka-cho / Government of Japan) and run by the Japan Image Council since 2010, is an artist in residence program which aims to provide three outstanding young animation artists from around the world with an opportunity to come to Tokyo and create new works while directly interacting with Japanese animation culture. In doing so, we aim to promote both the creation of excellent works of animation and cross-cultural exchange in the media arts.

During their stay in Tokyo, the promising young animation creators from overseas carry out the production of new animated works under the guidance of Japanese animation professionals, visit animation studios and educational institutions, and engage in interactions with people involved in animation or other aspects of culture. The results of these efforts are presented at the end of their stay in Tokyo and after returning to their respective countries at film festivals both domestically and abroad.

Deadline September 10th, 2014 and after the selection process has been completed three successful applicants will be invited to participate. Their period of stay will be 70 days between the 7th of January and the 17th of March 2015, during which time they will receive funds to cover travel, accommodation, educational fees, and other expenses. In the past four years, we have had participants from the UK, France, China, Switzerland, Poland, Belgium, the USA, Finland, and Israel.

For more information about the project: japic.jp/