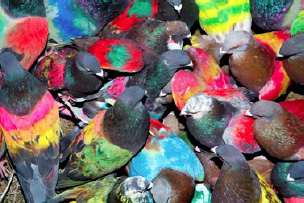 TJ Boulting is to present its summer group show today, where several leading independent art and photobook publishers have been invited to curate the work of artists and photographers of interest to them. In recent years there has been a prolific amount of activity in the art publishing world, with fairs such as Offprint in Paris, specialist bookshops, organisations such as Printed Matter who established the successful New York Art Book Fair, and particularly a rise in young publishers, innovating on small budgets and producing exciting and original small-run publications, often a far-cry from the traditional models seen before in art publishing.

To celebrate this renewed focus on publishing as a fertile area of artistic output, a small selection of art and photobook publishers have been invited to present their chosen artists and photographers, who in the majority of cases they have worked with on publications. It is an opportunity to bring together not only the various artists and photographers, but also highlight the publishers responsible for showcasing their work.

The slim economic return of publishing, especially in the general financial downturn, conversely has led to a passionate and creative output for those who are, against the odds, bringing out new and original publications. The talent often discovered through the selective process of each publisher and the commitment inherent in the process of bringing a project to fruition, can be evaluated in the fact that publishers now in many ways are the new curators.

The small-run of a few hundred copies, hand-made artist books of Riot and Akina Books can sell out almost immediately, and here Akina present work from their forthcoming first offset printed book by Italian photographer Federico Clavarino, whilst Riot present the Ukrainian photographers Vladislav Krasnoshek and Sergiy Lebedynskyy, from their book ‘Euromaidan’, of the Ukrainian riots earlier this year.

Often the artist and photographer has directed this innovative attitude into their own work and self-published, such as Italian photographer Nicolò Degiorgis and his recent acclaimed project ‘Hidden Islam’ of disguised mosques in northern Italy. Bruno Ceschel of Self Publish Be Happy has been a pioneering platform in this area, and presents one of the early photographers he has worked with, Lorenzo Vitturi, who is currently opening a solo show of his work at The Photographers’ Gallery ‘Dalston Anatomy’, in no small part thanks to the acclaimed book.

Harry Hardie and Ben Weaver of Here Press have released several original and unusual projects in documentary photography, and together with Lewis Chaplin, a photographer and also publisher of his own imprint Fourteen Nineteen, have collaborated on a new publication, the protagonist of which is the subject here of Chaplin’s 6×7 portraits taken of him within his domestic environment. Maxwell Anderson of Bemojake presents Tim Smyth from his forthcoming book documenting sinister glimpses, in seemingly banal street scenes and landscapes, of President Assad in Syria. Damien Poulain of Oodee presents slideshows of Viviane Sassen, Pieter Hugo, Charlotte Dumas and his new series of books of female portraits in various global viewpoints. Swedish publisher Melk and gallerist Bjarne Barne presents his own work in forthcoming publication ‘Grapnel Grapple’.

Alix Janta of Adad Books’s monochrome collection of works by different artists ‘Traces’, explores the concepts of technicality and texture through various printing processes and techniques, either classical or their own innovation. Hannah Watson of Trolley Books’s presentation in contrast is ‘Protanopiautopia’, where each artist harnesses the aesthetics of colour, and in particular pink, to depict less than aesthetic subjects in a form of ‘colour blindness’ to their content. Ricardo Cases’s brightly coloured pigeons from his acclaimed first book ‘Paloma al Aire’, and artists Boo Saville and Henry Hudson, whose pink hues disguise a more sinister and less than fragrant subject matter. Aron Morel of Morel Books looks back to the original printmaking techniques of William Blake, created by Michael Phillips, an academic who studied the process in depth, and is presented alongside polaroids taken by Patti Smith of Blake’s death mask.

Finally the London-based Archive of Modern Conflict presents their performance “30minute photo book”, participants will be invited to cut up, stick and re-arrange books and images that the archive has published. This will include works by Larry Towell, Cristina de Middel, Leo Griffin, Bruce Gilden and more.