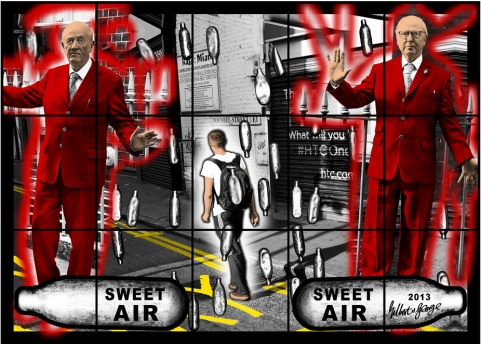 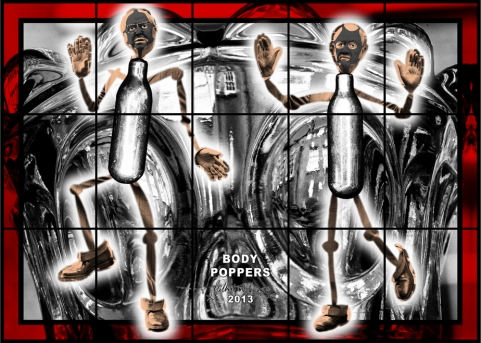 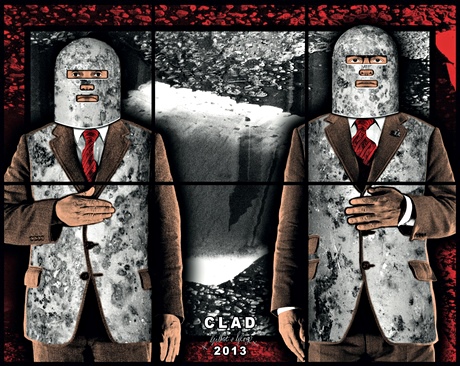 For nearly five decades the art of Gilbert & George has created a visceral and epic depiction of modern urban existence. At its centre are always the artists themselves, who have dedicated their adult lives to their calling as ‘Living Sculptures’ – witness participants within the moral and vividly atmospheric world of their vision, as it is revealed in their art.

The ‘SCAPEGOATING PICTURES’ unflinchingly describe the volatile, tense, accelerated and mysterious reality of our increasingly technological, multi-faith and multi-cultural world. It is a world in which paranoia, fundamentalism, surveillance, religion, accusation and victimhood become moral shades of the city’s temper. Gilbert & George take their place in these ‘SCAPEGOATING PICTURES’ as shattered and spirit-like forms – at times masked, at times as grotesquely capering skeletons, at times dead-eyed and impassive. These ‘SCAPEGOATING PICTURES’ consolidate and advance the art of Gilbert & George as a view of modern humanity that is at once libertarian and free-thinking, opposed to bigotry of all forms and dedicated to secular realism.

Dominating the SCAPEGOATING PICTURES, becoming almost the imagistic signature of this new group of pictures, are images of the sinister bomb shaped canisters used to contain nitrous oxide, also known as ‘whippets’ and ‘hippy crack’ — recreationally inhaled to induce euphoria, hallucinations and uncontrollable laughter. Gathered by the artists on their early morning walks from the side streets and back alleys that surround their home, the presence of these canisters, mimicking that of ‘bombs’ pervades the mood of the SCAPEGOATING PICTURES to infer terrorism, warfare and a stark industrial brutality.

Echoing the maxim of the great Victorian architect, A.W.N. Pugin, ‘Not a Style, but a Principle’, the vision of the SCAPEGOATING PICTURES both affirms and intensifies the historically iconic art of Gilbert & George, in its tireless, emotional and profound engagement with the viewer and the modern world.