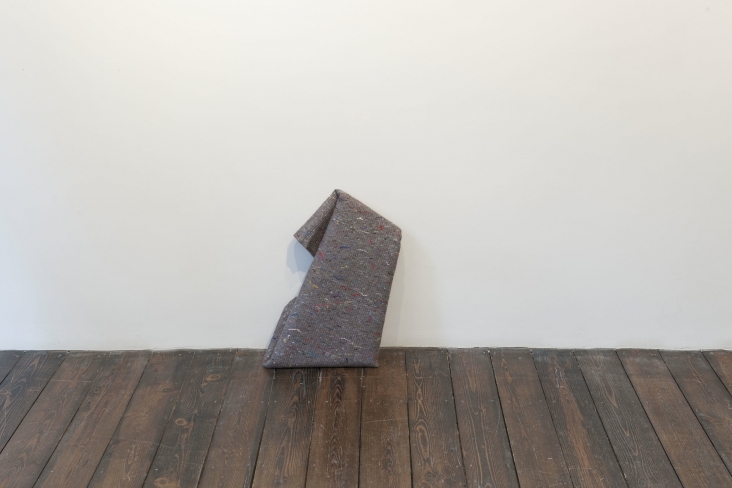 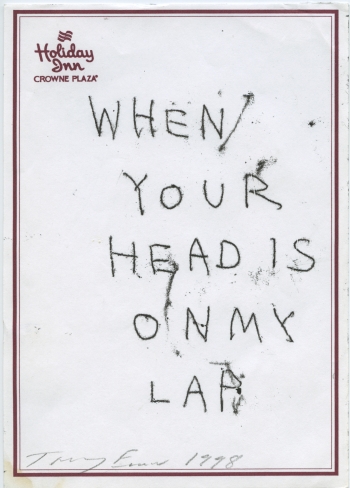 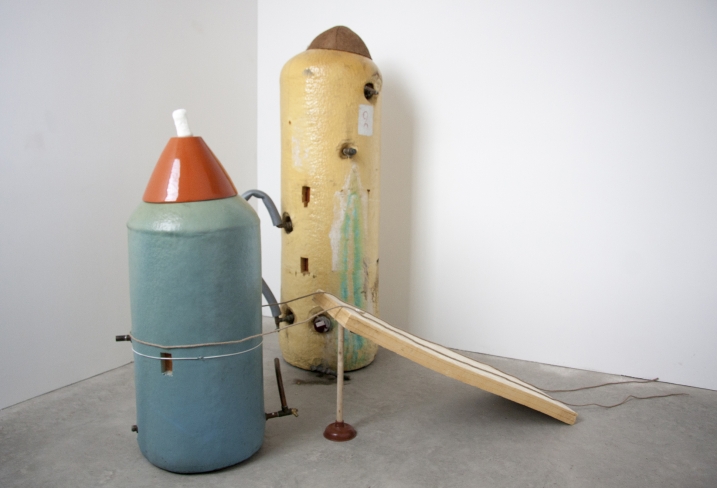 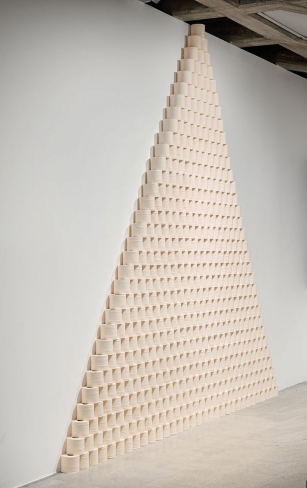 Pippy Houldsworth Gallery is delighted to present Old Rope, a group show curated by contemporary artist Polly Morgan, from 11 July to 30 August 2014. Bringing together new work by Susan Collis, Martin Creed, Tracey Emin, Boo Saville, Amba Sayal-Bennett and Sue Webster, Morgan wishes to explore how each of these artists engages with the term ‘Money for Old Rope.’ The expression is said to come from a time when old ropes were picked apart for their frayed fibres and reused for caulking or stuffing mattresses. Another reading of this expression dates back to public executions when souvenir hunters would pay for pieces of a used noose transformed by its association with an infamous criminal.

Essentially, the expression means to make money or an easy profit by selling something which is perceived as seemingly worthless. Discussing the premise of the show, Morgan explains ‘I am interested in alchemical artists who see value where others see waste, who re-purpose the disposed-of or the disposable, or construct something new out of something old. As a whole, I think it could raise interesting questions about how we assign value to things, be it through function, age or simply proximity to fame.’

Winner of the Turner Prize in 2001, Martin Creed explores the connections between art and the everyday. For the show, Creed has constructed a white pyramid erected from stacked toilet rolls, recently shown at his survey show at the Hayward Gallery. Made according to a pre-determined system, Work No. 1826 manifests Creed’s obsessive interest in visual patterning and systems of order in Minimalist and Conceptual art. Maximising on the visual appeal of repetition, the artist invites the viewer to reconsider the value of even the most banal of objects.

Characterised by confessional, and often profane, accounts of day to day life, Tracey Emin’s work presents an unfiltered portrayal of her identity as a woman. Amassing relics of personal significance, Emin’s use of autobiographical materials lends her work a raw sensitivity. The artist’s deployment of text, often in the form of her inimitable handwriting, introduces a distinct narrative to her work. For the exhibition, Emin has selected a monoprint from 1998 which features the artist’s scrawling script. Printed on a piece of stained Holiday Inn stationary, the work manifests the premise of Morgan’s brief; cursed with the Midas touch, Emin brands anything she touches with commercial and artistic value. Here, the autobiographical becomes the autographical.

Directly inspired by Morgan’s brief, Sue Webster has created a sculpture reformed from a broken Tim Noble and Sue Webster neon; fuckingbeautiful. Webster explains: ‘It’s an ‘unpicking’ of an old but classic Noble and Webster neon that has been re-jumbled into something new – essentially, I’ve taken something representational and transformed it into something abstract.’ Noble and Webster are best known for their transformative sculptures; constructed out of piles of discarded waste, light is pointed onto the assemblages to create projected shadows which resemble recognisable forms.

Formulating her own visual vernacular, Amba Sayal-Bennett’s work destabilises common conventions of communication. Reclaiming everyday materials from scrap yards and the roadside, Sayal-Bennett reformulates objects and uses them as lexical units within her work. Beginning with futuristic, architectural drawings made using
?
ProMarker pens, the artist translates these 2-D structures into real space by identifying physical objects which have the same formal qualities as in her drawings. By bringing these objects together within specific arrangements, Sayal-Bennett creates a sort of visual syntax by generating meaning out of seemingly disparate ‘things’.

Typically used for quick scrawls or meaningless doodles, Boo Saville elevates the humble status of the ballpoint pen by creating vibrant, monochromatic drawings. Using coloured biros, Saville has made three abstract works for the show which refute any association with writing or representation. Discussing her practice, Saville explains that ‘working with ballpoint pens, I have developed a technique of making intense colour field drawings which bridge a gap for me between drawing and painting. In recent years I have found myself eliminating imagery and moving away from gesture to just suggest pure form in the vibrating mass of colour, attempting to erase the idea of a mark and considering the mass as a whole. They are simple works, which are concerned with colour, surface and shape.’

Working with traditional craft techniques, Susan Collis subverts modes of visual perception through the manipulation of everyday objects. In the exhibition, what at first appears to be an art handler’s packing blanket is in fact a precious piece of material embroidered with cashmere, silk and gold thread. Upon recognising the unorthodox materials with which the work was fabricated, the viewer becomes aware of the object’s underlying physical and conceptual value. In an exhibition that centres on the idea of finding value in the disposable, Collis’ concealing of the object’s preciousness provides an interesting antithesis to the rest of the works in the show.

About The Artist
Martin Creed (b. 1968) graduated from the Slade School of Art, London in 1990. His work has been exhibited internationally, including shows at the Museum of Modern Art, New York; the Moscow Museum of Modern Art; the Centre Pompidou–Metz, France; Tate Modern, London and the Museum of Contemporary Art, Chicago. Creed’s The Lights Going On and Off (2000) won the Turner Prize in 2001 and his Work No. 1197: All the bells in a country rung as quickly and as loudly as possible for three minutes (2012) opened the 2012 London Olympics.
Tracey Emin (b. 1963) graduated in fine arts from the Maidstone College of Art in 1986 and has been awarded an Honorary Doctorate from the Royal College of Art, London, a Doctor of Philosophy from London Metropolitan University and Doctor of Letters from the University of Kent. Past exhibitions include those at the Royal Academy of Art, London; Kunstmuseum, Bern; Scottish National Gallery of Modern Art, Edinburgh; Tate Modern, London; Museum of Contemporary Art, San Diego; National Gallery, London; National Museum of Art, Oslo, Guggenheim, Berlin and the 52nd Venice Biennial (representing Britain). Emin’s work is included in many of the world’s most prestigious public collections, including the Brooklyn Museum of Art, New York; British Museum, London; Centre Georges Pompidou, Paris; Denver Art Museum; Garage Center for Contemporary Culture, Moscow; Hara Museum, Tokyo; Museum of Contemporary Art, Los Angeles; Museum of Modern Art, New York; National Portrait Gallery, London; Neue Nationalgalerie, Berlin; Saatchi Collection, London; Tate Gallery, London; and Walker Art Center, Minneapolis.
Polly Morgan (b. 1980) lives and works in London. Past exhibitions include those at New Art Gallery, Walsall; Haunch of Venison, London; White Cube, London; Robilant + Voena, Milan; Warrington Museum and Art Gallery, Warrington; Pallant House, Chichester and Other Criteria, London. Her work is featured in numerous international collections including the Thomas Olbricht Collection, Berlin; Zabludowicz Collection, London; New Art Gallery, Walsall and the David Roberts Art Foundation, London. Morgan’s work will be featured in forthcoming shows at Nevada Museum of Art, USA and Royal Albert Memorial Museum, Exeter.
Boo Saville (b. 1980) obtained a BA from The Slade School of Fine Art in 2004. Her work has been exhibited
internationally, including shows at National Portrait Gallery, London; General Public, Berlin; Studio Visconti, Milan; Zelle Art Contemporea, Palermo, Italy and Cueto Projects, New York.
Amba Sayal-Bennett (b. 1991) gained a BFA in Fine Art from Oxford University in 2012 and an MA from The Courtauld Institute of Art in 2013. Selected for the Saatchi New Sensations exhibition in 2012, she has exhibited at venues including Tate Liverpool; Mallorca landings, Palma de Mallorca, Spain; Barbican Arts Group Trust, London; Piccadilly Place, Manchester and The Old Power Station, Oxford. Her work is included in both the Saatchi Gallery and Ashmolean Museum Collections. Among other awards, she has recently received the WW SOLO Award (2014), Graduate Studio Award (2013) and The Vivien Leigh Prize (2012).
Sue Webster (b. 1967) gained a BA from Nottingham Polytechnic in 1989 and was awarded an Honorary Doctorate from Nottingham Trent University in 2009. As part of the Tim Noble and Sue Webster partnership, she has exhibited solo shows at venues including National Portrait Gallery, London; Tate Modern, London; MoMA, New York and group exhibitions at Tate Britain, London; Royal Academy of Arts, London; The Museum of Fine Arts, Houston; Francois Pinault Foundation, Lille and the 53rd Venice Biennale, Italy. Their work is included in the François Pinault Foundation, Paris; Solomon R. Guggenheim Museum, New York; National Portrait Gallery, London and Olbricht Collection, Berlin.
Susan Collis (b. 1956) received her MA from Royal College of Art after graduating from Chelsea School of Art and Design. Collis has been included in exhibitions worldwide, including shows at The V&A Museum, London; The Israel Museum, Jerusalem; Espacio Minimo, Madrid; Meessen de Clercq, Brussels; The Drawing Center, NY and Museum Bellerive, Zürich. Collis’ work is featured in numerous international collections, including: The Arts Council Collection, UK; National Collection, France (FNAC); Museum of Israel, Jerusalem; The David Roberts Foundation, London and The Zabludowicz Collection, London.